Obama Admin seems more interested in not offending Iran, than stopping a nuke

Obama Admin seems more interested in not offending Iran, than stopping a nuke

How can you enforce if you won’t confront? 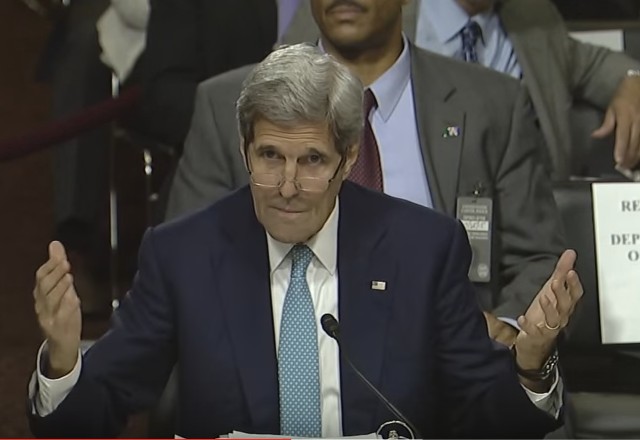 As someone who has opposed the nuclear deal with Iran from the start, the past week has been a nightmare.

Following an International Atomic Energy Agency (IAEA) report that found Iran had been cheating on its nuclear program and had progressed further towards a bomb than previous thought, the United States led the IAEA’s Board of Governors in voting to close the investigation into Iran’s past nuclear work so that the nuclear deal could proceed. Instead of insisting that Iran come clean about its illicit, past nuclear work, the administration said, “good enough” so it could proceed lifting sanctions on Iran.

This week, having gotten away scot-free for its past nuclear violations, Iran decided to push further. Earlier this month Congress overwhelmingly passed and President Barack Obama signed into law restrictions to the visa waiver program. Among the restrictions are that travelers who have been to countries that are designated as state sponsors of terror, such as Iran, are not eligible for the waiver.

But soon Iranian officials were complaining that this restriction violated the nuclear deal and threatened that they would back out of the deal because of it.

How did Secretary of State John Kerry react to this? He sent a letter to Iranian Foreign Minister Mohammad Javad Zarif assuring him that the administration would waive any inconvenient restrictions so that the law would not harm Iran’s ability to do business with the United States.

(The Iranian complaint that the restriction could hurt investment in their country is odd given that Iran has recently banned some 200 U.S. made goods from entering the country and has arrested two businessmen, one an American citizen and the other having American residency in recent months.)

Kerry’s reaction has led to a backlash. Rep. Robert Dold (R – Ill.)  wrote a letter to the secretary, signed by 19 other members of Congress saying:

The facts here are simple: Iran remains one of the world’s leading State Sponsors of Terror, and a new U.S. law – which passed Congress in a bipartisan fashion and was signed by President Obama on December 18, 2015 – states that individuals who have traveled to such a country are not eligible for the Visa Waiver Program. Instead, if nationals of the 38 Visa Waiver Program participating countries have recently visited Iran and wish to travel to the United States, they must follow the procedures that apply to travelers in the rest of the world. This simply means that these individuals undergo the screening traditionally required to receive a visa, and must obtain a visa from a U.S. consulate abroad before entering the United States.

There is no legitimate justification to create a special exemption for Iran from an anti-terrorism and security law that was specifically designed to include Iran. Iran does not get to veto U.S. security measures. Therefore, it is imperative that the Obama Administration enforce the law with respect to the new, bipartisan anti-terror reforms in the Visa Waiver Program and not create a special carve-out for Iran.

In addition to getting hammered for giving into Iran for saying it would evade the visa restrictions, the administration is getting blasted by allies for its weak response to Iranian ballistic missile violations.

The Washington Post which supported Obama twice for president and endorsed the nuclear deal has seen enough. On Monday, its editors wrote:

U.S. officials argue that Iran’s nonnuclear violations make it all the more important that the nuclear deal be implemented. But that ignores the clear connections between the missile launches and Tehran’s ambitions to become a nuclear power. The only practical military purpose of the missiles the regime is testing is to carry atomic warheads. And while missile launches are not prohibited by the nuclear pact itself, the separate resolution banning them remains in effect until the deal is implemented, after which a new resolution takes effect that calls on Iran not to develop such missiles for eight years.

By flouting the U.N. resolutions, Iran is clearly testing the will of the United States and its allies to enforce the overall regime limiting its nuclear ambitions. If there is no serious response, it will press the boundaries in other areas — such as the inspection regime. It will take maximum advantage of Mr. Obama’s fear of undoing a legacy achievement, unless and until its bluff is called. That’s why the administration would be wise to take firm action now in response to the missile tests rather than trying to sweep them under the carpet.

Keep in mind that the administration continually said that the negotiations were only about Iran’s nuclear program and that sanctions for other violations such as terrorism, human rights or other arms violations were acceptable. Here’s Kerry answering Sen. Jeff Flake (R – Ariz.) in July, and pay attention to the part that’s in bold.

What we have committed to do is quite specific. Iran was fearful that having witnessed the hot desire within the Congress for more sanctions that even if we cut an agreement you folks might just turn around the day after and say ‘too bad, we’re coming back with all the same sanctions.’ … So what they really wanted was a clarity that we’re not going to re-impose the specific nuclear-related sanction provisions as specified in Annex II to the JCPOA contingent on them abiding by the commitments of the agreement. So it’s  really simply a clarification to them that we’re not going to come back and just slap them on again, but that absolutely does not mean that we are precluded from sanctioning Iranian actors, sectors, or any actions if circumstances warrant. So all of our other sanctions authorities remain in place, not affected by this agreement. And Iran only says that they would treat the imposition of any new nuclear-related sanctions as the ground to cease performing. But they are clear and we are clear that we have all other kinds of authorities.

Kerry, in order to sell the deal, said that only new nuclear sanctions could not be re-imposed. But now he and the administration are failing to enforce existing sanctions (ballistic missiles) and are actually accepting a bogus Iranian argument that the visa restrictions violate the nuclear deal. (At most it’s a terror-related sanction, but it probably doesn’t rise to the level of sanctions.)

Also pay attention to what he said at the beginning of the quote, “Iran was fearful that having witnessed the hot desire within the Congress for more sanctions.” “Iran was fearful?!?!” There’s no acknowledgement that given Iran’s history of supporting terrorism, abusing human rights and nuclear cheating that there might be good reason to sanction Iran. Just that Congress had a “hot desire” to pass sanctions. That sentence shows the administration’s mindset towards Iran is “we don’t want to upset them.”

(For an extra “treat” watch the clip below and pay attention to Kerry starting at about 4:01. Pay attention not just to his words but his hand motions and inflection to get a sense of the contempt he was conveying to his former colleagues.)

The terms of the deal are awful, and the administration, by putting a priority on not offending Iran, is going about implementing it in the worst possible way.

Obama and his Obami are more interested in NOT defending the U.S. from Iran…or anyone.

“…not wanting to offend Iran…”

Actually, one cannot have a negative goal. One must have a positive goal to move towards. That goal does not appear to be defending the USA. The Administration’s behavior will only make sense if you can figure out what the true goal is, not what it is not.

When you figure out the real goal, all of this puzzling behavior will make good sense. It is only confusing when you think that my goal is the Dem’s goal.

The problem goes beyond Obama and Kerry. Their policies are supported by politicians and an ignorant populace unwilling to call out this administration on its treasonous activities. For seven years not only have they not questioned it, they have actively supported every action that weakens our country. Blind party politics for the sake of winning the argument is a dangerous way to run our government. These people are no longer Democrats, nor are they Socialists. What is happening is not related to an ideology: it is a withdrawal from reality and refusal to think ahead.

“Blind party politics for the sake of winning the argument is a dangerous way to run our government.”

Very well put, Gasper. I fear the same thing is happening watching all of Trump’s supporters.

The answer is simple…. give Presient Hassan Rouhani a toy drone that weighs more that 5.5 oz. as a Christmas gift and if he does not register it, the feds will be all over him.

One of problems facing US and some other western countries the dominance of special interest groups not just in government affairs but also in the news media. We, a the public, learn about event and orient our minds to think in certain ways with facts. If instead of facts we are given bunch of mis-information and lies, we naturally orient our minds based on those and think accordingly. Thanks to the internet, the chances of a special interest group dominating the minds of people is not as great any more because we can access various outlets and determine the facts, although sometimes time consuming. The particular case of new media run by special interest is the blood thirsty Zionists who dominate TV and some broadcast outlets in the US. Lets be aware and let others know that the like of FOX NEWS are not American and unbiased but run by Zionists.

You’ve come to the wrong place, you ****ing Nazi. This is a proudly zionist site, and if you don’t like that you can choke on it.

Obama is a Muslim.
Iran is a Muslim country.
Obama is first and foremost loyal to his religion.
Therefore Obama gives to Iran whatever Iran wants.
(Kerry is just there to be a boob.)

1. There is no rational basis for supposing that 0bama is a Moslem. Claiming that he is one is evidence of a serious delusional disorder.

2. If by some chance he were a Moslem, he’d certainly be a Sunni, and thus would not regard the Iranians as Moslems.

Ksinst, you can’t spell: there should be a dash between ‘blood’ and ‘thirsty.’ (Should be ‘blood-thirsty.’)

But, in another example: Ksinst, you’re a Jew-hating friggin’ idiot. (Notice the use of the dash.)

This is a classified state secret, but the Iranians are blackmailing Kerry, threatening to unleash a media onslaught mocking him for looking like Kermit the Frog after his recent plastic surgery — unless Kerry plays ball.

Any chance Iran’s oil and its effect on the market sans embargo is part of the Obama agenda here?