“These Hands” is a winner 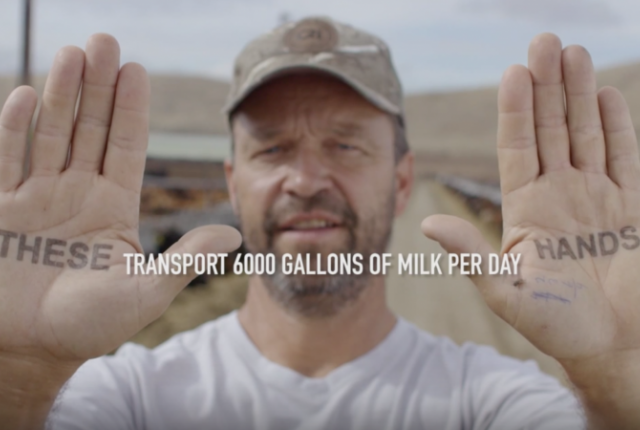 You don’t have to like Republican Presidential hopeful Ben Carson to like his campaign’s new web ad.

According the CBS News, Carson’s campaign dropped a big chunk of cash for “These Hands.”

The 60-second ad entitled, “These Hands” is slated to air for three weeks in the Iowa and South Carolina broadcast markets and features individuals standing in front of familiar American backdrops like the Brooklyn Bridge in New York and the “Welcome to Fabulous Las Vegas” on the Vegas Strip. They have the words “These Hands” printed on their raised palms along with their varied occupations and accomplishments.

What comes as a stark contrast to Carson’s previous ad, entitled “Winning, Not Whining,” where he slammed what he called the “failed tough-talk but do-nothing policies” on Syria of President Obama and Democratic presidential candidate Hillary Clinton. In this ad, he stands silently like the other people, with his palms raised so they form the words, “These Hands Are Working to Heal America.”

Carson campaign spokesman Doug Watts suggests that this “everyday American ad” will resonate with voters because of its unifying message.

“It’s got an appealing human element to it which is the hallmark of Dr. Carson,” said Watts. “It shows the real heroes of America are the people that are everyday Americans that use their hands and wits to make this country great,” he added.

Once battling for the coveted title of “Republican Frontrunner,” Carson is currently polling fourth in the crowded primary heat at just over 13%.

As is stated above, “These Hands” is a winner!” Amazing ad, and I’m very proud of Dr. Carson’s way of conducting his campaign – without his “getting in the mud” with the other candidates and focusing on the issues we face. I firmly believe that Dr. Carson both does “inspire” as his motto says, and I also believe that he can heal our very broken nation. God bless you, Dr. Benjamin Carson! “These hands” send prayers and hugs to ‘Dr. Ben’ and his beautiful wife, Candy, who would make an amazing First Lady. Their love of God and country outshines every other candidate. ~ Romans 8:28

Great, positive ad! Carson has a role to play in the conservative movement (and some more learning to do).

Yep! And, that can be said about all of US!

It’s an almost meaningless ad, inspired, I suppose, by the fact that the title of his most famous book is “Gifted Hands.”

The theme would seem to be all people are equal, or at least of equal worth.

It also keeps his name in the mind of the voters.

It does nothing about his greatest weakness, which is the question:

Well, he still has some time.

Time to learn – he’s compared learning about current events and issues to discuss to medical school and says he can do it. He learned a whole bunch of stuff at a rapid rate one time before.

And time to make some ads dealing with that.

Too little too late. Carson is history. Viewed as too easy to flip flop on issues and not tough enough. Now that security has taken over campaign issues security moms prefer strength over nice.

The man is a saint compared to that slimebag, Trump. I’d follow Carson to the ends of the earth if it meant avoiding Trump.