“Mac is the reason that I do not fear prejudice.” 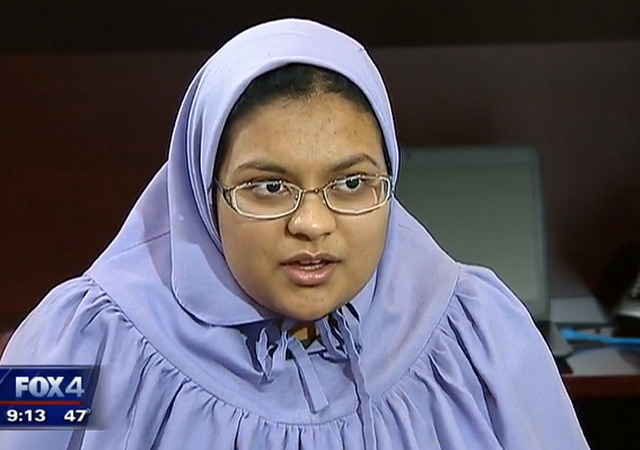 In the aftermath of the Clock Boy incident, Ahmed and many new allies on the left claimed that his arrest was proof of anti-Islam bigotry in a racist country.

Critics around the country cried Islamophobia when 14-year-old Ahmed Mohamed was arrested this year for bringing a homemade clock to school and prompting fears of a bomb.

Now, the Muslim valedictorian of that school is coming to its defense, saying that her experience at MacArthur High was nothing but respectful.

“Mac is not an intolerant place,” said 18-year-old Amena Jamali, who graduated this year.

She told Fox 4 how the school often accommodated her requests for time to pray, and even brought out a letter she wrote to the principal after Ahmed’s story stoked claims of discrimination.

“Everything the media was saying was about how bad Mac was,” said Jamali. “Mac is the reason that I do not fear prejudice.”

“I’ve had four years to test that hypothesis, and come out saying that I’m very proud to have been a MacArthur Cardinal,” she added.

“My principal is a good man.”

Some people have suggested that the entire incident with the clock and its aftermath was orchestrated to make Irving, Texas and America look racist.

They may be right.

I wrote yesterday about the very troubling school and community cohesion language that has found its way deliberately into the K-12 NCLB rewrite legislation that passed the House last Wednesday with no time to read it. http://www.invisibleserfscollar.com/greed-as-the-driver-to-force-education-to-create-socially-engineered-human-beings-under-federal-law/

It is scheduled to be voted on in the Senate this Tuesday. Because of my research into the Tarbiyah Project and its links to the required K-12 implementation I was already seeing, I was looking into what the madrassas were requiring in the UK. The Community Cohesion Guidebook and laws on Racial Equality have all come in since 2002 there. The language in Every Student Succeeds Act and the rhetoric from President Obama and Loretta Lynch this week make it clear they are seeking comparable legal obligations here without admitting that.

Tucking it into the funding criteria of 21st Century Schools halfway through a 1,061 statute is a good way to get the legal authority while that remains largely unknown.

This accompanying interpretation letter from 37 civil rights groups further augments that ESSA is intended to import the UK’s community cohesion obligations and UNESCO’s intercultural Guidelines quietly into the US. http://www.civilrights.org/press/2015/civil-rights-and-education-coalition-ESSA.html

should make that 15 musd lawsuit a little tougher….

I hope so, but I doubt it. Remember, white Americans, especially Southerners, are default racist until proven otherwise, if then.

And Islam is a race, for SJW purposes.