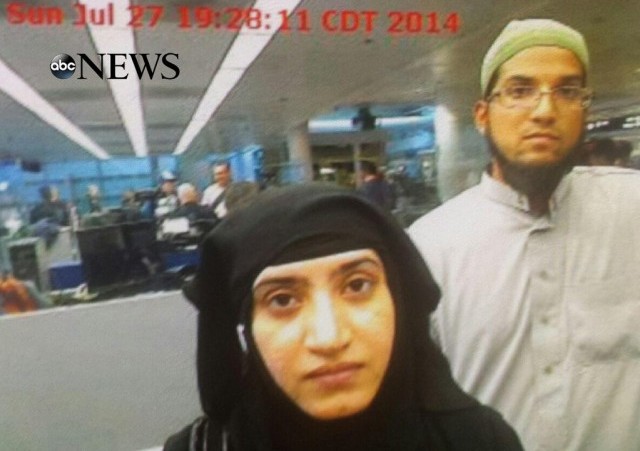 Another day, more chilling information about the San Bernardino terrorists.  The terror duo reportedly left bombs behind that were intended to detonate when first-responders arrived at the scene.

Bombs left at a Southern California social services facility by the gun-wielding radical Muslim couple who killed 14 and wounded 21 were set to go off when first responders arrived, Fox News learned on Monday, in a vicious strategy often seen in the Middle East.

None of the pipe bombs left at the Inland Regional Center in San Bernardino by Syed Farook and Tashfeen Malik in Wednesday’s attack detonated, but the technique has investigators very concerned, sources told Fox News.

“This was meant to kill more, but also scare other future responders to attacks,” a source with inside knowledge of the investigation said. “This was meant to get into the minds of medics and officers who are arriving first on scene.”

In addition to this, the terrorists are also reported to have been “radicalized for quite some time” and to have spent time at local shooting ranges.

The FBI said Monday that the San Bernardino shooters had been radicalized “for quite some time,” but investigators are still trying to determine whether they had links to foreign terror organizations.

Officials also said Syed Rizwan Farook and his wife, Tashfeen Malik, had gone to gun ranges in the Los Angeles area in the days before Wednesday’s massacre, which killed 14 people and injured 21.

Federal investigators did not know how the couple had become radicalized, said David Bowdich, assistant director in charge of the FBI’s Los Angeles office.

. . . . On Sunday, the FBI seized items from Marquez’s home after having spent several hours there the day before, according to neighbors.

A law enforcement source said the weapons were purchased at least three years ago and that there is no paperwork of them being transferred to Farook.

The FBI, on Monday, took Marquez, a friend of the male terrorist, into custody.

In addition to the many Middle Eastern men streaming in and out of the terrorist duo’s garage (which neighbors were afraid to call in due to concerns of being labeled a racist or of being accused of profiling), we’re now learning that $28,500 was deposited, by an as yet unidentified source, into the terrorists’ bank account two weeks before the couple slaughtered 14 unarmed innocents, many of whom had only recently thrown the female terrorist a baby shower .

A $28,500 deposit was made to Syed Farook’s bank account on or about Nov. 18, some two weeks before he and his wife, Tashfeen Malik, carried out the San Bernardino massacre, according to reports.

On or about Nov. 20, Farook reportedly converted $10,000 to cash, and withdrew the money at a bank in San Bernardino. Afterwards, in the days before the shooting, there were at least three transfers of $5,000 that appear to be to Farook’s mother.

On “The Kelly File” tonight, counterterrorism expert Dr. Sebastian Gorka said that this is the “smoking gun” that could tie the deadly San Bernardino attack to the broader global jihadi movement.

Was there really any doubt that these terrorists were being funded by someone or by some group?  We already know that they had tens of thousands of dollars worth of guns, ammo, bomb-making supplies, body armor, etc. socked away in their apartment and garage, and we know that the male terrorist made less than $40k a year and had a wife and baby to support.

How is the Obama administration responding?  Apparently with a bizarre “you’re more useless than I am” contest.  Seriously, I’m beginning to suspect that the Obama admin has set up a competition for anyone who can come up with the most ineffective, empty gesture designed to allay Americans’ (well justified) fears without actually tackling the problem of radical Islamic terrorism.

This week’s entries so far are a shiny new terror alert system and an ISIS czar.

Why is anyone surprised.
Our national security and immigration policies are written by our enemies.
Enforcement of any existing laws has been overridden by an administration committed to ‘fundamental transformation’ of what used to be America.

Trump’s positions are lucid compared with the PC BS espoused by virtually everyone else in politics and government.

What is truly amazing is that Trump gets blasted for saying temporarily halt Muslim immigration, which makes sense, while the left ignores France shutting down 100 to 160 Mosques, which also makes sense.

France has only closed three mosques, not 100, let alone 160. If it ever does close that many, let’s see how the left reacts. But from the reports I’ve seen, the mosques likely to be closed are those that haven’t got the proper permits, and that’ll get you closed down in the USA too.

Ignorance is not something to be flaunted:

Your own source confirms exactly what I wrote. What a maroon.

I’ve fwd this to our Pueblo, Colorado Springs TV stations & media. Fully aware it is unlikely to make the cut for today’s newscast.

“We already know that they had tens of thousands of dollars worth of guns, ammo, bomb-making supplies, body armor, etc. socked away in their apartment and garage, and we know that the male terrorist made less than $40k a year and had a wife and baby to support.”

Fuzzy, where in the world are you getting some of this?

“Tens of thousands of dollars worth of guns, ammo bomb-making supplies…”

Naw. Not from anything I’ve seen. LESS than $10,000…and probably half that…would buy what we know they had.

“…body armor…” I thought that was debunked.

Wasn’t Mommy Terrorist a pharmacist? Was she working?

Good questions, Rags! Apparently, according to a report I saw last night on Fox, he made a little over $50K a year, and no she did not work (nor did she drive). It seems she got side-tracked from her pharmacy studies to study theology: https://www.washingtonpost.com/world/national-security/san-bernardino-investigation-looks-at-the-assailants-relationship-and-their-path-to-terrorism/2015/12/05/c14a4b6e-9b80-11e5-94f0-9eeaff906ef3_story.html

As to the cache of supplies in their apartment, Fox reported that the estimated value of their amassed arsenal was $30K: http://www.foxnews.com/us/2015/12/07/investigation-ties-san-bernardino-shooting-suspects-to-middle-east-terror/ This report says that he made $51k/year. Early reports were probably based on government pay scale ranges for his job.

Although officials have said they were not wearing body armor at the time of their death, the Washington Post reports that much of their equipment is designed to be worn with body armor. https://www.washingtonpost.com/news/checkpoint/wp/2015/12/04/the-weapons-used-by-the-san-bernardino-shooters-were-strikingly-militarized/

They may not have had any body armor. I’m not sure that matters a whole lot, though, except as in indication that they didn’t intend to survive at least one of their planned attacks (they appeared to plan to survive this one, though, given that they left the scene while people were still alive, had the place rigged to detonate when first responders arrived, and were in their vehicle presumably either trying to get away or go to another location).

Anyway, I hope this addresses your questions, Rags. 🙂

I appreciate the response, Fuzzy. But you’ve gotta question reports, even from Fox.

Now, there COULD be more about which we don’t know, by “tens of thousands of dollars” is not supported by reality, based on what we do know.

Hi Rags, Fox reports that “authorities” estimating the cache (not just what they had on them at the time of their death) at $30k (report linked above). Thirty thousand dollars is three “tens of thousands of dollars.” You may be right, but I’m not wrong to base my figure in a news source. 😛

I didn’t accuse you of being “wrong”. I questioned the numbers, and your source.

I argue that its good to look under the hood of reports, even from sources you trust. As we all know, there’s a lot of BS reported. What’s that “amnesia” named…??? Gell-somebody…?

So….. I’ve got a shooting range in my backyard, teach 8 firearms classes a week and I routinely get paid by my clients with wire transfers for large dollar amounts. None of those are suspicious activities, in fact, they are normal activities that are engaged in by millions of Americans everyday.

They also purchase plumbing supplies and let’s face it – those pipe bombs only failed to do their job initially by sheer good luck and later an abundance of caution by responders who were expecting them.

But it won’t be a surprise to most of us.

It might not be the case but the 28k could easily be what is called an “operational fund” for small units. Even out military uses them.

Well the 28K turned into an interesting rabbit hole…. it was a debt consolidation loan but I thought observant Muslims didn’t believe in bank loans because they require interest payments?

Muslims do believe in stealing from infidels. Unsecured debt basically gets wiped out when you die.

We could help to solve the problem if we stopped letting Muslims into the country until we figure out what the hell is going on. Oh, that’s right – you all find such statements to be ridiculous and outrageous.

We know perfectly well “what’s going on”. We had all the information we needed in pretty much EVERY instance of “Lone Wolf” (actually KNOWN wolf) attacks.

We were paralyzed by PC.

That won’t change by “banning Muslims”.

Investigators are pushing the meme that the $28k “wasn’t used for the attack”. I can’t tell if they’re idiots or doing the government’s usual lies when Islam is involved. It doesn’t matter if it was directly spent on weapons because money is fungible. That money, whatever it was directly spent on, allowed the other money they had to be spent on their terror project.