The State Department has no respect for you. 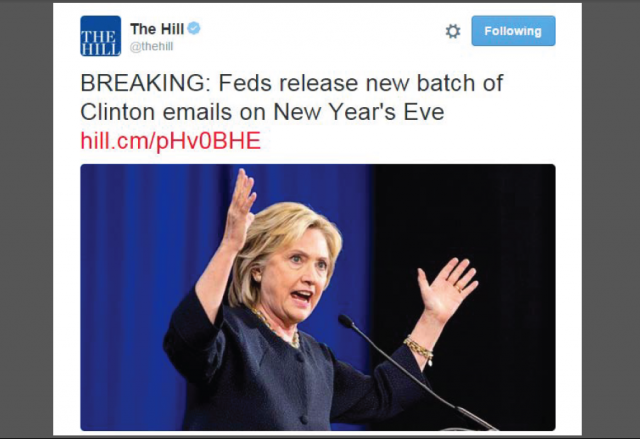 The State Department on Thursday afternoon released a batch of 5,500 pages of Hillary Clinton’s emails online, in its second-to-last tranche of the former secretary of State’s messages.

Thursday’s dump — coming the afternoon of New Year’s Eve — is the seventh of eight court-ordered releases….

The emails released Thursday do not have “fully completed data fields on the FOIA website,” the State Department said earlier in the day.

This means they can’t be easily sorted by subject, sender or recipient — which had been an option in previous email dumps.

In other words, not only did the State Department dump the documents on New Year’s Eve, it dumped documents many of which are not accessible.

The rush to get something online appears to be due to the State Department having failed to comply with court-ordered deadlines. And, via Politico, the number of “classified” emails has skyrocketed:

More than 1,000 emails from Hillary Clinton’s private server during her time at the State Department have now been deemed classified, after the agency publicly released its eighth batch of the messages late Thursday.

The agency released roughly 5,500 more pages of emails from the private email account that Clinton exclusively used during her four years at Foggy Bottom, with an additional 275 messages now upgraded to classified, bringing the total number of classified emails that moved through Clinton’s unsecured server to 1,274.

While most of those were elevated to the “confidential” level, according to a State Department official, two in the most recent batch were upgraded to the “Secret” level, a more sensitive classification for issues that affect national security.

Getting a lot of "page not found" errors when trying to access Clinton emails. Anybody else? pic.twitter.com/l223sik8xp

What emails are available in the dump are now being picked through:

And, as its turned out, we have no respect for them. Especially for dragging us into World War III.

“…bringing the total number of classified emails that moved through Clinton’s unsecured server to 1,274.”

And ONE would be enough to convict her, seems to me.

She needs to be tried, convicted and imprisoned. Good and hard…

Rahm did a massive document dump on the MacDonald shooting today too.

Need a perp walk. Be even better if the guards are 7 foot tall and grasp hitlery by the upper arms and her feet only occasionally touch ground.

looked over a bunch of them and anything to do with tripoli/libya/egypt so heavily redacted they are blank pages.
as far as page not found errors its prob an issue of cache and cdn servers syncing everything I looked at worked fine.

Just recall that you heard this first, here, my personal opinion as to what’ll happen in the Democrat Party race: Biden is the first reserve Dem. nominee, Michelle the second, all depending on how future polls work out.

Here’s my scenario, my hypothetical, such as it is: Obama will offer Clinton a full and complete pardon for everything she, Bill, and all their offspring, have ever done in return for her dropping out the race after her nomination victory. If not, Obama will “allow” DoJ to go ahead with an federal indictment on something, with an expedited aggressive rush to trial; make up your own personal choice as to what charges should be made; evidence will be solid, lengthy, and with tons of witnesses. That pardon document to be sealed till 2276!

So, again in my personal opinion, Hillary would then have an excuse to drop out after she’s nominated due to a severe illness or debilitating illness, or some such other cockamamie reason. That will result in Dem chaos and require an emergency DNC appointment of a replacement candidate for the good of the nation(?), whatever. However, the intent is for Obama to have, in effect, a third term, thus the potential reserve candidates beholden to Obama.

As a prototype of how this could work, an example of this sort of thing, making an edible salad from rotten eggs, look at Minnesota in 1990, Arnie Carlson was appointed as the emergency fill in GOP candidate for governor 10-days before the election, and he WON, serving two full consecutive terms! That’s how the Dems will make lemonade out of sour lemons if JEB let’s them do it!

Lesson from all this: It ain’t over till the Dems are actually out of the White House! Otherwise, it’s over for US!

The dems pulled this stunt when they replaced the wounded Torricelli with Lautenberg. As I recall they had to get some help from a local corrupt judge.

Yep. Only difference is that the Minnesota GOP didn’t understand that their nominee had a thingy bot cavorting with cute youngish ladies around the pool. He got caught by a local news outlet, resigned under severe pressure and Arnie Carlson saved the day; a so-so semi-not so bad, not really good governor.

Sorry to pop your bubble, but many others (including myself) have predicted pretty much the same thing. But we think it will happen before the Dem Convention/nomination, not after. Well before, so Lunchbucket Joe can get running room and the Convention can be a Biden-love fest. We also predict Lunchbucket Joe will appoint Michelle as his running-mate.

But your hypothetical lacks a triggering event, and just assumes Obama will decide to do this without being pushed. I don’t think he’s got the guts. What I think will happen is that in a month or so The FBI Director Jim Comey, who I have no reason (yet) to believe is anything but a straight-shooting public servant, will sit down with the AG Loretta Lynch (who is just an Obama capo) and formally recommend Hillary be indicted. He will also say that if his recommendation is overruled he will resign and go public, and that he has squirreled away in a very safe place a ton of documentation so that if anything happens to him or any of his colleagues (you know what I mean–Obama would have no problem adopting some of Putin’s tactics) it will be published. With this being inevitable, Obama will tell Hillary the jig is up, she will have a convenient health issue and drop out of the race, Obama will pardon her (and only her) for “humanitarian” purposes, and will, as you predicted, seal the records until doomsday, putting them in Yucca Mountain with his own college and Passport records. Then, for good measure, after he is sworn in, Lunchbucket Joe will appoint Obama to the Supreme Court and the march to Cuban-style “democracy” will continue without missing a beat.

Ladbrooke’s in London is taking bets.

Oh, it’s the same triggering event, I just didn’t see the need to state it.

As to your larger point, time will tell. Minnesota (Arnie Carlson) and NJ (Lautenberg) demonstrate that a wave of pity and horror can drive voters to the polls. My scenario also presumes that King Lord “O” might be believing the MSM’s hysteria over Hillary until the truth can be ignored no longer, hence that’s the 2nd trigger for my version.

OBTW: Arnie wasn’t a great Gov, just better than his DFL opponent. NJ had a slightly different reason for its almost debacle; Torricelli was an ongoing bum whose accumulated gross misbehavior finally burst through the Dems protective press coverage.

My theory is that the billionaire Democrats told Biden he could not run. They’d “invested” a big chunk in the Clinton Foundation and they want her to be the nominee. The only bet they have to win now is that Comey does not resign and cause a stink BEFORE Hillary secures the nomination. If he resigns before that, it could create a groundswell of support for Bernie and he may be able to steal the nomination from her. If Comey resigns after she has the nomination, it will not matter. Democrat hacks will flood media and airwaves talking about this was a blessing in disguise. The classification system over classifies information. So in the name of “transparency” it must be reformed – and besides what real harm was caused by her sending confidential information over her secret server (I’ve already seen this argument made).

I think Democrat rank and file voters are mostly driven by greed. As long as their candidate promises to steal someone else’s earnings and give it to them, then they don’t care much about the candidate’s character, integrity, or corruption. They are greedy blind partisans.

They will not care one whit about Hillary’s “victimless” crimes.

Isn’t this an ongoing crime-there seems no terminal point yet.
Isn’t production required; isn’t this contempt. Can I blow off court ordered production? And why was not a rep for the state department available for a contempt proceeding as the judge articulated in July [I believe]. This is why Trump resounds with the people.

See? I KNEW no good would come of Obama’s executive order granting federal workers a half-day off on Christmas Eve. Otherwise, no doubt they’d could have finished this job on time.

Hillary will no doubt try to cheat in this election if that is the only way she can get the win…But if Trump taps into this… voters are even more unlikely to support here.

here’s the most recent show of anger towards 0bamacare
https://www.youtube.com/watch?v=fpdtEvvfKCs

0bamacare hatred has only increased over time. majority of voters will only give Democrats a short opportunity to repeal or void the ACA before they get severely punished again in 2016 …I’d say between now and 4 months before the end of the coming presidential election is the dems only opportunity to not face another backlash. …if Dems haven’t repealed or done anything about the fines/penalities by then… the democrat party nominee is going to suffer a lot.

Aren’t the emails being released based on a court ordered schedule? It really isn’t the State Department’s fault that the last day of this month falls on a Thursday before a long holiday weekend.

It also doesn’t help the “document dump” narrative that the State Department fell short in the number of emails released and will be releasing thousands more early next week. In addition, November’s email release took place on Monday, November 30 after the Thanksgiving holiday.If the State Department were dumping documents, why didn’t it also do so in November? Similarly, Mrs. Clinton has no say in the release of the documents; it was an issue for the DOS and the court. Some of the commenters don’t seem to know this.

I think it is a disservice to a serious website like Legal Insurrection to disingenuously push distorted narratives that your writers know to be misleading. Let the story rise or fall on its own merits without your putting your thumbs on the scales. I’d like to know that I can trust what I read here.

Keep this up and the JUDGE will eventually tire and JAIL SOMEONE.

I would suggest that the State Department lawyer bring his toothbrush to any new court proceedings.

Why isn’t this Federal Criminal in Federal Prison awaiting Trial. Any non-Politician or ordinary citizen would be long tried and sentenced.

Y’all need to respect and obey the more equal animals.