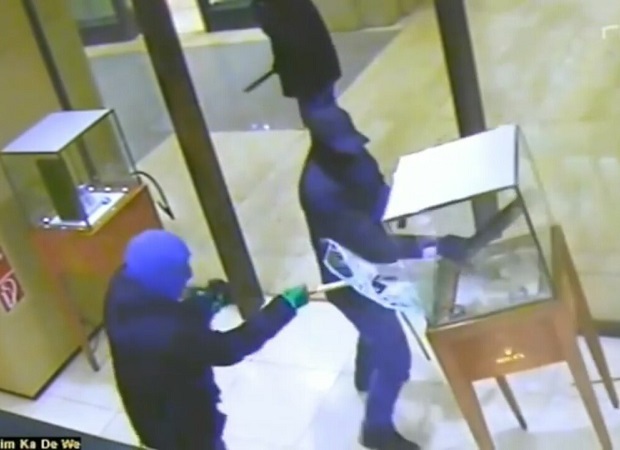 Last week, German Chancellor Angela Merkel received a rockstar reception at her conservative party CDU’s annual convention in Karlsruhe. Merkel received a nine-minute-long standing ovation from the party delegates for a speech in which she refused to put a fixed limit on migrant intake. Germany is expecting to take as many as 1.5 million migrant this year. With each migrant expected to bring 4-8 family member in the short-term, the real number for 2015 alone could be well over 7 million.

[I]n her keynote address to more than 3,000 Christian Democrat (CDU) delegates at a party congress in Karlsruhe, Ms Merkel effectively threw down the gauntlet to the rest of Europe and insisted that it share the burden in helping to solve the problem.

“We face the biggest refugee crisis since the Second World War,” she told the party faithful. Appealing to other EU members for help she called for solidarity, saying that Europe faced a “historic test” and insisting: “The fight for a unified Europe is worthwhile – of that I am deeply convinced.”

Ms Merkel conceded that overcoming the problems facing Germany, which has accepted over a million migrants in 2015 alone, amounted to a “giant task”.

But the Chancellor flatly refused to accept demands from within her own ranks to set an “upper limit” on the migrant influx, or for the installation of Berlin Wall-style fortifications and controls on Germany’s borders.

If Merkel is putting up a brave face and telling other European countries to follow Germany’s example and open their borders to migrant influx as well, many Germans at home are in panic mode. Across Germany the sale of firearms is reaching an all time high. Not only guns and firearms, even self-defense products like pepper spray are difficult to get on the open market, as the demand for the product rose by almost 600 percent in just last two months. According to German magazine Focus, stores are asking customers to wait upto 5 weeks for the delivery of pepper spray. In neighbouring Austria, 70,000 more firearms were sold over the last years figures.

European political class and bureaucrats in Brussels are watching this new trend with great unease. European Commission which had long been talking about restricting gun ownership in Europe, is now openly pushing for a new gun control law:

A [European] Commission statement released on November 18 , five days after the [Paris] attacks, said the plans to reform Europe’s gun laws would be “significantly accelerated in light of recent events.”

As well as the expanded gun register, the measures included a ban on certain semi-automatic firearms, tighter rules for the online acquisition of guns, as well as standardized EU criteria for marking guns and decommissioning starter pistols, to make it difficult to convert them into functioning weapons.

“Today’s proposal … will help us tackle the threat of weapons falling into the hands of terrorists,” said Commission President Jean-Claude Juncker in November. “We are proposing stricter controls on sale and registration of firearms, and stronger rules to irrevocably deactivate weapons. We will also come forward with an Action Plan in the near future to tackle illicit arms trafficking. Organized criminals accessing and trading military-grade firearms in Europe cannot and will not be tolerated.” [Deutsche Welle, December 21, 2016]

There is rising discontent over the  EU measures. An online petition against the proposed EU gun law has managed to get over 280,000 signatures to date. The statement in the petition called the EU draft proposal aimed at regulating law-abiding gun owners as an “an insult to our civil liberties and to the intelligence of the EU citizens as a whole.”

Germany under Merkel’s leadership has long surrendered its migration policy to people smugglers, criminal gangs and islamist radicals. As government and law enforcement authorities act helpless in face mass migration, there is rise in support for grassroots movements like the anti-Islamization group PEGIDA and anti-EU party AfD (Alternative for Germany).

Established political parties have failed to put a lid on this growing dissent in Germany and are now fearful of a backlash. Despite having the most restrictive gun ownership laws in Europe, Germany with its 5.8 million firearms still remains the one of the most heavily armed countries in Europe.

“Today’s proposal … will help us tackle the threat of weapons falling into the hands of terrorists,” said Commission President Jean-Claude Juncker in November.

Funny thing, though, terrorists are going to get guns. They kinda have a common trait in not giving a good spit about law.

Crime IS and ALWAYS WILL BE a demographic issue. 3% of the population in the USA commit a disproportionate amount of the crime. If you exclude young black men from the crime stats – the USA homicides are on par with Western Europe.

If you add large numbers of young Muslim men to Germany – it’s homicide rate will soon rival the USA.

Muslims butchered helpless French citizens protected by one of the strongest gun controls in the Western world. Now the fascist european leaders want to help the Muslims butcher their citizens by ensuring they are unarmed and helpless.

Well, well. It looks like the Germans don’t really want to be dhimmi. German women apparently do not want to be “comfort women” for jihadis.

I cannot imagine why they would resist joining the glorious future of Europe.

The fever of ruling-class panic is rising around the world. They want nothing to stop their self-righteous march to Utopia. As they increasingly squeeze us for more wealth to redistribute they naturally seek to disempower us and our capacity to resist. So on one hand we get socially destabilizing and dangerous immigration by fiat, and when we have no choice but to protect ourselves (because of politically correct and incompetent law enforcement) the calls grow for total citizen disarmament. It’s a mad rush to reduce us to pitiful, helpless serfs who can only look up to them in fear and supplication.

Everyone, including Merkel, knows that a well-armed citizenry keeps tyranny at bay, including the tyranny of voting non-citizens.

When the demand that guns laws become so restrictive so as to basically disarm a nation’s people those doing the demanding fully expect the State to become all powerful and omnipresent. Good luck with that Angie.

Does Merkel think that goodwill or good intentions will stop the misogynist plague called sharia law? This plague wants to cover the earth.

Germany can dehumanize its people by taking away their guns or they will be made to submit to sharia law which dehumanizes people.

“Today’s proposal … will help us tackle the threat of weapons falling into the hands of terrorists,” said Commission President Jean-Claude Juncker in November.

Perhaps the ruling class (EU or USA) realizes that their armed guards just might join the citizens should things go western. The citizen capability phase may have gone over the tipping point. Every day that goes buy makes these “disarm the citizens” proposals more futile and the ruling class is starting to panic…but not change.

A disarmed society is at the mercy of the “rule of the jungle” or in this case “rule of jihad”. The elites, in disarming the public, are betting that, out of fear, the people will turn more toward governmental control of their lives for protection. This has not worked in USA as the people have had the choice of self-defense and suitable weapons as a personal viable option to governmental control. Governments see only the collective, not the personal. Individuals do not have rights… only classes of people have rights in their world.

Germany had another big push at anti-gun laws within the last 100 years.
A famous German, with initials AH, said the following in 1942…
“The most foolish mistake we could possibly make would be to allow the subject races to possess arms. History shows that all conquerors who have allowed their subject races to carry arms have prepared their own downfall by so doing. Indeed, I would go so far as to say that the supply of arms to the underdogs is a sine qua non for the overthrow of any sovereignty. So let’s not have any native militia or native police.”
Clearly, if you want to control to populace, you must remove their access to guns.
Stalin was a big proponent of gun control too, as was just about every dictator throughout history. It just makes it so easy to enslave/kill whoever you want.
Of course we Americans achieve our independence by rejecting gun control by the monarchy that attempted to control us in the mid 1700’s. Some of us are students of history and recognize this. Alas, many are not.

A siren song of gun control in the US is that the Founding Fathers never would have permitted “assault-style” weapons for the populace. I submit that there was greater parity in the past in the arms of the populace and those of the organized militia/army. Banning certain well established styles of civilian arms on appearance weakens the balance of power between the electorate and those that wish to do harm to the Constitutional fabric of the Republic. The elite wish us clothed in sack cloth, when Kevlar is required.

That Hitler “quote” is fake.

The NAZI Germany ban on Jews owning guns wasn’t fake. Just as the Gun Control Act of 1968 was based in part on understanding and incorporating German NAZI gun control laws by Senator Dodd,Sr. Isn’t fake. No need for anyone to cook up false statements when the real laws and actions abound.

No, it isn’t. Where did you get the idea that it was? Snopes confirms it as true, and attributes it to Hitler’s Table Talk, 1941-1944: Secret Conversations.

Hitler never said what Twanger attributed to him and put in quotes. It’s a fake quote. Even your own Snopes link says that.

You’re lying when you say “Snopes confirms it as true.” Snopes says it is “mixed,” and says “as far as we know no one has ever turned up a source documenting that Hitler literally said this (or something very similar).”

Using fake quotes takes away from an otherwise valid argument. You don’t need to embellish it with fakery.

You are lying your face off. And you’re a stupid liar too, because anyone can follow the link and see that you are lying. Snopes confirms Twanger’s quote as 100% accurate.