Hillary says Trump being used in ISIS videos for recruitment 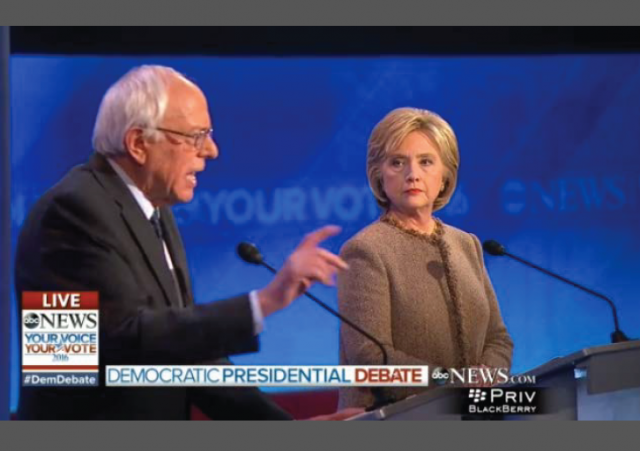 Sponsored by ABC News, the New Hampshire Union Leader has joined the network as a co-sponsor for tonight’s debate.

Compared to Republican presidential debates, the Democratic field is tiny. Only three candidates will debate one another tonight: Hillary Clinton, Bernie Sanders, and Martin O’Malley.

But the spotlight is largely on two: former Secretary of State Hillary Clinton and Vermont Sen. Bernie Sanders.

Heading into the debate, Hillary Clinton is leading the pack by wide margins, with Sanders trailing the former secretary of state by 31 points in a new ABC News/Washington Post poll.

With data breaches, law suits, and allegations of DNC favoritism towards Mrs. Clinton, this should be quite the show.

.@MartinOMalley just told by @MarthaRaddatz to sit in corner and be quiet #DemDebate

Clinton says Trump "is becoming ISIS' best recruiter," says videos of him bashing Muslims are being used to recruit. #DemDebate

Is that really true? That ISIS has been showing Donald Trump videos to recruit people?

Unclear if Trump was referenced in ISIS recruiting videos but guess who was: Bill Clinton. https://t.co/ZJC0ZDaFDG

.@HillaryClinton strolling back late to #DemDebate stage after @DavidMuir and @MarthaRaddatz start w/o her #TTT16 pic.twitter.com/9Mz0OAVe99

No evidence for Clinton claim that ISIS is already showing Trump in recruiting videos https://t.co/NVzR4YOHmE pic.twitter.com/56lk4w1g4k

Because there is no good answer. https://t.co/SZnvxsIAW6

.@HillaryClinton On ISIS Strategy: ‘We Now Finally Are Where We Need To Be’ #DemDebate https://t.co/Yhr5SYsN8e pic.twitter.com/eRdSBml27S

We’ve included a few different Twitter feeds for your entertainment. You’ll find those beneath.

Oh dang, I watched a stupid movie on the Roku box and forgot all about the debate…

Who gives a shit? Hitlery was to be the socialist nominee. Bernyie was just to TRY and gin up interest without having Hitlery actually having to talk. When Hitlary talks, she LOSES voters. I imagine Obama has instructed the FBI to charge her with a felony about June so Biden can take the nomination. Who could vote against Uncle Biden?

Has Trump started feasting on this yet?

This scummy woman has finally opened the door to The Donald’s wrath. Hopefully, he’ll step through, and with both barrels blazing.

Bald faced lie about something (Trump being used in ISIS videos) in prime time, then issue a half-hearted ‘apology’ about it at midnight on Twitter.

I call it the Candy Crowley Special.

Looks like Granny wore a ragged housecoat to her Saturday night debate.

She must have known no one of consequence would be watching.

Hard to believe Hillary would lie about a video

Hillary strolling in late was not scripted at all to highlight her “lady parts”. I’m sure this was all spontaneous after being poll tested and focus grouped.
Hillary sycophants like Donna Brazille and Cokie Roberts will surely give an unbiased review of this debate.

Did you see that point in the debate where Hillary’s likability rating skyrocketed?

It was that moment just before she found her way back to the podium . . .

So, did Rachel Maddow start her fact-checking mission yet like she did on the GOP debate?