“The militants decided to leave after the passengers’ show of unity” 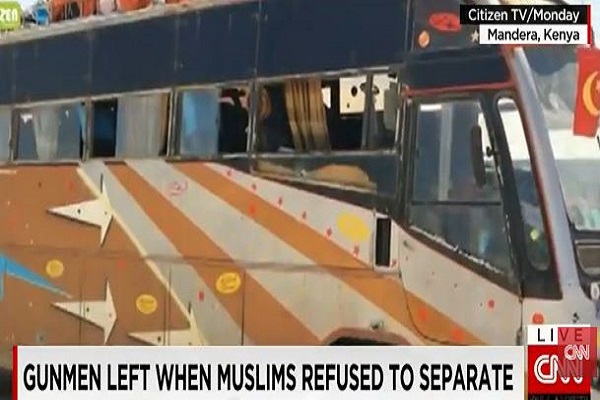 When al-Shabab—an al Quada affiliate—terrorists boarded a bus in Kenya and ordered Muslims to separate from Christians so they could slaughter the Christians, the Kenyan Muslims refused.

A group of Kenyan Muslims travelling on a bus ambushed by Islamist gunmen protected Christian passengers by refusing to be split into groups, according to eyewitnesses.

They told the militants “to kill them together or leave them alone”, a local governor told Kenyan media.

At least two people were killed in the attack, near the north-eastern village of El Wak on the Somali border.

The Somali based al-Shabab group says it carried out the attack.

When al-Shabab killed 148 people in an attack on Garissa University College in April, the militants reportedly singled out Christians and shot them, while freeing many Muslims.

Last year, a bus was attacked near Mandera by al-Shabab militants, who killed 28 non-Muslims travelling to Nairobi for the Christmas holidays.

“The locals showed a sense of patriotism and belonging to each other,” Mandera governor Ali Roba told Kenya’s private Daily Nation newspaper.

The militants decided to leave after the passengers’ show of unity, he added.

For its part, the Daily Nation has more details about the harrowing incident from their exclusive interview with the bus driver.

The driver of the bus that was attacked by Al-Shabaab militants in Mandera on Monday has said that it was by “God’s miracle” he and his passengers survived in the ambush that left two people dead.

Mr Shukri Farah also confirmed that Muslims who were in the bus gave clothes to non-Muslims in the bus to disguise them as Muslims preventing what could have been a massacre similar to last year’s when 28 passengers were killed.

. . . .  He said the bus was full and the non-Muslims were advised to hide under the seats and others asked to mingle with Muslims.

“After dressing like Muslims it was difficult for the attackers to identify who was who and they did not get into the bus to ransack it. I think it’s because they were only four,” said Mr Farah.

“I was carrying more than the bus’ capacity because I picked other passengers from a bus that had broken down along the way and for these attackers to start screening us one by one could have proved difficulty as they seemed to know that we always have police escort.

Asked if Muslims shielded Christians he said: “These are bad people; you can’t dare bargain with them. The only thing was that Muslim women gave their clothing to Christians and on alighting from the bus the Christians stood in the middle of the crowd but nobody said anything to the attackers,” said Mr Farah.

A man-bites-dog story. Very unusual — in most attacks, the Muslims separate quickly and willingly, and often the attackers give a quiz to make sure.

Let’s see…. The above BBC article refers to the Garissa University College attack (148 killed) and the bus attack near Mandera (28 killed) both of which involved sparing Muslims.

And then there was the Westgate Mall attack (at least 68 killed) and the assualt on Mpeketoni (48 killed).

Oh, and don’t forget the attack in Bamako just a few weeks ago (20 killed).

Take some time to read and educate yourself. (Might be useful to learn a little about Islam also… Remember, if you can answer some very basic questions, you might save your own life.)

It’s a start. There are Muslims that are trying to reform Islam. When this sort of thing becomes common enough to no longer be news, there will be a possibility of peace.

Nonsense. Islam cannot be reformed unless its books, founder, and imams are destroyed. Ther is no way to reform what is presented as direct revelation from Hell (since it’s Islam we’re talking about).

This is just about Muslims exhibiting some humanity, some fellow feeling. For once. They usually have none for anyone but themselves, which is why this deed is a big deal. For Jews and Christians, this is the norm. Next time, we’ll see.

Unpossible. All 1.6 billion Moo-slimes are all slobbering monsters who want only death and to see Christian blood shed, nothing else. This is obviously a taco lie!!!11!!1!

Apparently only bigots speak the truth.

There are a great many muslims that are opposed to the violence perpetrated by people of their faith.

There are a great many muslims that silently support the violence perpetrated by people of their faith.

There are a great many muslims that cheer the violence perpetrated by people of their faith.

From many polls we know that the absolute majority appear to support violence in some fashion towards westerners and non muslims. By their actions we know these things.

Acknowledging this is not bigotry.

The CNN reporter insisted on describing the terrorists’ actions as divisive, trying to divide the people. I believe it’s called genocide.