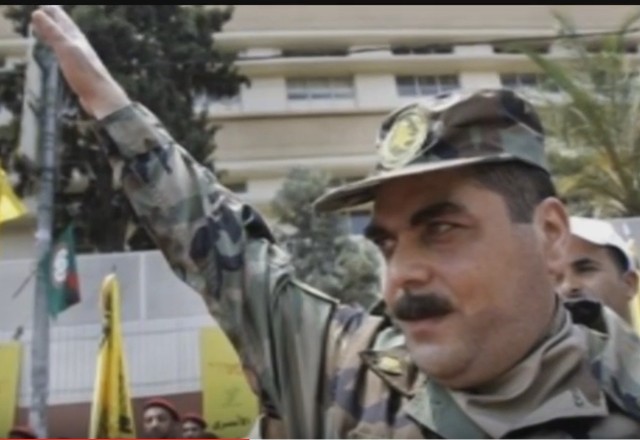 Iran and its allies have taken a beating in Syria according to recent reports.

Perhaps the most spectacular was the airstrike overnight that killed the notorious child killer, Samir Kuntar and eight other terrorists in a Damascus suburb. Prof. Jacobson rightly called Kuntar “among the most notorious and vicious terrorists,” for shooting Danny Haran to death in front of his four year old daughter, Einat, and then killed her by smashing her head against a rock with his rifle butt.

Needless to say Kuntar was treated as a hero by Hezbollah, who traded the bodies of IDF soldiers, Eldad Regev and Ehud Goldwasser, to free Kuntar in 2008. He also received the Syrian Order of Merit from Syria’s dictator Bashar al-Assad shortly after his release.

But Kuntar’s killing is just a symptom of the recently reported problems plaguing Iran and its allies who are backing Assad.

Early last week it was reported that as many as one-third of Hezbollah’s fighting force have been killed or wounded in Syria. That was followed by a report on Friday that Iran’s Islamic Revolutionary Guard Corps had withdrawn most of its troops from Syria after suffering dozens of casualties. The withdrawal of the Iranians has put additional pressure on Hezbollah as the Russian airstrikes have not been as decisive as Hezbollah had hoped.

Avi Issacharoff pointed out two weaknesses exposed by the recent news. On an operational level he wrote, “the assassination is further evidence — after the assassination of Jihad Mughniyeh in January and the killing of Hassan al-Laqis in December 2013 — of the ease with which intelligence services can infiltrate the organization.”

The other is a manpower shortage about which he wrote, “In the past few months, Hezbollah has launched a massive draft of youths 17 and older to make up for its losses. However, the recruits are not at the same level as the trained and sophisticated fighters that filled its ranks just a few years ago.” Thus he doesn’t expect that Hezbollah will seek an all out war with Israel right now.

To be sure Hezbollah is still a threat to Israel with a massive terror infrastructure in place, financed by Iran (especially in the wake of the nuclear deal), as the red alert sirens in northern Israel (including Nahariya, the scene of Kuntar’s crime) today attest. The Jerusalem Post reports that the IDF believes that three rockets landed in Israel causing no injuries.

In addition to Iranian forces and Hezbollah, Iran has reported to be importing Shi’ite fighters from Iraqi militias, Afghanistan and Pakistan to boost its pro-Assad forces.

Iran supports Assad to maintain a land connection to Lebanon and Israel’s border. In recent weeks the cost of that support has gone up.

Samir Kuntar’s dead, but the Iranian threat, however degraded is still there.

Iran has to expect things to go wrong when Barry is n vacation.

It gets even worse: Kuntar was in consideration as the next GOP Speaker of the House.

I see you’re pissed about the Omnibus, too…

Since we went through so much trouble to disengage from Iraq–electing the O partly on this promise–let’s stay out. May Iran have many, many, many bad weeks in Syria; and may the same be true of the rebels.

Even the so-called “moderates” whom the O and Shrillary Shroooo want to support are implicated in democide against religious minorities. They’re just other offshoots of the whole Muslim Brotherhood-Qaida-and worse movement. Maybe we should put in place a generous policy towards any Christian (possibly Yezidi) and, if any are left, Jewish refugees. But let these thuggish Iranian and Saudi proxies kill each other off.

May he enjoy his 72 virgin goats while eating all the ham the demons can stuff down his throat.

And with a Hitler ‘stash no less. Classy.

Kuntar is shown here auditioning as the Syrian TV spokesman for a deodorant product: “Targeted by a drone, by I’m dry as a bone. Old Spice. Spray or roll-on.”

He did not get the part.

The article fails to identify who was the bomber, presumably it was us. Naturally the source of the intelligence is also not identified but since the USA does not have any human intelligence, it must have been mossad.

Pretty sure it was Israel…

Somebody tell me then why sending U.S. ground troops to that useless 16th Century hell-hole of death that is today’s Syria is a good idea.

Obama’s unilateral financial aid package to Iran could not have come at a better time for Iran, what with low oil prices and it’s forces under strain. Thanks Obama!

Not really O/T; I am not going to defend Trump. But every single ccandidate from both parties including those I despise will have to deal with a host of foreign dictators who kill their critics. So while Trump went too far in his appreciation of Putin’s endorsement (in my fallible opinion) I wouldn’t fault any candidate for failing to insult him. At some point they’ll have to interact with aforesaid dictators. It makes no sense to demand they poison the well ahead of time.

On the other hand and in sharp contrast the Joooo hating Pali loving (yes I know this is not exactly about Palestinians) loving crowd is never called to account for their love ever of child killers.

And unlike a President the coice of who they will work with is entirely one of choice.

Sorry for the artifacats. My phone doesn’t give me the same options to review before submitting.