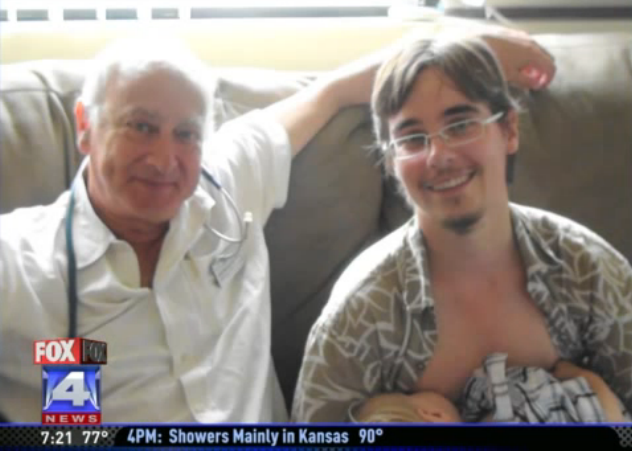 Three weeks ago the Huffington Post published an article detailing the distress of transgendered parents who breastfeed, “The Troubling Erasure of Trans Parents Who Breastfeed.”

The article describes the way gendered pronouns and attitudes are excluding men who nurse, and the legalities associated with challenging the heretofore female-centric endeavor of breastfeeding.

In particular, women who have had chest surgery and now identify as men, described how they are made to feel unwelcome in breastfeeding circles. Here is one example from Canada:

When the article was shared on the Facebook page of the leading breastfeeding resource website KellyMom.com Friday afternoon, more troubling erasures occurred — of KellyMom fans’ comments.

Even in the highly specific internet outpost of breastfeeding, dissent will not be tolerated. Anyone expressing objection, concern, or even questioning the policy of deleting comments from the site, was censored by KellyMom page administrators.

In fact, at the top of the post, KellyMom.com administrators wrote:

Great discussion of the importance of inclusive and gender-neutral language when discussing issues of nursing and ways that the community can be more inclusive of all parents on this journey.

***COMMUNITY NOTE*** KellyMom supports all parents on their journey to breastfeed/chestfeed. Any comments that are not inclusive of all parents within this community will be removed. Thank you!

For KellyMom.com, the calculation that to allow an actual “discussion” is far too dangerous; the P.C.-police might be out patrolling this afternoon. So rather than allow an actual discussion about the content of the article, they deleted. With abandon. (You have to love the cheery sendoff, “Thank you!”) Of course KellyMom.com has every right to delete comments they don’t like — that’s their business. 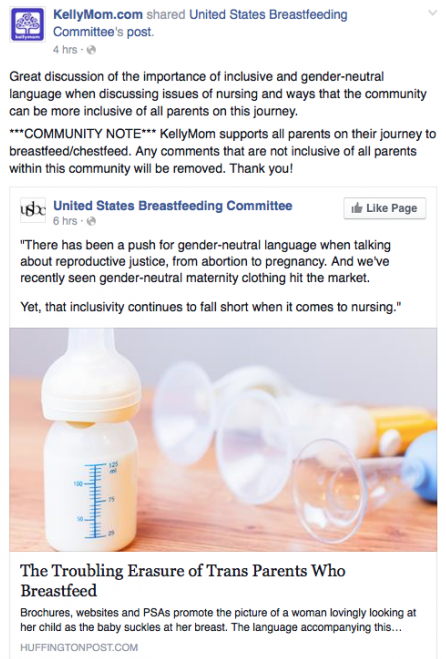 KellyMom’s silencing of comments on the post is especially rich given they’ve shared an article about the supposed silencing of one community.

So, what might a reader/Facebook fan of the KellyMom Facebook page be commenting about, anyways? Here are a few quotes from the article posted, originally on Huffington Post:

Despite acknowledgment by many in birthing communities that pregnancy is not limited to women, the language used by most people still hasn’t changed. Jasper Moon, a genderqueer parent who prefers to be called “ren” by their child (short for “parent”), notes that when they hear the term “nursing mother,” they know “that obviously doesn’t apply to me.”

In 2011, the American Congress of Obstetricians and Gynecologists issued a statement urging Ob/Gyns to be prepared to treat transgender patients.

Yet transphobia in birthing communities persists. Take, for instance, Women-Centered Midwifery, a group of gender-critical midwifes that recently issued an open letter to the Midwives Alliance of North America (MANA). The group expressed concern over the gender-neutral language being used by MANA, and expressed the antiquated belief that gender is tied to biology.

Despite acknowledgment by many in birthing communities that pregnancy is not limited to women, the language used by most people still hasn’t changed. Jasper Moon, a genderqueer parent who prefers to be called “ren” by their child (short for “parent”), notes that when they hear the term “nursing mother,” they know “that obviously doesn’t apply to me.”

You won’t find any of those comments on the post because they are being deleted, quickly and thoroughly.

A sort of “P.C. cleansing” of the page. I know because it took my comment exactly 12 minutes to be deleted. Lest you think I took off on some “woman-centric, cis-gendered breastfeeding rant,” here is what I wrote (and screen-grabbed):

“I guess you don’t support those of us who have a different viewpoint — Your readers can’t disagree with this highly controversial article? Wow”

In the eleven minutes that my comment was up on the page, it garnered 4 likes before it was unceremoniously trash-canned. So this is what it feels like to be shunned, from a breastfeeding community no less, for deviating from the new normal.

Some KellyMom fans agree with the website’s cleansing of dissent. Jess Lavelle commented:

Thank you for removing the comments that are not inclusive. Breast/chestfeeding is hard, and I’ll hold the hand of anybody who takes the journey with me: man or woman.

It appears there’s actually only one thing KellyMom.com is inclusive of: agreement.

Just who is the excluded community these days?

“The group expressed concern over the gender-neutral language being used by MANA, and expressed the antiquated belief that gender is tied to biology.”

Who is it that ‘hates science’?

Rags, we are way beyond madness. We are officially in the “dogs and cats, living together” stage. I’m afraid we are headed for a huge purging of the gene pool. Hope you are far away from urban centers, and may we meet on the other side.

I share your fears, but hope for a less drastic “adjustment”. I am a cock-eyed optimist, as I recognize. I DO live outside an urban center, but how far is far enough?

I’m on the back side of sixty, and have done all I can, gene pool-wise with eight children, and everyone I can influence intellectually, though that is a continuing project.

One of many things I recognize is that all this weirdness is a perverse “compliment” to the supreme triumph of the Enlightenment. It could never exist were it not for the ease of living it has afforded us.

How we have squandered that glorious heritage is a tragedy!

“antiquated belief” – it’s as if they set out to parody themselves, but don’t realize it.

Thomas M. Disch wrote a satirical story in the 70’s about male breastfeeding.

On the other hand, with the emergence of crossover women, and artificial uteri on the horizon, perhaps they will stop exploiting normal men as sperm depositors and women as womb banks in order to normalize transgender homosexual and crossover orientations.

Breastfeeding evolved as a means to feed newborns, not agendas.

The appropriation of normal breastfeeding to pacify the guilty superegos of the abnormal is the reason dissent is not allowed. Narcissism demands to be nursed.

Didn’t breastfeeding originate with the first mammals? It didn’t really evolve so much as appear – breasts producing milk isn’t some adaptation, they either do or don’t and if they don’t, mammal babies die. It is in fact the very definition of mammal.

And aren’t all breastfeeding animals female? Odd how the entire animal kingdom made the same gender choice, isn’t it?

Who ya gonna blame when the kid starves to death?

If he gets the kid to lick his other parts, that’s still child abuse, right?

“Three weeks ago the Huffington Post published an article detailing the distress of transgendered parents who breastfeed, ‘The Troubling Erasure of Trans Parents Who Breastfeed.’ ”

All I can say is, after reading the comments to the HuffPo article, there just may be hope for humanity. Who knew that commenters would overwhelmingly agree that this “distress” is something the trans community needs to deal with on the own, and quit trying to convince the rest of the world to change to fit their needs? In short, the commenters’ advice is, quit whining and solve your problems the way breast-feeding women did…find other like-minded individuals and do something about it yourselves. Refreshing!

And they ask me why I drink.

These people are starting to make Dennis Rodman look normal.

In this “brave new world” gay and transgender issues are always the tail that wags the dog. All of society must be reconfigured around their desires.