Staff salary cuts are usually not a good sign 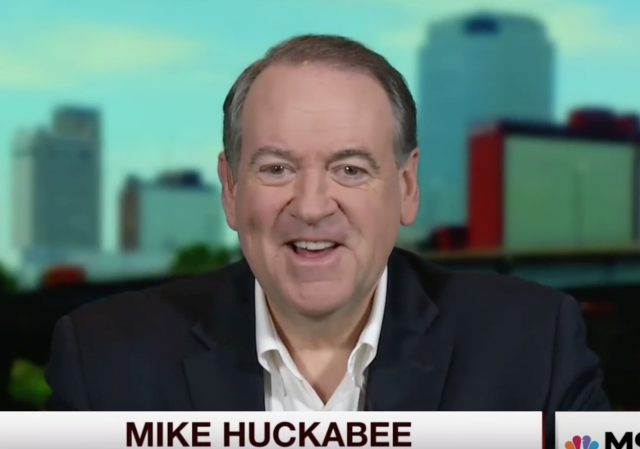 Staff salary cuts, negligible fundraising, and crummy polling are usually good indicators a campaign is on its last leg.

Former Arkansas Gov. Mike Huckabee’s presidential campaign, struggling with its low standing in the polls and underwhelming fundraising, slashed the salaries of senior staffers amid the departure of its top communications aide.

The salary reductions took place over the past few weeks, according to multiple Republican sources familiar with the Huckabee campaign’s operations. The reductions were limited to senior staff, according to Sarah Huckabee Sanders, the candidate’s daughter and campaign manager.

The abrupt departure of Alice Stewart, Huckabee’s communications director, was partly due to disagreements within the communications shop about the direction of the campaign and partly because of the salary cuts, several Republicans inside and outside the campaign said.

“The campaign is being run by the family and it’s going nowhere. It’s a dead campaign,” said Republican strategist Ed Rollins, who ran Michele Bachmann’s presidential campaign in 2012, was the campaign chairman for Huckabee’s 2008 bid, and who also talked to the former Arkansas governor about running in 2012. “And my sense is Alice is at a place in her life where she doesn’t want to work for the fees that she got eight years ago.”

Publicly, Huckabee chalked up Stewart’s departure to campaign fatigue, with the governor saying on CNN that she was simply “exhausted.” But Stewart, a marathon runner, shot back in response to questions from POLITICO that she is “far from exhausted.”

So drama. In any case, Huckabee’s campaign is putting all their eggs in the Iowa basket. If he doesn’t go home with the Iowa trophy, that will likely be the end of the road for yet another Huckabee White House bid.

Huckabee Sanders told POLITICO that the salary cuts would help facilitate the campaign’s redirection of resources toward Iowa, where the former Arkansas governor is hoping to replicate his 2008 victory.

As of Thursday, the campaign has 13 full-time paid staffers in Iowa. It will add at least five in another week or so and tack on a few more in the new year. “Right now our goal is we’re going to put a lot of our resources into Iowa, and that’s what we’re doing,” Huckabee Sanders said.

“Obviously, if we go to Iowa and lose — well frankly we probably won’t keep going,” Huckabee Sanders said. “If we end up at 2 percent in Iowa then, no, because nobody’s getting paid. But if we go and pull out a win in Iowa then I would assume probably it’s increase salaries.”

It’s hard to ignore the difficulty Huckabee has had in generating the level of interest he enjoyed in 2008, when he not only won Iowa but also ended up with 240 delegates in the Republican primary. This time, he’s lagged far behind most of the field in both fundraising — having raised only about $1.2 million in the most recently reported quarter, with roughly $760,000 cash on hand — and in polling, garnering just 2 percent support nationally and about the same in Iowa. Since October, he’s failed to qualify for the primetime GOP debates.

Gov. Huckabee started off just under 9% in the polls but has struggled to move the needle over 2% recently.

Hucksterbeeeeee was on my “Don’t, won’t, never, ever vote-for” list.

The huckster just needs a miracle. Like having money pour down from heaven. Maybe a meteor made of gold will fall from the sky into his mansions grounds.

Time for Huck, Gramnesty, Pataki, Kasich, Santorum, Rand, and Fiorina to drop out – and Gilmore, too (yes, this invisible is STILL on the list). IMHO, Bush, Christie, and Carson should, as well……they’re not going to catch the front-runners.

I predict Rubio will fall fast, after today’s AWOL stunt and his massive FAIL this week that has brought the spotlight on his abysmal record on amnesty…..

I agree with you in theory, that those on 3% and under should probably think about getting out, but that’s their decision to make. I’m not sure I like the idea of kicking out everyone but DINORightMarie’s top two picks before a single citizen has even had a chance to vote.

Huck keeps thinking he can reproduce the 2008 come-from-nowhere Iowa win, just as Santorum thinks the same of 2012. Both were fueled by evangelicals, but they’ve moved on. Iowa evangelicals are determined to be disappointed by someone new this year.

Huck lost any residual goodwill by carrying on his losing 2008 effort to the bitter end, hurting the party for the general election. Good riddance.

Oh, was he running again this year? Who knew.
I saw too much of him 4, very long, years ago. I still change the channel when he happens to come on screen.
I agree with DINO, time for a lot of the candidates to go.

More like ‘flushed out the sewage treatment plant ages ago’.

I literally didn’t even know he was a candidate.

At this point anybody not named Trump, Cruz or Rubio has almost zero chance of getting the nomination.

Everybody else is too arrogant to quit (Jeb), basically campaigning for VP (Carson, Fiorina), or too stupid to realize they are never going to be the Republican nominee because they have pissed off too many actual conservatives by being RINOs (Kasich, Christie).

Rand Paul is kind of off on his own doing Rand Paul things, but nothing surprising there.

If he doesn’t go home with the Iowa trophy, that will likely be the end of the road for yet another Huckabee White House bid.

There is zero chance of Huckabee going home with the “Iowa Trophy.” We can stick a fork in that bit of political theater right now.

As I said a few weeks ago, Pataki, Graham and Santorum need to withdraw, and Paul and Huckabee need to be handed their hat and shown the door, with the express statement that if they can’t break 3% they don’t deserve to be in the race. In the interim, Kasich has dropped to 2% and Paul has raised to 3%, so I’ll say that Paul might have promise, but Kasich needs to consider his position.

The next undercard should be JEB!, Christie, Fiorina and Paul, and the main stage should be Trump, Cruz, Carson and Rubio. If a clear leader does not come out of the undercard, that will be telling, and it will allow for the main candidates to actually have ~debate~ time.

As a life long Arkansan and Republican I feel that I should say something good about Huckabee.

“Mike Huckabee will never in a million years be President…..Good!”

Let’s call the Huckster’s campaign for what it’s truly been…a chance for an all expenses paid tour around parts of the country to go hunting and eat lots of dinners at fairs and church socials.

Huck has said that if he does not finish in the top three in Iowa, he is done.

HH: So you have to get one of the three tickets out of Iowa, though, Governor. Did I hear you say that clearly?

MH: We, absolutely. Absolutely, no doubt about that, because if we don’t, then it’s hard for us to see a way forward.