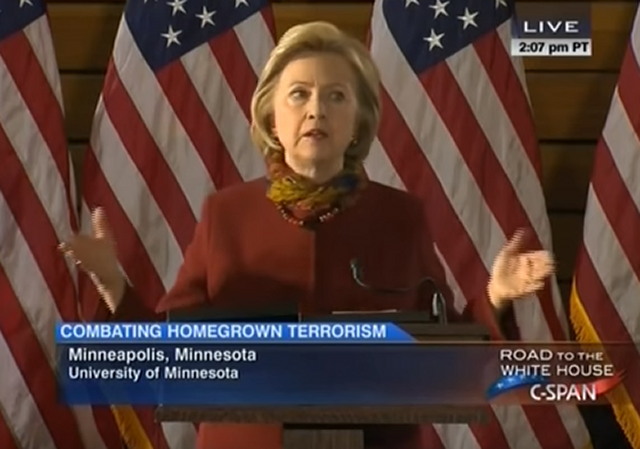 It’s funny to watch Hillary Clinton attack empty slogans when her party is built on them. In a campaign stop in Minnesota, she thought she was going after Republicans but as Daniel Bassali of the Washington Free Beacon notes, some people heard it differently:

Meant to be a subtle jab at her Republican rivals, Hillary Clinton inadvertently took a dig at President Barack Obama’s current strategy in fighting the Islamic State during her national security speech in Minneapolis, Minnesota on Tuesday.

The Democratic frontrunner directly rebuked the concept of containing ISIS, something Obama claimed to have accomplished just hours before the coordinated terrorist attacks that killed 130 people in Paris.

“It is not enough to contain ISIS. We must defeat ISIS, break its momentum, and then its back,” Clinton said.

Claiming to know the desires of the terrorists she refused to call “radical Islamic extremists,” Clinton said the U.S. should not engage ground troops in the region. The former secretary of state, following Obama’s example, has already drawn a red line on not putting boots on the ground in Syria to fight ISIS even if they successfully carried out a terrorist attack on the U.S. homeland. A majority of Americans now support sending ground troops to put an end to the Islamic extremists.

“We can’t afford another ground war in the Middle East; that’s exactly what ISIS wants from us,” Clinton said.

With Hillary Clinton, it’s all about the slogan of the day:

Here are some more reactions on Twitter via Twitchy:

@HillaryClinton If it wasn’t for shallow slogans you’d have nothing to say.

“Shallow slogans don’t add up to a strategy” Hillary Clinton just summed up why you shouldn’t vote for her. https://t.co/4i04ScaFKZ

The whole mess – Libya, Egypt, Syria, Iraq desertion, Iran deal – happened or began under her. Also set the stage for Ukraine & Crimea, and the Chinese moves in South China Sea.

Worst Secretary of State ever. Warren Christopher was better, and he slept most of the time.

As long as we don’t do something idiotic like nominate Trump, it is ours to lose.

“Clinton to call for ‘360-degree strategy’ against ISIL”

It means we are the problem…….so, let’s navel-gaze, examine ourselves, and fix ourselves…..then they will like us!

So, yes. Yes, it does mean exactly what you said. 🙂

If ONLY she had some talent in a constructive area ANYTHING like her vast talent for corruption and lying, then at least the Collective could make a case for her candidacy.

She simply doesn’t. She’s a vessel of filth, with no redeeming value that I’ve ever seen.

“Change we can believe in.”

“ISIL is a JV team.” (…which should be ISIS – the L for Levant eliminates Israel….)

“I got Osama bin Laden.”

Nearly one whole decade of NOTHING but empty slogans…..and she was at the center of it all.

How can ANYBODY support this nightmare-woman, or consider her or her party capable of leading ANYTHING?!?!