Cheers to you, 21st amendment. Long may you reign. 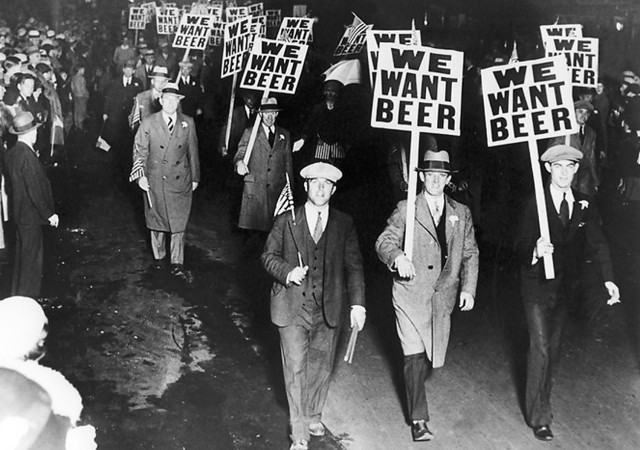 This day in 1933, America had the good sense to decriminalize booze. The 21st amendment to the Constitution was ratified, nullifying the 18th amendment.

Three weeks after his inauguration, President Franklin D. Roosevelt signed the Cullen-Harrison Act, legalizing the sale of beer and wine with the alcohol content of 3.2%. The “3.2% Beer Act,” as it was known, went into effect April 7 (which is now celebrated as National Beer Day) and was the beginning of the end of Prohibition.

The legal reintroduction of alcohol received a hero’s welcome:

At 12:01 a.m. on April 7, 1933, sirens, fire alarms and train whistles shrieked. In Chicago, harried bartenders scrambled to serve crowds that stood 12 deep. At Pabst Brewing Co. in Milwaukee, thousands of onlookers cheered as company employees hoisted barrels and crates onto trucks. About 800 people stood in the rain outside the White House, watching as a man hopped out of his vehicle and unloaded two cases of beer. Secret Service agents accepted the goods, a gift for the chief executive from one of the nation’s brewers. “President Roosevelt,” read a sign on the side of the truck, “the first real beer is yours.”

Prohibition was one of the progressive movement’s biggest successes. One that prompted the rise of organized crime and expansion of the IRS (see Bureau of Prohibition), and eventually stock car racing.

Anytime I think U.S. politics couldn’t possible get any wilder, I remember we voluntarily outlawed booze for over a decade. It could always be worse.

Cheers to you, 21st amendment. Long may you reign.

The OTHER really BAD Constitutional notion of the Progressive Era was part and parcel of the Prohibition movement; the income tax.

It was imposed in very large part to replace the tax revenues that Prohibition would kill, and which to that point had financed the Federal government.

In December 1917, after two previous attempts had failed (one in 1913; the other in 1915), Congress approved a resolution to submit a constitutional amendment on nationwide prohibition to the states for ratification.
http://query.nytimes.com/mem/archive-free/pdf?res=F20A17FF355F157A93CBA81789D95F438185F9

ALL of the Progressive Era Amendments were terrible ideas deserving of repeal. We managed to get rid of ONE, and we’re celebrating? Well, okay, since it’s booze . . .

Let’s get rid of XVI, XVII, & XIX while we have some momentum!

Tony Oliva at Bullets First wrote an excellent post on the Progresive Era Amendments in 2013:
http://bulletsfirst.net/2013/12/05/happy-freedom-tyranny-day/

He gave an enlightening summary of the types of amendments that have been added to the Constitution over the centuries since it was ratified. I have never seen the deterioration in Constitutional thinking so clearly revealed as it is in Oliva’s post. Here’s a short extract, but do RTWT:

“We have the first 10 Amendments to the Constitution, the Bill of Rights, and they’re great at limiting the power the Government can use to crush us with. But after 11 through 15 that dealt with reconstruction and abolishing slavery we see the Amendments begin to be used to punish and attack American Citizens or for simple clerical purposes such as when terms begin or when salary increases take place.

“Nearly half of the amendments though form the Bill of Government Rights.

So, when are we going to stop this bogus “war on drugs” so that they can stop giving money to negro gangs and the Mexican cartel? There’s no way one can regulate morality. All it does is lead to a thriving black market.