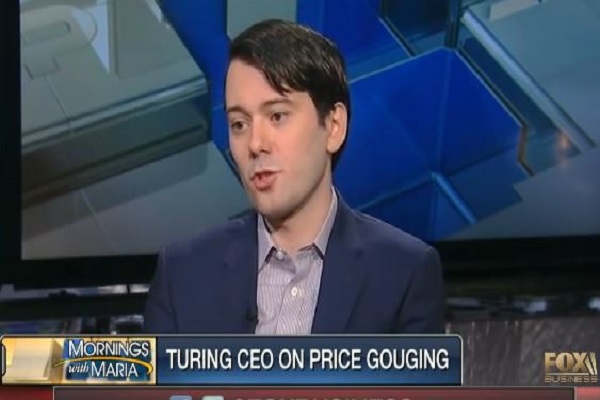 Back in September, the New York Times reported that Turing Pharmaceuticals had increased the price of its HIV drug, Daraprim, from $13.70 per tablet to $750 per tablet.

Specialists in infectious disease are protesting a gigantic overnight increase in the price of a 62-year-old drug that is the standard of care for treating a life-threatening parasitic infection.

The drug, called Daraprim, was acquired in August by Turing Pharmaceuticals, a start-up run by a former hedge fund manager. Turing immediately raised the price to $750 a tablet from $13.50, bringing the annual cost of treatment for some patients to hundreds of thousands of dollars.

Shkreli was arrested today by the FBI for securities fraud.

The pharma boss who became infamous after hiking the price of an HIV-related drug by 5,000 percent was arrested Thursday by the FBI, prosecutors said, accusing him of orchestrating a “trifecta of lies, deceit and greed.”

The arrest of Martin Shkreli — a hedge fund manager-turned-pharmaceutical company CEO — comes amid an investigation related to “widespread fraud” through a hedge fund and drug company he once ran, according to a complaint filed by federal regulators.

Shkreli, 32, who was taken into custody at his midtown Manhattan residence, is currently the boss of Turing Pharmaceuticals and KaloBios Pharmaceuticals.

Shkreli is facing a seven count indictment related to an assortment of fraud allegations and of treating his companies “like a Ponzi scheme.”

Shkreli is named in a seven-count indictment in federal court in Brooklyn, New York, along with Evan Greebel, who was Retrophin’s outside counsel.

At a news conference Thursday afternoon, U.S. Attorney Robert Capers in Brooklyn said Shkreli treated his companies as a “personal piggy bank” and ran them “like a Ponzi scheme.”

Shkreli is being charged for illegally using Retrophin assets to pay off debts after MSMB lost millions of dollars.

The indictment said Shkreli and Greebel, along with others, orchestrated three interrelated fraud schemes from September 2009 through September 2014.

Watch as Shkreli is taken into custody by the FBI:

I could’ve sworn I saw a bag of Skittles fall out of his hoodie pocket when he got head-pushed into the cop car.

Are you trying to say “George Zimmerman where are you when we need you?”

Perp walks are disgusting and ought to be illegal.

Basically this guy is a evil Pr**k.

What a punk. Nowhere near the brilliance of a Bernie Madoff, whose ponzi scheme ran for decades before he was caught.

Anyone know if forfeiture laws apply here? (after due process, of course. /sarc) Scooping up whatever’s left of this jerk’s ill-gotten gains might help out those spendy, spendy folks down in D.C.

Don’t drug patents only last 20 years? If the drug is 62 years old, couldn’t another competing company start producing it?

Drug patents that old only lasted 17 years. Yes, another company can make and sell the stuff, which apparently is straightforward with respect to its manufacture. There is already at least one competitor that has announced its intent to enter the market.

Yes and No. A company would need some factory somewhere to ramp up production. Then they would to have the FDA approve the facilities. That takes time. In the meantime he’s the only game in town, so he rakes in the profit.

Diabetics are familiar with the problems. About ten years ago there was an insulin production problem, and for a long time meter making companies have been using such techniques to keep test strip prices high.

Soapbox warning!
Before Obamacare, it was a lie that the health care in this country was OK. It badly needed fixing. Guys like this are very common but most have the sense to be less visible.

What did Obamacare do to fix it? Nothing!

It isn’t as if compounding pharmacies don’t have risks and disadvantages of their own, though.

Ehh. Better than getting your meds from a greedy pr–k like Shkreli. Who knows what corners HE would cut to make a buck.

Not that there is any risk of HIV in prison says the KarmaBitch. Hehe.

So maybe in other weords his raising the price of that drug wasn’t going to make as much money as he claimed, and he was doing it to try to get himself out of the hole.

G***** **. GET YOUR F*****G FACTS STRAIGHT THIS IS NOT AN HIV DRUG.
Sorry for the abrupt rudeness, but let’s not act like liberals.
This drug is used to treat a used to treat a parasitic infection called toxoplasmosis . You may have heard of this disease. It was the reason Hugh Grant had to get rid of his cat in the movie Nine Months.

It’s not generally dangerous and people live with it, unless you are immuno-compromised. I’m generally guessing but that includes elderly, infants, people lacking a spleen, hepatitis patients, diabetic patients and AIDS ( I think, not HIV ). A medical professional can probably give more details.

I also stopped at the “aids” drug point as it is also used in any patient who gets Toxo. It is the “T” in “TORCH” infections in utero that nail the unborn child’s brain. Cats and pregnant women … a bad combo at times for the fetus.

If the idiot hadn’t gotten stupid and jacked up the price of Daraprim by 4,000%, he probably could have continued playing his games. Instead, he put himself under the microscope and invited the Fed to crawl inside and take a look.

He was already fired from the other job and being sued, so the fraud was going to come out at some point, along with the high probability of criminal charges. This was a desperate attempt to raise a bunch of cash fast, possibly for a getaway.

Pure capitalism. This is *your hero*.

The “invisible hand” of the market would have gotten him. No, not pure capitalism, as another company was readying to spin up production. But we can all relish his situation now… maybe he will need the drug in a few years and oops… not available!

“Pure capitalism” my achin’ back.

This was criminal dishonesty.

Pure capitalism does not support fraud. Ignorant liberals, chem_geek is your poster child.

For REAL fraud…where the money gets into the billions…without consequence, you need BIG GOVERNMENT.

I am sure there is a ton more to both the original drug price story, as well as his securities fraud problem.

Its Obama’s FBI, so don’t think for a minute this arrest isn’t part of some wider political effort to discredit the pharma idustry, to the benefit of the single-payer crowd. It will all make itself clear before the end of Obama’s reign.

Believe it or not, sometimes the FBI does arrest actual white-collar criminals, even under Obama. While I don’t doubt the left will try to tar the industry unfairly, they were already. And this fellow is hardly the poster boy for business ethics in any field.

He never would have been targeted if he hadn’t embarrassed Obama. It reminds me a little of the jihad against Gibson Guitar.

Is that poor schlub who made the YouTube video nobody watched but which apparently caused Benghazi still in jail?

Don’t come to the attention of the authorities, people. Don’t embarrass the powers that be. Even if the thing you did which originally brought you to their attention was perfectly legal, they’ll still find some way to punish you. In a ham sandwich nation where you can commit three felonies a day without even realizing it, the lesson is, “just keep your head down and try not to be noticed, kulak.”

The commenters here who are cheering for this man to be taken into State custody, anally raped, and infected with AIDS, all for the sin of having legally charged “too much” for some obscure Crazy Cat Lady drug, have no idea what they’re cheering for.

“The commenters here who are cheering for this man to be taken into State custody, anally raped, and infected with AIDS, all for the sin of having legally charged “too much” for some obscure Crazy Cat Lady drug, have no idea what they’re cheering for.”

I’m pretty sure they think they are cheering for Shkreli to be taken into State custody, anally raped, and infected with AIDS. But I could be mistaken.

Only in this wonderful Age of Obama.
Stalin era KGB head Lavrenti Beria “Show me the man and I’ll find you the crime.”
Anyone remember Nakoula Bosseley Nakoula? Or D’Nesh D’Souza?
Brian Harrison, Bill Stover, Karen Alter, Corby Whitaker, and John Gaffney, of Solyndra fame are still as free as birds, though.
Perhaps that multi square mile NSA data storage facility in the Utah badlands isn’t chock full of data on foreign folk who want to harm the USA, but instead chock full of info on folks who live in the USA to be used if they get out of line or insult the “I Won’s” sensitivities
Goes a long way toward explaining how John Roberts was able to find a tax in Obamacare when it was specifically labeled a penalty, or find that the clause “As established by the states” actually meant “Or what the Federal Government wishes”