It’s all about protecting Hillary. 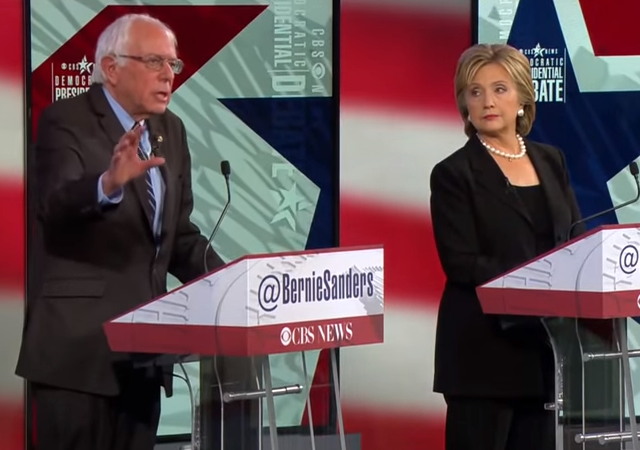 The last Democratic primary debate was on a Saturday night and the next one is this Saturday night. The one after that will be on a Sunday night. What’s going on here is so clear that even liberal journalists have to admit it.

What a shamefully imbalanced primary season this has been. For all their flaws and fakery, the Republican candidates have squared off frequently, at convenient hours and despite the menacing nimbus of Donald Trump’s hair; the Democratic candidates have, in contrast, hidden in a closet.

Tuesday night’s meeting of Republicans, who sparred in Las Vegas over how to keep America safe, was the fifth. The meeting of Democratic presidential candidates in a few days will be only the third.

And who’s going to watch it? It’s on a Saturday night, when a political debate ranks somewhere between dialysis and a Milli Vanilli tribute concert as a desirable way to unwind.

The last meeting of the Democratic candidates was also on a Saturday night, and fewer than nine million viewers tuned in, down from 15.3 million for the sole Democratic debate so far on a weeknight. All of the Republican debates have been on weeknights; the first two attracted more than 23 million viewers each.

In fact none of the first four Republican debates had an audience of less than 13.5 million. The fifth debate had an estimated audience of 18 million.

This strategy of holding a limited number of debates on weekend nights is a clear effort on the part of the Democratic Party to protect Hillary Clinton but it could backfire on her in the general election.

Issues which could and should be dealt with during the primary could continue to dog Clinton in the general election when many members of the public hear about them for the first time.

If you’re one of the political junkies who will be watching this Saturday, Noah Weiland of Politico offers some background on what to watch for:

Everything you need to know about the next Democratic debate

What’s Hillary Clinton’s challenge in this debate?
Clinton is more vulnerable to forces outside her own party than those inside right now. At a town hall meeting in New Hampshire this week, she lashed out at what she sees as Donald Trump’s vandalism of conservative and American politics. That doesn’t mean Sanders and O’Malley haven’t been criticizing what they see as Clinton’s policy weaknesses. O’Malley recently called Clinton’s immigration politics “worn out,” and Sanders had to retract negative ads from his campaign website that portrayed Clinton as a Wall Street shill.

Can Bernie Sanders make a dent in Clinton’s massive lead?
Recent polling suggests that Sanders’ candidacy should still be taken seriously; In a December Des Moines Register poll, Clinton is only 9 points ahead of him, and the strong New Hampshire polling puts him in a nice position with the audience on Saturday. National polling still spells doom for the Vermont senator, alas: only a few December polls have Sanders within even 20 points of Clinton.

What about Martin O’Malley?
While trying to distinguish himself recently as the candidate most supportive of refugees and dismissive of his rivals, O’Malley is barely registering in the polling. Only 7 percent of Maryland Democrats—O’Malley’s home state and the one he served as governor—are supporting his bid for president. His uphill climb is steep.

The debate will air at 8 PM ET on ABC.

Even in the general election race, no one will dare ask Hillary a difficult question:
1 – If you are elected President, in eight years will the national debt be closer to twice as much as now, three times, or half?
2 – Do you have any consideration for Americans who have not donated to the Clinton Foundation or directly to your campaign or to a PAC?
3 – If I am a successful businessman how much do you recommend I donate to you in order to get your attention.

Well that is good because I don’t want to watch them debate either.

I still maintain there won’t be any presidential debates next fall. Hillary’s campaign will sabotage the debate negotiations by making demands that the Republican nominee won’t (and shouldn’t) agree to.

Then her campaign, the entire Democrat party, and the media will say the Republican nominee is the one who is afraid to debate.

I should put money down on this prediction – it would take care of my retirement fund!

I would hope any Presidential debate would be about whether hitlery gets 20 years or life imprisonment over the emails.