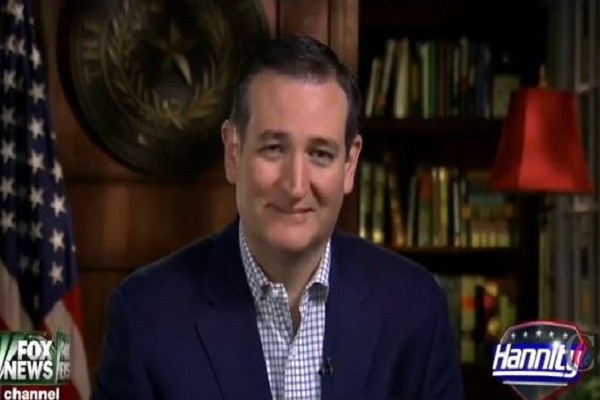 Whether it’s an Overton Window effect, an example of Boyd’s “OODA Loop,” or something else, Ted Cruz is enjoying a surge in both state and national polls.

According to the latest Quinnipiac poll, Cruz is now only four points behind the current Republican front-runner, Donald Trump.

Trump wins 28% support in a Quinnipiac poll released Tuesday, with Cruz nipping at his heels with 24%. Following that pair is Marco Rubio with 12% support, Ben Carson with 10%, Chris Christie with 6% and Jeb Bush with 4%. The survey was in the field entirely after CNN’s debate in Las Vegas on Dec. 15.

Cruz has been steadily climbing and overtaking Trump in Iowa, and there is some evidence that the Texas senator is managing to perform similarly nationally.

The Reuters Rolling poll has Trump strongly in front:

Quinnipiac’s national polling has consistently shown lower support for Donald Trump than other national phone polls, and that seems to be the case again in Tuesday’s survey. Their last pre-debate poll showed Trump at 27%, Rubio at 17% and Carson and Cruz both at 16%.

Trump also does not fair well in a head-to-head matchup against Hillary Clinton:  “And in hypothetical head-to-head matchups, Trump continues to fare poorly, with Clinton beating him by 7 points and Sanders doing so by 13 points. Other Republicans apparently pose greater threats to the GOP: Cruz and Clinton tie at 44% each, and Clinton only beats Rubio 44% to 43%.”

However, it’s not easy to dismiss the Quinnipiac poll as an outlier just yet.  Not only is Cruz leading Trump in Iowa, but he’s making steady gains in New Hampshire, South Carolina, and Florida.

Marc Caputo reports on the Associated Industries of Florida polls:

For the first time, Cruz ties Trump in South Carolina, and he’s also tied for second with Rubio in the Florida senator’s home state, according to a memo on the three surveys, which were conducted after last week’s debate.

Another supposed “surge”? How many people show at an average Cruz rally?

The Emerson College poll taken at the same confirms the Reuters poll and all of the other polls just released except the Q Poll. What a surprise since the the guy who runs that poll is a virulent Trump hater. Cruz is not within 4 points of Trump. That is a ridiculous assertion.

The CNN poll – which was released this morning – shows Trump 39% Cruz 18% which agrees with every other recent poll except the Q Poll.

The CNN poll also confirms that Trump leads all comers by 20% to 40% in economy, jobs, terrorism, ISIS.

They are all within the margin of error. So all tied. But the bad news for Hillary is that she never breaks 50% against anybody. Hillary’s numbers have no where to go but down against Trump. Nobody does it like Trump when it comes to drowning an opponents numbers.

Rubio has taken a bunch of hits recently, from the Immigration issue with Cruz at the debate to voting “not present” on the Omnibus.

That leaves Cruz as the clear not-Trump. That’s a good position to be in going into the primaries.

Expect the anti-Cruz attacks to get increasingly desperate over the next two months.

With so many even on the right constantly slamming Trump, it is surprising he is within 7 of Hillary. I’d think that would change after the primary. Hillary might win some white collar RINO votes, but Trump has potential to win some union votes with the America First theme, and some black votes on border control and jobs.

It will be an unusual race if Trump wins the nomination, with haters on both sides but some strong blue collar love from both sides, maybe even his normally non-voting celebrity fan base turning out. If it is Cruz, RINO support might be tepid. For now only that Q poll has Cruz closing the gap.

I believe trump or cruz will trounce hellary. If either of them as the nominee picks carson as VP, it’s over. Hellary, like all D’s, depends upon a near monolithic black vote and turnout. 75-80% will not do it. They need the 90%. Carson will pull that away…

IMHO Trump’s national polling reflects conservative and GOP base backlash against the GOPe and won’t necessarily translate into votes for Trump in state primaries. Trump’s biggest contribution to this race has been to move issues such as combatting illegal immigration and Islamic terrorism into the Overton Window.

The only real polls that matter are STATE polls as that is how the electoral votes will be counted. Yet even here we need to watch the composition of the polls – registered voters or adults.

Fivethirtyeight has a good article for rules to understand polls.