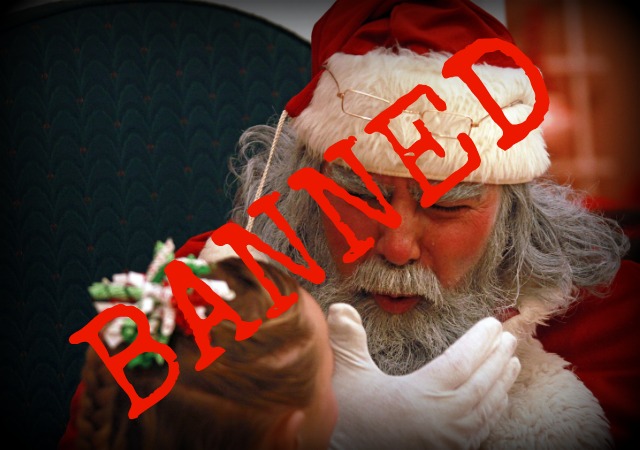 Upon the order of Sultan Hassanal Bolkiah, one of the world’s richest men, Christmas in the small country of Brunei has been publicly banned.

Wearing a Santa hat in public could result in a five-year prison sentence. While Brunei’s Christians are still allowed to celebrate Christmas (so generous of the Sultan), those festivities are not to be disclosed to Muslim citizens for fear it might “damage their faith.”

The Sydney Morning Herald has the story:

Oil-rich Brunei has banned public celebrations of Christmas, including sending festive greetings and the wearing of Santa Claus hats.
Muslims seen celebrating Christmas and non-Muslims found to be organising celebrations could face up to five years jail.

However the country’s non-Muslims, who comprise 32 per cent of the 420,000 population, can celebrate Christmas in their own communities on the condition that the celebrations are not disclosed to Muslims.

Imams have told followers in the tiny Borneo nation to follow a government edict last year banning celebrations that could lead Muslims astray and damage their faith, according to the Borneo Bulletin.

“These enforcement measures are … intended to control the act of celebrating Christmas excessively and openly, which could damage the aqidah (beliefs) of the Muslim community,” the Ministry of Religious Affairs said in a statement explaining the edict that was published in the Brunei Times.

The statement said non-Muslims disclosing or displaying Christmas celebrations violated the penal code which prohibits propagating religion other than Islam to a Muslim.

The Borneo Bulletin quotes imams saying in a Friday sermon that lighting candles, putting up Christmas trees, singing religious songs, sending Christmas greetings and putting up decorations are against the religious faith.

“Some may think that it is a frivolous matter and should not be brought up as an issue,” the imams are quoted as saying.

“But as Muslims … we must keep it (following other religions’ celebrations) away as it could affect our Islamic faith,” they said.

Before Christmas last year officials of the Ministry of Religious Affairs visited businesses and asked owners to remove Christmas decorations and to stop staff wearing Santa Claus hats and clothes.

The Sultan attempted to implement sweeping sharia law reforms via edict last year. After public outcry, “their introduction appears to have been delayed without public explanation, according to foreign observers in Brunei,” reported the Sydney Morning Herald.

Muslims are so ‘confident’ in their faith that they have to threaten their fellow ‘believers’ with execution for fear they will leave the faith. Now it seems that the mere mention of Santa Claus (much less the dreaded JC)is enough to damage their fragile faith.

Well, I suppose that is all to the good. The more people that leave Islam, the better. I have asked several liberals which would be better: if all Muslims became Christians or all Christians became Muslims. They won’t answer. They mumble about all religions being basically the same or that we must ‘respect’ them all. Well, I challenge them (shameless plug time here) to check out my church group’s website pages on Islam ( http://www.unshackledaction.com/#!islam/c1cqx ) with particular emphasis on the page about Sharia Law ( http://www.unshackledaction.com/#!sharia/c5bw ). Then they should explain why we should ‘respect’ Islam.

The problem for Muslims is that Islam is marred through marriage to a left-wing or totalitarian ideology. Reasonable and rational are alienated by these quasi-religious (i.e. behavioral protocols) diversity classes.

Imagine if someplace like Israel banned the observance of Ramadan. We would be listening to the media and the corrupt UN go on for months, maybe even YEARS, about how bigoted and evil they were, there would be endless sanctions and speeches demonizing them, and dozens of countries would boycott or threaten to boycott them.

But hey. Throwing people in jail for wearing a Santa hat is 100% ok, as long as you’re part of the ‘religion of peace’, right liberals?

I’m sure that Brunei is a member in good standing with the UN. I’m sure that somehow, the American Taxpayer is subsidizing this country and it’s Sultan in some manner. No doubt Obama would bow to him if they met.