“Let us stand together and do our duty and we shall not fail.” 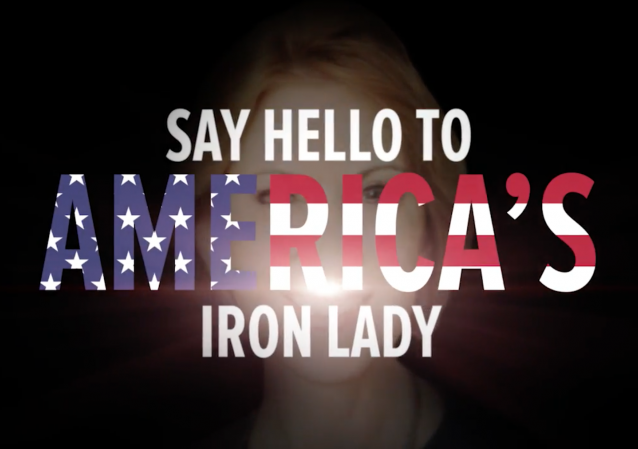 The ad makes a bold comparison — it pitches Fiorina as America’s Margaret Thatcher.

Margaret Thatcher: “Let us stand together and do our duty and we shall not fail.”

Carly Fiorina: “Our government has become incompetent, unresponsive, corrupt, and that incompetence, ineptitude, lack of accountability is now dangerous. Talking tough is not the same as being strong. And to wage war we need a commander in chief who has made tough calls in tough times and stood up to be held accountable over and over.”

Carly Fiorina: “Margaret Thatcher once said that she was ‘not content to manage the decline of a great nation.’ Neither am I. And we need to beat Hillary Clinton to take our country back and keep our nation safe. And together if you join me, we will take our country back.”

“Our great nation needs a strong leader with a broad and deep command of issues to take our country back,” said Katie Hughes, Communications Director for CARLY for America. “Carly Fiorina is unafraid and has a plan to destroy ISIS and win the war on terror at home and abroad. She is unafraid to stand up and fight the special interests running Washington who are failing American workers and families through high taxes, out-of-control spending and regulations by providing real solutions through her conservative pro-growth economic blueprint. She is unafraid to stand up to the taxpayer-funded abortion industry and defend the unborn against the human rights abuses being perpetuated by Planned Parenthood currently engaged in the harvesting and trafficking of aborted baby body parts. Carly Fiorina is the right leader for our country.”

Fiorina who was once polling in the double digits is now just under 3% nationally.

It matters greatly who the GOP nominates for the presidency in 2016. Somehow I doubt that Carly should be that person. Yet, it must be a person who will demand that Congress pass conservative legislation and stop this insanity of Republicans facilitating Obama’s, also Reid’s and Pelosi’s, wet dreams.

This omnibus budget is a disaster for US and just might have wrecked GOP plans of retaking the WH!

Unless Republicans throw out Ryan and McConnell from their leadership positions, the country is screwed, and perhaps even regardless then.

We need to get the spirit of 2010 and 2014 raging and ready to vote out any RINO running for office, to heck with all of them. And, to vote against JEB, Kasich, Rubio, Christie, Graham, and any of the others trying to run for presidency in 2016.

Slight clarification: “any of the other” RINOs “trying to run for presidency in 2016.”

Trouble for Carly is she’s no Margaret Thatcher but an RNC establishment RINO.

Would you like to provide some evidence for that statement, or should we just take you at your word?

Prior to running for President she worked for all the RINOs that run the GOP establishment. She has political connections with the Bushes going back at least 10 to 12 years. Her policies, including her insane no fly zone world war 3 with Russia policy are all the same as JEB!. So yes take my word for it.

Agree! In fact, I find it galling and presumptuous for her or one of her PACs to put forth such a comparison.

It’s beyond my how more people don’t like this woman. She would make an excellent president.

I can’t speak for anyone else but I can tell you why I don’t like her.

1. She made the mistake of attacking and continuing to attach Trump.

2. Whenever she opens her mouth she sounds like a middle school principal giving a lecture to an assembly of 5th graders.

3. She worked for the RNC and is connected with the Bushes politically.

4. Her policies are no different than any of the other candidates I oppose, Jeb!, Rubio, Kasich, et al.

5. She was not an effective executive and leader, and was fired very publicly from HP.

6. No other fortune 500 company offered her a CEO/COO job after being fired from HP.

Margaret Thacher may not have been willing to manage the decline of a great nation, but Carly Fiorina has managed the decline of two great corporations.

The GOPe already tried to run her up the flagpole and she immediately died in the polls.

Margaret Thatcher?? Margaret Thatcher? What? Huh? This is like comparing Minnie Mouse to Jeanne d’Arc. Fiorina may be entertaining to watch but who needs another Amnesty shill nibbling at America’s cheese?

Not a chance in hell is Carly going to be nominated.

This reminds me of Clemenceau’s comment about Woodrow Wilson during the treaty negotiations after the Great War: he’d never known a man to talk so much like Jesus Christ but act so much like Lloyd George.