Brace Yourselves: Winter is Coming! 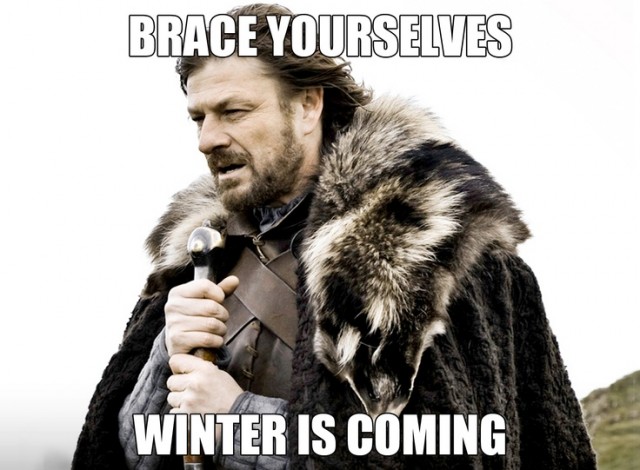 Winter officially began Monday, and the chilly season kicked off with more great science from our current administration.

New data from NASA reveals that fossil fuel burning, the bane of climate change activists across the globe, is now responsible for plummeting temperatures.

Major theories about what causes temperatures to rise have been thrown into doubt after NASA found the Earth has cooled in areas of heavy industrialisation where more trees have been lost and more fossil fuel burning takes place.

Environmentalists have long argued the burning of fossil fuels in power stations and for other uses is responsible for global warming and predicted temperature increases because of the high levels of carbon dioxide produced – which causes the global greenhouse effect.

While the findings did not dispute the effects of carbon dioxide on global warming, they found aerosols – also given off by burning fossil fuels – actually cool the local environment, at least temporarily.

The research was carried out to see if current climate change models for calculating future temperatures were taking into account all factors and were accurate.

Of course, there was no mention of the earth’s tilt or solar activity in relationship to dropping temperatures. But studying something obvious doesn’t get the funding or have the glamour!

I will also counter that after burning tons of fossil fuels so that world leaders and climate change believers could fly into Paris and sign a climate accord, Europe is having the warmest December in 9 years. If they now complain about “global warming”, they have only themselves to blame.

Regulators in California have long used global warming to tax, fine, and otherwise control commerce in the Golden State. Our “mega-drought” gave the bureaucrats an excuse to spend money on all sorts of projects, including a #droughtshaming website.

Drought Shaming Is A Thing, And Celebrities Are The Main Targets http://t.co/uHK5v46Gck pic.twitter.com/KT2lJTooew

Great! Now we get to spy on each other under the banner of eco-activism.

Perhaps because of fossil fuel burning, significant winter storms are hitting Northern California and creating a much needed snow pack.

Winter storm warnings were posted Monday in the Sierra Nevada after the National Weather Service predicted heavy mountain snow during the holiday week.

….Forecasters said the system could dump as much as 3 feet of snow on the highest peaks through Tuesday night, with accumulation totals expected to be around a foot at Lake Tahoe.

“This major winter storm will continue to affect the region through Tuesday morning with heavy Sierra snow, moderate to heavy rain and strong winds,” the National Weather Service said.

Now, regulators are also looking to ease drought restrictions in the state. Complaints are that the climate bureaucrats forgot to account for climate realities when the established the mandated water reduction levels:

Hot, inland regions such as Sacramento wouldn’t have to conserve quite as much water in 2016 under proposed regulations released Monday by California drought regulators.

The proposal by the State Water Resources Control Board would also mean less onerous conservation mandates for California’s fastest-growing communities, as well as those that have created new “drought-resilient” water supplies for themselves through recycling, desalination or other means.

…Regulators listened to the complaints. Under the new system, which would run through October, agencies in the hottest climates would see their current mandates fall by as much as 4 percentage points.

Less regulation in California! That is, truly, a Christmas miracle.

TRANSLATION: The climate is getting hotter, colder, or staying the same, so government needs more control over energy, and thereby the economy, to save us from . . . whatever.

One more good reason for a bbq on the 4th of July. Did they mention how a cold 30 pack of Lone Star also cools the environment?

I fired up my pit the other day to celebrate the beginning of winter. Smoked a 12 pound brisket and divvied it up among family and friends.

“The research was carried out to see if current climate change models for calculating future temperatures were taking into account all factors and were accurate.”

Of course they aren’t fucking accurate. If they were accurate they would be useful.

There is literally NOT A SINGLE MODEL that can even accurately calculate previous temperatures when fed into it, never mind future temperatures.

The hubris of these idiots and their reductionist “science” is really mind boggling. To think they can reduce a system as vast and complex as our global climate to a “CO2 knob” is really laugh-out-loud-stupid.

Hard to beat when one state can control so much by it’s edicts.
http://www.slashgear.com/california-demands-electric-cars-from-more-manufacturers-09227461/

California has gained a reputation as one of the scripted governmental bodies in the world when it comes to the environment, and like it or not, there’s no denying that its legislation drives green technology. At the moment the top six automakers in the state – Ford, GM, Chrysler, Toyota, Honda and Nissan – are required to sell a certain number of all-electric or fuel-cell cars every year. California has updated its mandate so that by 2018, any automaker that sells 20,000 vehicles or more in the state will also be held accountable.

At today’s sales numbers, that includes BMW, Hyundai and Kia, Mercedes-Benz, Mitsubishi, Subaru, Volkswagen, and Volvo. The sales numbers may change in six years’ time to require more or less automakers to comply. Those who don’t meet the quota are fined. The quota changes based on a staggering number of factors – specific technologies used, driving range, whether or not automakers’ targets are met by a certain time, and more. Like carbon emissions themselves, credits can be purchased outright from California’s Air Resources Board and traded between companies in order to avoid fines.
California’s population and economy is large enough that its legislative bodies can drive sweeping changes in US and international corporations, and it’s doing so for automakers as it has for other environmentally suspect industries. Ten other states have similar laws on the books, but none are as heavy-handed as California’s.

Another great article, Leslie. Maybe climate science, and CO2 in particular, will be depoliticized someday when the next natural cooling cycle begins – or when Obama-inspired environmentalnuts are forced to face the facts, whichever comes first. Hopefully Hillary won’t be able to prolong the latter.

So burning fossil fuels in order to keep warm, is now cooling the planet.

How stupid do they think we are?

It’s worked for them very well.

While it is prudent to follow best practices of risk management, it is immoral and primitive to exploit individuals based on observations and speculation that is increasingly outside of a scientific frame of reference.

A frame-based philosophy, science, was necessitated by a real world that is incompletely or insufficiently characterized (despite models or estimates) and unwieldy (despite super computers), which ensures accuracy is inversely proportional to the product of time and space offsets from an established reference. It is humanity’s incomplete knowledge and limited consciousness that is the source of a class of systems and processes known as “chaos”, that restricts accurate predictions about future states.

“Horse pollution was bad in 1900,” said Crichton. How much worse would someone in 1900 expect it to “be a century later, with so many more people riding horses?

“But of course, within a few years, nobody rode horses except for sport. And in 2000, France was getting 80 percent of its power from an energy source that was unknown in 1900. Germany, Switzerland, Belgium, and Japan were getting more than 30 percent from this source, unknown in 1900. Remember, people in 1900 didn’t know what an atom was. They didn’t know its structure. They also didn’t know what a radio was, or an airport, or a movie, or a television, or a computer, or a cell phone, or a jet, an antibiotic, a rocket, a satellite, an MRI, ICU, IUD, IBM, IRA, ERA, EEG, EPA, IRS, DOD, PCP, HTML, Internet, interferon, instant replay, remote sensing, remote control, speed dialing, gene therapy, gene splicing, genes, spot welding, heat-seeking, bipolar, Prozac, leotards, lap dancing, e-mail, tape recorders, CDs, airbags, plastic explosive, plastic, robots, cars, liposuction, transduction, superconduction, dish antennas, step aerobics, smoothies, twelve-step, ultrasound, nylon, rayon, Teflon, fiber optics, carpal tunnel, laser surgery, laparoscopy, corneal transplant, kidney transplant, AIDS. None of this would have meant anything to a person in the year 1900. They wouldn’t know what you are talking about.

Now: you tell me you can predict the world of 2100. Tell me it’s even worth thinking about. Our [emissions] models just carry the present into the future. They’re bound to be wrong. Everybody who gives it a moment’s thought knows it.”

— Michael Crichton in a 2003 speech on climate models at CalTech