Branco Cartoon – You Better Watch Out

Branco Cartoon – You Better Watch Out

She knows when you’ve been naughty. 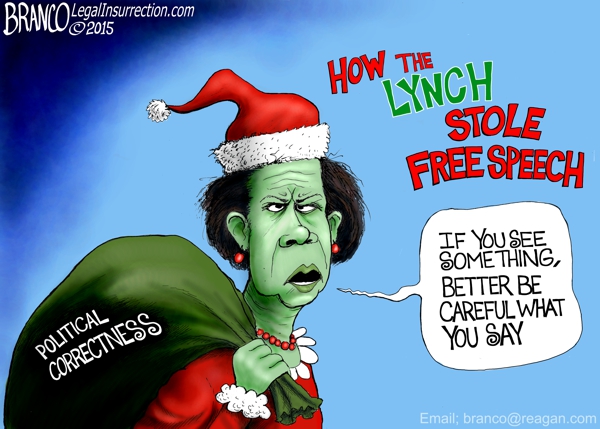 Well, it is a cartoon after all. Merriam Webster ” a drawing intended as satire, caricature, or humor <a political cartoon" Hit pretty close to home if you ask me.

Humor is not an excuse for lying. You can’t hit close to home while misrepresenting someone’s position. Lynch has not threatened censorship, so it’s a lie to portray her as a would-be censor.

It is a lie to portray her as having green skin. That is the nature of satire, most people get it.

Actually she has said that anyone speaking “anti Muslim rhetoric” will be investigated. You can see/hear her for yourself here:

There’s nothing wrong with investigating people who engage in such speech, to see whether they have also acted on it, or have incited people to act on it. If they have not crossed that line, then they can’t be prosecuted. But in any case you are not telling the truth. She did not say that anyone would be investigated for their speech. You’re making that up.

Really? An investigation is as destructive, invasive, and threatening as an IRS audit. It will cost you money, time, and likely some part of your reputation. If it as arbitrary as the description of a hate crime, it is something to be feared. If you like one so much, go for your own, but don’t tell us how harmless it is.

If that’s what you really believe, then you must oppose the authorities investigating mosques, and radical Moslem preachers. Because they have the exact same first amendment rights that you do. There is no right not to be investigated. If someone’s words make it reasonable to suspect that they may have crossed the line into incitement, or that their words will lead to violence, then it’s the authorities’ job to look into it. For instance, you have every right to call for the president to be harmed, but if you do so you can expect the Secret Service to investigate. They know better than to violate your civil liberties while doing so, but they would be negligent if they just ignored it. And the exact same applies to violent anti-Moslem talk.

There is no right not to be investigated.

But there is a “right to ride in peace”, right? Bless. I had almost forgotten you were a Libertarian.

Yes, when you board a bus or train you do have the right to ride in peace. MTA regulations explicitly prohibit music and loud noises, in order to protect this right. There is no right not to be investigated. There never has been such a right, and the fourth amendment clearly expects that people will be investigated, which is why it places limits on such investiations.

listen at the 1-minute mark; she clearly states her pride in the number of investigations into anti-muslim hatred ‘including rhetoric’

‘Rhetoric’…. you know that thing the old parchment paper thingy used to refer to as ‘speech’ in the old-timey days when we used to cling to our rights.

Yes, rhetoric sometimes should be investigated, to find out whether it’s connected with action. Unless you agree with Eric Holder and Bill de Blasio that the NYPD was wrong to spy on mosques.

She clearly implied that speech against Muslims would be prosecuted by the DOJ. You may not know it, but she apparently does because she walked it back Monday.

Look. When the federal government threatens the people, as she did, that’s a problem in and of itself. Even if you don’t think she meant what she said and implied–and she did mean it–the fact remains that she had to stumble it back for a reason (what do you think that reason was?).

Progressives, from Obama on down, are more worried about backlash against Muslims and about speech that “offends” them than about any of “our chickens coming home to roost.”

That’s why stories are written about the Jew who dared challenge the male SB terrorist or about how the male terrorist’s beard made people (this I doubt sincerely) mock him. Gee, if only we insensitive Americans would stop being such bigots, ISIS would decide Allah didn’t mean for a GLOBAL caliphate of believers after all . . . he just meant, you know, here and there, now and then.

The way to fight this is to defy it by acting rationally…and very overtly and vocally.

Well, she seems prepared to override the first two amendments. What’s next — quartering soldiers in our homes in violation of the third?

The liberal’s culture of political correctness has literally killed people. They have blood on their hands, and they need to be called out on it, but no one’s going to. Everyone’s too wrapped up talking about guns.

Linked on my blog: http://triggerwarningblog.blogspot.com/2015/12/af-branco-merry-lynch-mas.html

That’s because it’s obvious that guns cause Islamic violence.

Just ask the 9/11 terrorists. It was all too easy for them to get their hands on guns and then murder thousands of Americans with them.

Plus, buildings would be a lot safer too if the no fly list applied to U-Haul and Penske trucks. They can be turned into bombs ala Oklahoma and the first attempt at the world trade towers in the early 90s.

And don’t get me started on nails and pressure cookers used at races. Or pipe bombs in general. Or propane tanks. Or liquids stored in shoes. Or …

The dependent class can see what is to come from the actions of their votes. In their arrogance and perceived indestructibility of their political position both Lynch and Obama have declared war on the American people and threaten our freedoms for ourselves and our children. Be advised for none in history have declares war on America and won. You seem at present to have the upper hand with media behind every word you say but as we see in Europe that can change quickly. Islam has taken advantage of our good will not only to all who wish freedom and prosperity but also to our ignorance in understanding this enemy. Indeed we have many who truly want peace but how do we tell them apart? Are we willing to put our children in harms way for people that wont even stand against the ones who would cause them harm as well? Sadly we have only one way to be sure and that is to remove them from our nation.
Grampa

People like Loretta Lynch, act like they don’t know what is in our Constitution or Bill of Rights. They think that they can take away our Freedoms at their own wills. I actually think that Eric Holder is still in the background pulling the strings.Just with what Oblamo has done in the last two week, HOW could anyone not think that he is a Muslim ? He has taken our Enemies side, ever since he has been in office. I think members of Congress are in a condray, as what to do with a Leader who is ” Anti-Country.” He has replaced strong Military Leaders with people beholden to him personally. This destruction of America must be halted.