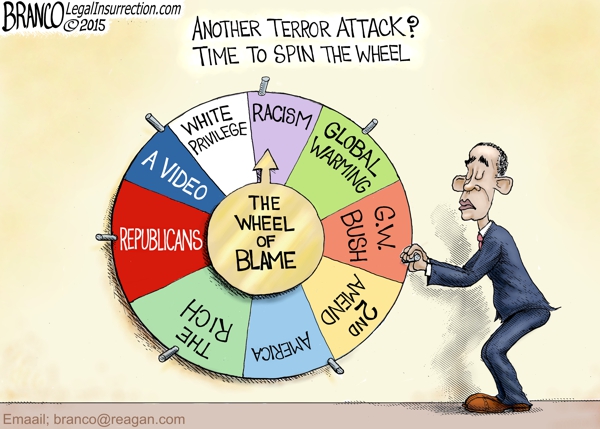 Questions the media absolutely will NOT ask:

1) Did Hillary’s State Dept. bring that Qatar terrorist to the US? Did John Kerry’s?

2) Did Obama’s deliberate policy of massively increasing Muslim immigration to the US (averaging over 100,000 per year from Muslim countries, virtually all Muslims rather than the Christian or Jewish victims of genocide in those same countries) result in ALL, or at least some, of these Muslim Terrorists coming to the US?

3) Aren’t the same people that voted for Democrats, who are all-in for massive immigration to supplant the American population so these same D’s can stay in power, responsible for these Muslim Terrorists being in the US?

4) The very same people that, ever since the Muslim Terror atrocity in Paris, have been saying that there’s no risk in bringing in 100-200k Syrian “refugees” (those numbers being the specific requests of Congressional D leadership, in House and Senate Committee hearings)are now pretending that the most recent Muslim Terror attacks in the US somehow have nothing to do with Islam – are they insane? If they were DELIBERATELY working to inflict as many Muslim Terror attacks on innocent American Citizens as possible – what would they be doing differently? Do they feel any guilt over their actions? Do they still support bringing in Syrian “refugees” either at 10,000 or 15,000 as Obama claims (despite the blank check to fund as many as he wants that Paul Ryan is giving him, and his unlimited authority to bring “refugees here) or the 100,000 – 200,000 that D leadership has stated they want?

4) Will the media RETRACT, officially, ANY of their outrageous claims that these shooters were Republicans / Right Wing / Christian / Pro-Life “terrorists” now that the facts are known and it is proven, beyond any conceivable doubt, that they are Muslim Terrorists?

6) Will ANYONE on the Left ever acknowledge the FACTS that this was yet another “gun free zone” in a state with about the most (the single most?) restrictive gun control laws in the country? Will they acknowledge the FACT that the single best thing that would have reduced, or eliminated, the casualties would have been an armed law-abiding citizen on hand to take out the terrorists?

7) The attack was against a CHRISTMAS PARTY by a MUSLIM TERRORIST. Will either of those facts ever appear in even a single leftwing media outlet? Funny but, just hours before the attack a friend of mine was ridiculing me on Facebook for refusing to buy into his thesis that the “war on Christmas” was a conspiracy theory. Aside from the obvious fact that a terrorist just attacked a Christmas Party because, apparently, he found it offensive, there’s the FACT that this Christmas Party couldn’t even be called what it was – it was officially a “Holiday Party”. Speaking of which, just last week my boss handed me the invitation to my companies Christmas Party – I opened it to find an invitation to a “Winter Festival”. I looked at him and said, “I’ve never celebrated anything called ‘Winter Festival’ in my life, and I never will. If the company decides to throw a Christmas Party though, be sure to let me know.” and tossed the invite in the trash, and walked away.

ABC Report: “Shooting in San Bernardino Leaves at Least 14 Dead
Police are still searching for a motive.” Spin that wheel so they can finish the story.

Yes, there should be another option on the wheel: “Guns” …

Tweeted! And have just retweeted this one as well 🙂

Hi @johnpodesta, any thoughts on your employee slandering the GOP and NRA in the wake of the Muslim terror attack? https://t.co/q96qiEj8fd— JWF (@JammieWF) December 3, 2015

“They said Farook recently traveled to Saudi Arabia and returned with a new wife he had met online.”

I had this published in American Thinker in 2009:

Unfortunately I’ve never seen this one (Very good BTW). However, I have seen cartoonist use the same theme on various issues. This is my take on this issue. 🙂

There’s no space for “workplace violence.”

Other than that spot on, as usual. Linked over at: http://triggerwarningblog.blogspot.com/2015/12/af-branco-wheel-of-blame.html