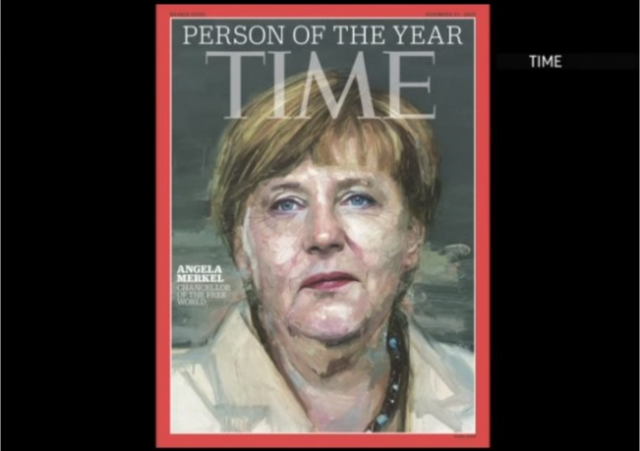 TIME magazine named German Chancellor Angela Merkel as its Person of the Year. The New York-based magazine praised “her resilience and leadership when faced with the Syrian refugee crisis and turmoil in the European Union over its currency this year.” Angela Merkel is the first women to lead Germany and last month completed uninterrupted 10 years at the helm of Europe’s largest economy.

Merkel has often been referred to as the most powerful woman in the world. In fact TIME’s celebratory issue’s cover story calls her “the Chancellor of the Free World.” Since President Obama has abandoned the leadership of the Free World as a matter of principle, the top job was up for grabs anyway. The problem is only the direction Merkel is steering the Western World in face of the historic migrant crisis.

Republican hopeful Donald Trump was upset over the fact that judges at TIME didn’t chose him for this year’s award, and as Trump (rightly) put it, “picked a person who is ruining Germany.”

But judging by the cover story and accompanying articles that TIME ran justifying its decision to pick the German leader, neither Trump nor anyone else in this year’s fray had the slightest chance. It’s just one big deceleration of love to Angela Merkel, or as TIME says, to the “de facto leader of a continent”.

In the process TIME embellishes Merkel’s biography, inflates her stature, looks over her blunders and leaves out the “inconvenient truths.” TIME writes:

Europe’s most powerful leader is a refugee from a time and place where her power would have been unimaginable. The German Democratic Republic, where Angela Merkel grew up, was neither democratic nor a republic; it was an Orwellian horror show, where the Iron Curtain found literal expression in the form of the Berlin Wall. The shy daughter of a Lutheran minister, Merkel slipped into politics as a divorced Protestant in a largely Catholic party, a woman in a frat house, an Ossi in the newly unified Germany of the 1990s where easterners were still aliens. No other major Western leader grew up in a stockade, which gave Merkel a rare perspective on the lure of freedom and the risks people will take to taste it.

It is true that Merkel’s father Horst Kasner — who greatly influenced her beyond the formative years — was a Lutheran priest in oppressive Communist East Germany. TIME doesn’t tell its readers that in 1954 Horst Kasner voluntarily moved from Hamburg in West Germany to Communist controlled East Germany, right after his daughter Angela’s birth. This was a weird move for a priest in a time when Stalinist purges of Christians and anti-Communists in Soviet Union and Eastern Block were at their peak. In same year he fled to the Communist-held East Germany, over 180,000 Germans fled from East to the West.

So why would a Christian minister in his sound mind move over to the dark side, TIME won’t tell us that. Truth is; Merkel grew up in the Orwelian hell of East Germany that TIME so eloquently described, only because her father choose to take her there.

Further, TIME wants its readers to believe that Merkel’s political career first began in her late 30s when she joined the Christian Democrats (CDU) in 1990s after the falls of the East German Communist regime and the Unification of Germany.

There’s no extent to which the liberal media wouldn’t go in order to whitewash the past of a demigod it decides to place on the public pedestal. If it means rewriting the history or omitting embarrassing biographical detail, so be it.

TIME fails to inform the readers about Merkel’s political career in the East Germany during the Cold War. Merkel was functionary of the East German Communist youth league (FDJ) — and by all accounts an enthusiastic member. Her ideological reliability was key to her successful career under the Communist system. She secured a comfortable and lucrative academic career, and from 1978 right up to the fall of the Berlin Wall she worked at the prestigious Academy of Sciences (East Germany).

If Merkel wasn’t a bleeding-heart communist back in those days, she was at least a calculating opportunist. When dissenters and anti-communists where sifted out from the public, commercial and academic life, she was climbing the academic ladder unhindered. Merkel never came clean on her past, and infatuated mainstream media can’t be bothered to put her feet to fire for that.

The migrant crisis inundating Europe is Merkel’s own creation. Single-handedly she suspended regulations in place to register and scan migrants at the Europe’s outer border, creating a migrant influx of biblical proportions that now threatens to transform Europe’s demography in a single generation.

Judging by the sheer magnitude of the havoc Merkel has wrecked on Europe, she could well be the “Person of the Year” if not more, but she doesn’t deserve the accolades.

And Obama won the Nobel Peace Prize. How did that work out?

Is there a pattern here?

I am absolutely shocked Jenner didn’t get that.

The populist and the press like to forget that he / she / shim killed someone when he rear-ended a car stopped in traffic. Us lesser people would probably be charged with vehicular homicide and spend some time in the clink.

Why the German people don’t rush the Capitol and give her the mussolini treatment is beyond me.

They’ve been neutered by guilt

So, the new polite term for a Euro royal FU is: Merkeled it!

Of course, new in the USA, it might be that we could use the term: JEBed it royally!

This is WWIII, with the following combatants:

So far, the good guys are losing.

Hitler must be turning in his grave.

PC gone out of control.

Merkel has had some good years but 2015 was not one of them.

The biggest factor in her getting this is they HATE Trump.

TIME just didn’t want to say the real reason. This is their last chance to give it to her.

Well perhaps she will be long remembered as the woman who aided in the final collapse of Europe, or at least Western Europe. The EU applauds it’s own self-destruction, and TIME is right there with them.

Not the collapse of Europe but the EU for sure.

Good news is, if we keep relatively quiet about it, no one will know.

The big news of the year is the Syrian refugee crisis and the long-term effects it’s going to have on European politics and the EU. And that’s all on Merkel.

Time’s PotY isn’t about goodness, it’s about importance. She had a huge impact. This is an award that Hitler won once and Stalin twice. Heck, they gave it to King Faisal for the artificial oil shortage he engineered that crashed the world economy in the ’70s. And to the Ayatollah Khomeini during the Iran Hostage Crisis. It’s *NOT* praise.

Valid point, but Time does present her open door to migrants as moral exemplary, a way of redeeming Germany from the taint of Nazism — which is how European elites have long been justifying their welcoming policy to mass Muslim immigration and their heavy-handed treatment of citizens who object to having their neighborhoods Islamized.

Well, to be fair, they were gushing with praise when they gave it to Stalin, too.

Shouldn’t Trump be considered the new FDR by the liberals? After all FDR did intern the Japanese people and as I recall some Germans. Maybe Trump is just trying to follow in FDR’s footsteps.
If that idea ticks off liberals, well tough sh..

Pity that her “rare perspective on the lure of freedom and the risks people will take to taste it” didn’t give her an appreciation for freedom of speech, or the freedom of people to govern their own nations rather than be ruled by a remote bureaucracy, or even for the right of her countrymen to save their own culture.