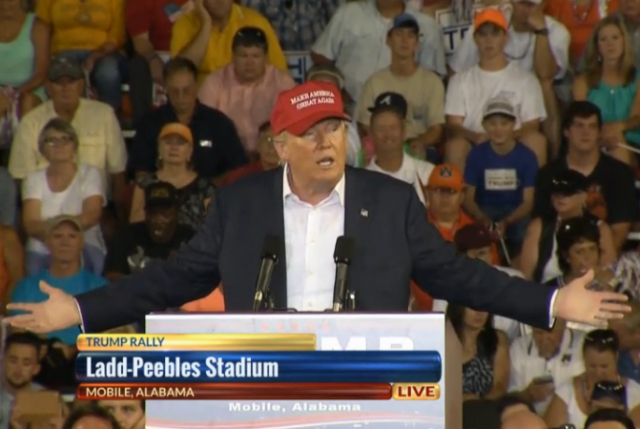 Trump Derangement Syndrome is in high gear among the GOP establishment and even more so among those on the left.  In a jaw-dropping story, an ACLU board member took to Facebook to urge people to massacre people who support Trump.  This person has since resigned in disgrace.

A board member for the American Civil Liberties Union of Colorado has resigned after urging people to kill supporters of presidential candidate Donald Trump.

The post states, “The thing is, we have to really reach out to those who might consider voting for Trump and say, ‘This is Goebbels. This is the final solution. If you are voting for him I will have to shoot you before Election Day.’ They’re not going to listen to reason, so when justice is gone, there’s always force…”

“It’s almost like, you will think the way we think, you will do what we want you to do, or we eliminate you?” says Steve House, chair of the Colorado Republican Party. 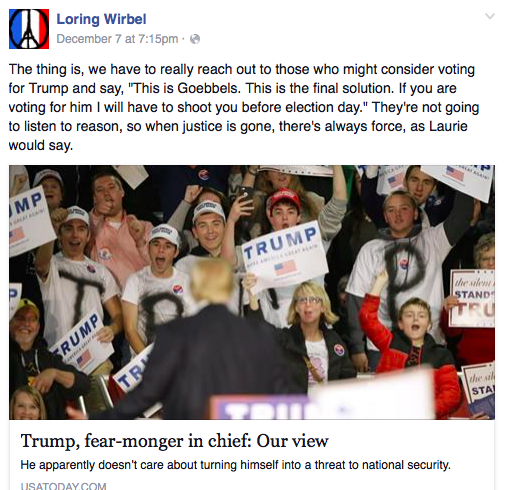 [Image via the Daily Caller]

In a bizarre follow-up, Wirbel responded to a commenter’s suggestion that killing Trump supporters might be a bad idea and that defeating Trump on the basis of ideas and reason would be better by stating:

“But see, most people don’t even know what reason is. They don’t use anything other than the lower brain,” Wirbel wrote, “and would no more make decisions based on logical conclusions than choose milk based on a theme song. The base of the Republican Party is unfamiliar with a cortex.”

So reason, in this person’s mind, is exemplified by shooting people who don’t agree with you.

Later, Wirbel called Trump a “hate-speech felon who should be in prison.” Though when asked how someone could be imprisoned for their words, he backed off, saying, “There was a little droll intended in that — the European leaders (even Cameron) want their own speech laws applied.”

The Colorado ACLU has released the following statement in response:

The ACLU of Colorado does not condone the recent personal Facebook post of regional volunteer Loring Wirbel.

The ACLU of Colorado is a nonpartisan organization. We do not endorse candidates or parties. We have proudly spent decades fighting for the rights of all Coloradans, regardless of political affiliation, to vote and to freely participate in the political process.

Our members, supporters, and volunteers are free to express their own personal views and opinions in their personal lives. We have fought for decades to preserve that right, as well, for all Coloradans, no matter how strongly we disagree with the content.

However, the personal posts of members, supporters, and volunteers on their own personal social media sites should not be mistaken for endorsements or official statements of the ACLU of Colorado.

I wonder where Attorney General Loretta Lynch stands on this?  After all, she has promised to pursue cases in which she deems speech as intended to elicit violence.  A bald statement that people should shoot and kill other people for supporting someone Wirbel dislikes would seem to fit the bill.  Will it matter to Lynch that Wirbel is advocating the slaughter of millions of Americans  . . . who may not be Muslim?

So she wants people to shoot Trump supporters with the guns they want to take away?

If by luck the hater has a gun, what are the odds the supporter doesn’t?

If they both have guns who is more likely to hit something they are shooting at?

Sounds like there is a big hole in the plan.

It’s a he not a she, although with gender declarations nowadays it could be a she.
Followed standard liberal tactic when caught – lied and blamed someone else. Didn’t work, he’s not obama or hitlery.
When he resigned, he declared his victimhood by saying his post was taken out of context and he was being smeared.

Surprisingly, the police aren’t going to investigate last I read, so apparently posting about killing Trump supporters is just fine and dandy.

“Wirbel said late Thursday night that he did not write the post, and instead, someone pieced together a series of comments and posts he’s made on Facebook.”
——-
When that didn’t work and he had to resign, he called it attempted humor.
“Loring Wirbel told The Gazette (http://goo.gl/onVKKf ) the post was not meant to be taken seriously, but he acknowledged it could be seen as offensive.

“It was intended totally as a joke,” he said. “They are taking that stuff out of context. It’s smear politics.””

“It was intended totally as a joke,” he said. “They are taking that stuff out of context. It’s smear politics.”

“It was intended totally as a joke,” he said. “They are taking that stuff out of context. It’s smear politics.””

“It was intended totally as a joke,” he said. “They are taking that stuff out of context. It’s smear politics.”

Not only does he lack a sense of humor…he seems to have a bad stutter.

All-too typical leftist drivel – they are incapable of employing any rational arguments, they can’t cite facts in evidence of their inane positions, so they resort to emotionalism, vitriol, and other reptilian-brain responses.

Still no charges filed against the lesbian gym teacher who Tweeted that people should burn down Christian owned Memories Pizza in Indiana.

Never even a suggestion that it would be investigated as a Hate Crime.

Nor should there be any charges; it’s clearly protected speech.

You seem to have no idea what a hate crime is; it’s a crime committed with a particular motive. If there’s no crime in the first place then by definition there can’t be a hate crime.

Colorado GOP state chair Steve House has little room to talk given he slandered & lied about Colorado GOP A. G. Cynthia Coffman & other’s this past summer. Especially given A. G. Coffman is the one Republican official of the state who’s waging a so far successful court battle with the EPA over water, air, & energy issues.

Any person who advocates for the unlawful destruction of private or public property by the use of physical force, or the unlawful injury of any person, or the unlawful taking of human life, as a policy or course of conduct, under circumstances constituting a clear and present danger that violent action will result therefrom, commits a class 6 felony.

Of course, the police have been instructed not to investigate this further or file charges. Yes, it is a Republican area; but the GOPe would not mind if Trump or his supporters were shot, and also they would not do anything to inconvenience any Leftists.

That law seems unconstitutional on its face. Advocacy, even of crime, is protected by the first amendment. Incitement requires the speech to be calculated and likely to drive its listeners into such a frenzy that they are moved to immediately commit a crime, without pausing to think about it. Mere likelihood that speech might eventually lead to violence, let alone a likelihood that the strength of the advocacy will persuade someone of the rightness of violence, is not enough.

No, I don’t know it, and neither do you. Paranoid imaginings are not knowledge. He would be treated exactly the same, because his words are clearly not a crime.

Irony. When brown shirt fascists of the left yell fascist at someone for simply disagreeing with the left’s fascism and socialism.

Of course the Lynch Mob will ignore this.

Wirbel should done the right thing, and opened his stomach.

Note to Wirbel: Karma here may dictate that someone will open it for you – and it could be one of the many thugs you helped keep from being appropriately incarcerated.

I wonder where Attorney General Loretta Lynch stands on this? After all, she has promised to pursue cases in which she deems speech as intended to elicit violence.

No, she has not. No matter how often you repeat this claim it won’t get any truer. She promised to pursue actions, not speech. And if any actions come out of this speech I’m sure the appropriate authorities will pursue them and prosecute them, but the speech remains protected, and she was very clear about that.

What better way to trample somebody’s civil liberties than murder them. For some reason, this isn’t surprising.