…It’s just that the definition of freedom has changed 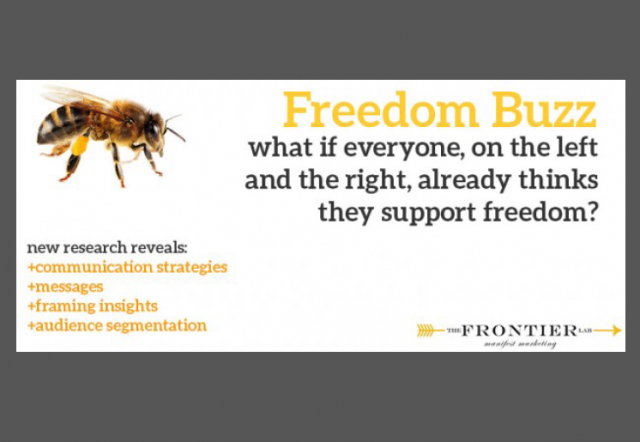 It’s sobering to see such staggering ignorance about free speech and freedom in general on display on American campuses this week.

The special snowflakes of the Snowflake Protests (Yale, Mizzou, etc.) are providing a window into the results of the progressive takeover of our education system — from pre-school all the way on up to college and beyond. (Common Core will just streamline the process a little more.)

Alarming, but in keeping with findings about Americans’ demand for freedom, or lack thereof, detailed in The Frontier Lab’s recent study, “Freedom Buzz.”

Ask Americans about freedom, as we did in this study, and you get what seem like familiar responses: freedom is the American Dream, the ability to worship and speak freely, or to choose your own path in life. Pretty standard.

Nearly 100 hours of research interviews, and a national survey to test the findings, revealed two trends in how many Americans perceive the value of freedom.

While the first segment has a familiar relationship with freedom, the second, “serenity-seekers,” have a buzzword relationship to the concept of freedom. The American Dream, the freedoms enshrined in the Bill of Rights, etc., — these aspects are all important to the “serenity-seekers” because they provide something else, primarily: “stress relief,” the ability to seek out entertaining activities, travel to exotic locales around the world, and the right to a serene existence, free from judgment.

Terms like the “American Dream” rolled off the tongue, but when it comes to describing the true value of freedom, a new picture began to form. You see, the “serenity-seekers” believe in, and say they support, freedom — it’s just that they’ve revised (or had revised for them) the definition of what freedom is. 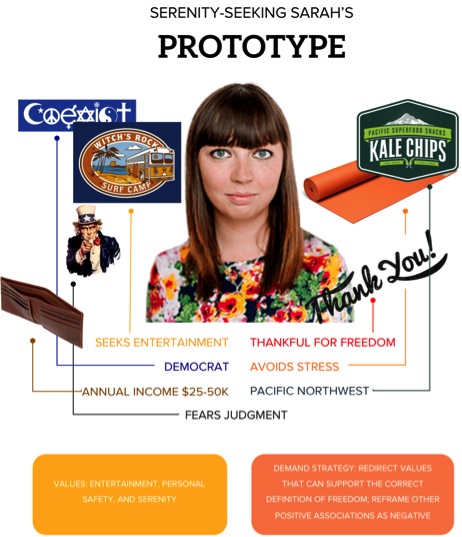 Missouri’s Brenda “I’m tired of the First Amendment” Smith-Lezama’s call for “safe space” perfectly exemplifies the concern among serenity-seekers about being protected from conflicting ideas.

There simply is a lack of demand for freedom as we (used to) understand it. The simple insight may be worth pondering because I believe it explains why efforts to convince Americans that more freedom is desirable are really wasted — for example, in the “serenity-seeker” universe, they’ve already got plenty of “freedom” — it’s other things they demand. (Follow the link to read the survey results about demand for freedom and how the demographics played out.)

It’s a big change from the premise from which most, if not all, of my colleagues working to promote freedom, begin their messaging efforts. Low demand for freedom suggests a strategy not about connecting how progressives’ policies reduce freedom, but assessing how to build demand for true freedom.

Here is a glimpse at some of the recommendations for communicating with “serenity-seekers” from “Freedom Buzz”:

1) Paint a picture of a life encumbered by restrictions and drudgery when TRUE freedom – the rights of the individual – dissolves.

Offer scenarios where they viscerally feel their serenity threatened: for them, this would be most compelling if it were to affect their life of unending choice, their protection against being judged, or their ability to maintain financial security.

MESSAGE: Ambitious and adventurous Americans look forward to a life where they make their own choices, but this life is being taken away without them noticing.

2) Evoke the stress that comes with freedom by undermining the fiction that life is judgment-free in this state.

The values research revealed it is because the Serenity-Seekers are assured they will not be judged (and therefore can decide on their own morality) that they find freedom to be so compelling. Therefore, showing that judgment occurs, even increases, when their definition of freedom without individual rights succeeds, will be jarring and frightening to their stress-free existence.

MESSAGE: Community bonds dissolve and life becomes complicated and restricted when freedom strays from its foundation in individual rights.

3) Remove the confidence that “Freedom is the default” in America and that they can rely on this reassurance.

Believing that freedom has been on a peaceful train ride throughout the history of America without derailing allows Serenity-Seekers to avoid responsibility for its maintenance, and disengage from freedom’s true meaning. Therefore concrete examples of the derailment of freedom should be communicated within the framework of its ramifications on the predictability of Americans’ future.

MESSAGE: Life is more unpredictable and unstable than at any time in America’s past because we have failed to see the crumbling of freedom.

So as we observe the Snowflake Protesters in action these weeks, I hope we all assess whether our communications strategies need to change, radically.

Risk adverse Millennials seek safe places, places free of conflict (free speech being the ‘enemy’ of serenity), competition (the marketplace of ideas and of flourishing) and conviction (the belief in Absolutes).

Yet, being alive is risky business, demanding certitude of one’s beliefs and a steadfastness while being risk adverse leads to uncertainty, despair and ultimate bankruptcy.

“Let me be perfectly clear.” Obama’s emasculating national polices have exacerbated despair in the hearts and lives of millions of Americans by creating uncertainty in every quarter where his distended ego finds itself.

The Left, without fail, redefines terms – hijacks them! – and turns them into tools to attack the very things that they REALLY mean. It is a trick of deception that is devious and downright evil – and oh, so effective because you can say you “stand” for something, and they in turn do, too – yet the meanings, the definitions are polar opposites, in most cases.

(Then, of course, you have the segment of this Leftist/marxist side that says that FREEDOM is bad…..)

There is a word that has been pounded into our public consciousness since about 9/11, and is “safe.” Suddenly, everything seemed to be about somebody else keeping us safe. Those kinds of speeches have been scraping on my nerves since they started.

It is not a function of either adults or Americans to passively expect others to keep us safe. Adults are made to protect their families, and do the great work of building something new, taking risks and having adventures.

Stuff will happen. What Americans are for is handling that stuff. When George W. Bush was confronted with stuff, the Washington Post referred to “grasping the nettle.” That kind of action is not safe, but it is effective.

“The cake is a lie” and so is safety in life. Nobody gets away without having to deal with revolting developments, and the purpose of our government is to remove the barriers to allowing vigorous adults to deal with stuff.

PS. This model draws a lot from Buddhism and yoga. It might interest some to know that, in Autobiography of a Yogi, there is some history about that movement, and how it came to the US. It seems the followers of that persuasion were utterly charmed with the vigorous application of their own principles to our lives. They liked us and felt comfortable among us because we had it right a few decades ago.

Perhaps that’s why the Dalai Lama liked George Bush so much, and why Obama was rude to him.

Buddhists and yoga believers think that there is a progression in life, where young people are to be vigorous and adventurous, and builders, then retire to contemplation. The notion that young people should seek safety for themselves and serenity before taking action in this world, is a perversion of their teachings.

The root of the problem in the network of Marxists professors subverting impressionable minds.

Take the professors out of the equation under the RICO act.

So, YOUR solution is to criminalize speech you don’t like.

That’s not the first time I have heard that suggestion. The climate alarmist want to use RICO to silence opposition. Interestingly enough is sounds just as asinine in this context as it does the other.

Chuckling… at the replies.

I believe there is a criminal conspiracy loading marxist professors into education for the purposes of breaking the law.

Yes, in my opinion, these marxist professors have stepped over the line and they are not lone wolves.

This merry band of malcontents are nothing more than a plague of locusts.

Anne: Welcome back! we’ve missed you.

They may not realize it, but the society they want to create is comparable to prison. Prison is the perfect socialist utopia: everything is provided by the state; everyone is equal; no competition.

Freedom isn’t demanded. Freedom is fought for and earned. Being jerks and immature snots demonstrates that they can’t be trusted with the responsibility of freedom. Instead all of this is because the spoiled brats want what they want. The more they get, the more they will demand. They have to find their place in an existing world, warts and all. The world isn’t there to accommodate their continuous temper tantrums.

One of the main problems I see here is that people keep giving into these mobs. There was no reason for the resignations that have happened. As long as they keep winning they will keep doing this crap.