You’ll be having turkey for Thanksgiving, just not this one. 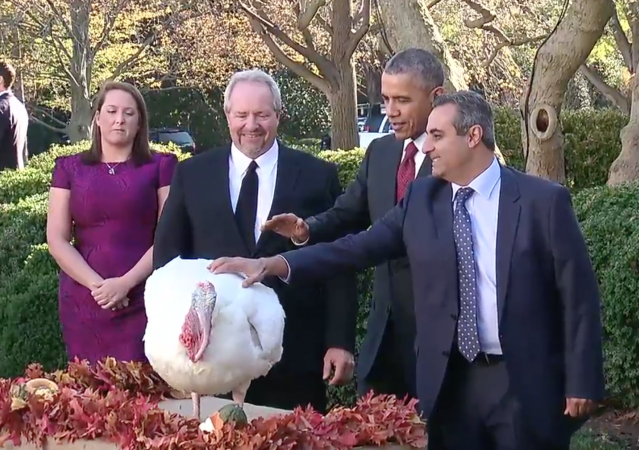 Today is the annual pardoning of the Thanksgiving turkey.

Watch the TOTUS (Turkey of the United States) receive an official meal pass.

Did the President pardon that turkey yet? BECAUSE I HAVE NEW EVIDENCE.

Who will be the first Republican Presidential candidate to call Obama weak on turkey crime? My money's on Huckabee.

Just once, I'd love to see a president deny the traditional turkey's pardon and behead it in front of a horrified press pool.

Obama WOULD pardon a white turkey

I love the turkey pardon & the president making his daughters cringe with lame dad jokes pic.twitter.com/mntS3TBQej

.@POTUS says he cant believe this is his 7th turkey pardoning "time flies even if turkey's don't"

Actually, this was a trial run of the undemonstrated theory that a president may pardon himself. That has never been done, ISFAICDTTBOMAAPK, and might be in anticipation of that likely felt need come January 19, 2017!

OTOH: This is a pardon of a turkey by a turkey!

Was the turkey he pardoned Hillary Clinton?

So what’s the white bird with the TOTUS ?

Where was the First Lady during the “ceremony”? Is she on vacation somewhere?

How come the turkey is pardoning himself? He should be wearing an orange jumpsuit with the rest of the terrorists at Gitmo.