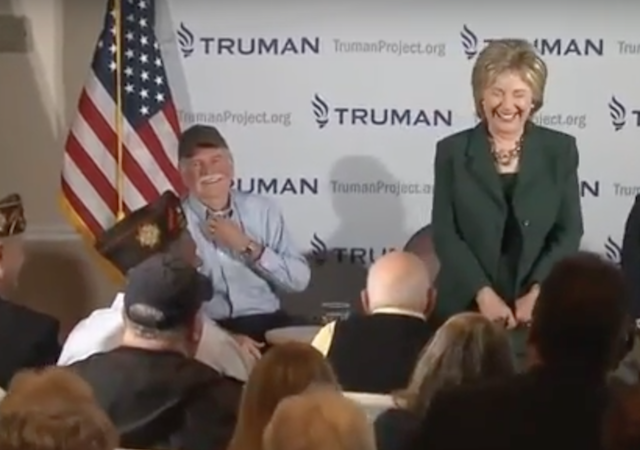 Mark today on your calendars as the day that Hillary Clinton stared boldly into the face of an aggressive and violent patriarchy—and cackled.

Actually, what happened was that an attendee at a Team Clinton Q&A on veterans and the military got a little too heated with his comments about Carly Fiorina, and Clinton laughed it off.

The man—who is a veteran and who claims to have been an HP employee from 1999-2005—expressed his frustration with Fiorina by saying, “every time I see [Carly Fiorina] on TV I want to reach through and strangle her.”

I want to pump the brakes on the outrage train for a second. I have no doubt that within the next 24-36 hours, we’re going to see this guy (or maybe other members of the audience) on the primetime circuit crying out, “for the love of God, no, I don’t feel a burning desire to actually strangle Carly Fiorina.”

But that’s not the point.

You would think, after all the time this woman spent hauling herself up ladders and crashing through glass ceilings, that she would take great offense to the idea of a man—those men and their man feelings, ugh—sitting in an open forum and even joking about wanting to commit an act of brutal violence against a fellow sister.

This is the outrage. It’s incomprehensible to me how a candidate—or for that matter, a movement—can attack and harangue an innocent populace over invented offenses and “microaggressions” while at the same time laughing off a comment that, if made by anyone else (read: a republican, for example) would be immediately labeled as misogynistic, violent, dangerous, and a product of a patriarchal lynch* mob.

Clinton will play this off as she always does, but conservatives can chalk this one up as yet another example of how the progressive double standard works when it comes to just what sort of woman feminists will stand up to protect.

*There, I made it racist, too!

She sounds like her mental state is very close to the edge of going into collapse. It can’t happen soon enough.

Just start saying it about Clinton, and when challenged say that she gave me permission to use that language, by laughing at it when it was directed at Fiorina.

When will she denounce and repudiate the violent, eliminationist rhetoric of her followers?

She will on a cold day in Hell.

The guy is a veteran and a voter. What he said is only a figure of speech. He obviously finds Carly offensive Carly is a politician and no one needs to defend her.I would think that Trump on the other hand would be Carly’s friend. (co-Republicans?) Personally, I think Carly comes off as angry, offensive, aggressive, and combative. I am also a woman and very indifferent to politics. Carly certainly attacks Hillary everytime she opens her mouth and usually with unfounded statements.

If you were to tell her every time you see Nancy Pelosi on TV, you want to reach through and strangle her, she wouldn’t be laughing.

Fiorina should use this tonight. In one well-delivered comment she can skewer Hillary for laughing at the suggestion of a man strangling a Republican candidate, the only woman Republican candidate by the way, and then pointing out that this is the same Hillary who criticized Trump for not “correcting” someone in a large Trump audience who suggested that obama is a muslim.

She’s a bigger tool than Moonbat Bernie. Democrats have a choice between hard stool or soft stool, but it’s shit all the same.

I hope this comes up at the debate tonight

Please tell me again who is starting a “war on Women”
Just wondering?

Noah Rothman caught NBC in a huge deception – they tweeted out a picture supposedly of Hillary reacting to the threat against Fiorina, with a grimace! As we can see, she actually thought it was funny.

He called them out, Twitchy picked it up: http://bit.ly/1HwwV8c

Call me what you want. When I see Hillary on TV I want to reach through it and strangle her.