These are not serious people 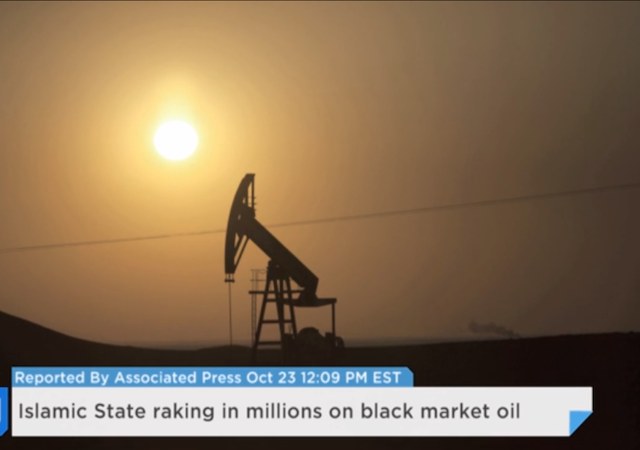 Granted, these are the same people that believe the climate change is the world’s greatest threat, but I digress.

Morell cautioned that he does not “sit in the room anymore” where strategic decisions are made, but said prior to the Paris terrorist attack earlier this month, “There seemed to have been a judgment that, look, we don’t want to destroy these oil tankers because that’s infrastructure that’s going to be necessary to support the people when ISIS isn’t there anymore, and it’s going to create environmental damage.”

Since the attack on Paris, the U.S. has tried to cut off the terrorist organization’s revenue stream by bombing oil trucks.

“So now we’re hitting oil trucks,” Morell said. “And maybe you get to the point where you say, we also have to hit oil wells.

“So those are the kind of tough decisions you have to make,” he added.

ISIS has accumulated millions of dollars to fund its military operations by producing and exporting oil in the parts of Iraq and Syria under its control.

Contrast that to reports from over a year ago explaining how ISIS funds itself by smuggling oil to other hostile actors:

“With the important exception of some state-sponsored terrorist organizations, ISIL is probably the best-funded terrorist organization we have confronted,” Treasury Undersecretary for Terrorism and Financial Intelligence David Cohen said on Thursday in a speech to a Washington,D.C., think tank. At a subsequent briefing at the White House, Cohen declined to provide an estimate of the group’s net worth today.

From mid-June until President Barack Obama unleashed airstrikes in Iraq and Syria against it, the Islamist organization scored $1 million per day from smuggled oil, Cohen said at the Carnegie Endowment for International Peace. He declined to say how much the airstrikes, which began on Sept. 23, have sliced into the group’s oil revenue.

The oil operation, which has drawn the most scrutiny, relies on long-standing smuggling networks operating in oil-rich parts of Iraq now under IS control. IS extracts the petroleum and sells it to smugglers, some of whom use “relatively sizeable tankers” to get it onto the black market.

At the official world market price of about $100 per barrel, IS at its peak would have been generating approximately 10,000 barrels. But Cohen said IS was selling “at substantially discounted prices,” the quantity was likely much greater.

Cohen said IS sold oil to middlemen, including some from Turkey. It also sold to Kurds in Iraq, who resold it to Turkey. Even Syrian strongman Bashar Assad, whom IS aims to overthrow, arranged to buy oil from the group, he said.

These are not serious people.

No one in this administration should be a position of leadership… anywhere, including your local McDonald’s.

There’s no reason to destroy a well to cut off funding to ISIS if you can destroy the method used to take that oil to the next step, such as pipelines and tankers.

Of course that assumes that cutting off funding to ISIS is what this administration wants to do.

He should have sent in the EPA, that would have ended their distribution system.

Look for the hidden assumptions in this statement: “The Obama administration seems to have decided protecting the dessert trumps destroying radical Islam and protecting western civilization.”

The assumptions are that obama has some interest in both destroying radical islam and protecting western civilization, whereas in reality he has no interest in either.

I’m sure glad Obama is driving this boat. Why, think what might have happened in WWII? Some idiot might have authorized a raid on the Ploesti.

Or busted damns on the Ruhr River…

One thing to consider. Many of the oil wells in that section of the world are under positive pressure (whatever the technical term is). If set on fire, they will burn, burn, burn, until there is no more pressure to drive the oil out of the well.

I’m all for protecting dessert, except too much chocolate makes my face break out and sweets go straight to my belly.

We need to destroy ISIS. People of the world, make peace with your Creator because if you are too close to ISIS, deliberately or accidentally, your life may be forfeited.

NO WAR FOR CUPCAKES!

Guys! The sweet stuff after dinner, which Mrs. 0bama doesn’t want us eating too much of, is “dessert”, with two “s”‘s, since everybody wants more of it. The place with few people and little rain is “desert”, with one “s”, since we don’t want much of it.

So how many people are living near the oil wells in the desert who are going to be hurt by the pollution? Too bad there aren’t any abandon mines, a la Colorado, the EPA can protect them from.

One of the pilots attacking the oil truck convoy said they ran out of ammunition. Of course they dropped leaflets 45 minutes in advance of that bombing.

No. These people are not serious in the least about destroying ISIS. President Barack Hussein 0bama wants to “contain” the caliphate. In order to be a caliphate, they must have territory. We need to deprive them of territory.

I always remembered it this way:

If they destroy the oil wells it will help with global warming because there will be less fuel for pickup trucks and suv’s.

I am just surprised he is not bombing oil wells in Oklahoma and Texas.

C’mon everyone, Don’t you recall the sheer hell on Earth after Saddam the Late destroyed all those Kuwaiti oil wells, setting so many of them on fire, blacking the sky around the world for months on end, taking all those many years to finally put out those fires so damaging to Gaia our Mother?
./end sarc!!!! 😉

Yeah, that was the hue and cry back then. While those fires did damage that immediate locale, they were put out in record time. Kuwait did recovery quickly too, contrary to expectations, as did much of its environment. So, take out those damned oil well, now! Let ISIS eat sand!

Ms. Kaye.
That was a good one. But if I have a yearning for parody, I’ll try the Onion.
When do we get to the part where you yell “April Fool’s Day”?
Or will you go full high school sophomore and say “Just kidding”?

We can thank Twain for this:
“The only difference between reality and fiction is that fiction needs to be credible.”

One more entry in the “You can’t make this shit up.” category.

Obama never misses an opportunity to help ISIS. Benghazi? Gunrunning for ISIS. Convoy of US vehicles and arms from Iraq to Syria not bombed? Facilitating free movement of and provision of arms for ISIS. Oil wells and trucks not destroyed? Ensuring ISIS has the money it needs to run the caliphate and buy bullets he would deny Americans; ensuring ISIS foot soldiers have sufficient invasion money to buy bombing supplies.

If Obama took care of Americans the way he does ISIS, the demon would’ve had his face on Mt. Rushmore by now.

And because the current admin wants ISIS to take out Assad more than they want to chop the head chopping baby rapers. We armed the Islamists who machine gunned the parachuting pilots and shot down the helicopter in Syrian airspace.

Oh and Turkey wouldn’t be able to sell the black market oil. He did say he would “Stand with them” I guess he’s decided which side he’s on.