The Day the United Nations Condemned Israel and the Jewish People

The Day the United Nations Condemned Israel and the Jewish People

The U.S. and Israel Honor the Courageous Stand of Two Favorite Sons 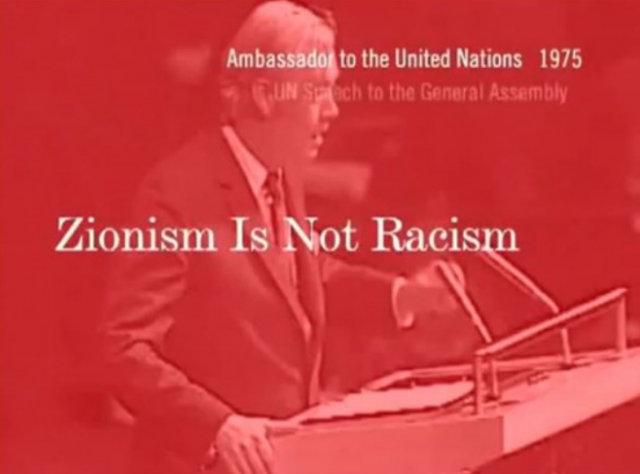 Forty years ago, on November 10, 1975, the United Nations General Assembly (UNGA) adopted resolution 3379, which declared the Jewish people’s national aspirations to live in their ancient homeland to be a form of racism.

On that day, 104 UN delegates acted shamefully. But two ambassadors—one from the United States, the other from Israel—joined together to speak the “conscience of the world” and condemn the blatant expression of bigotry.

By all accounts, they made a good tag team.

Daniel Patrick Moynihan, the U.S. Ambassador, was an Irish-Catholic who was born in Tulsa, Oklahoma but moved to New York City as a young child, growing up on the rough and tumble streets of Harlem and eventually serving in the United States Navy. 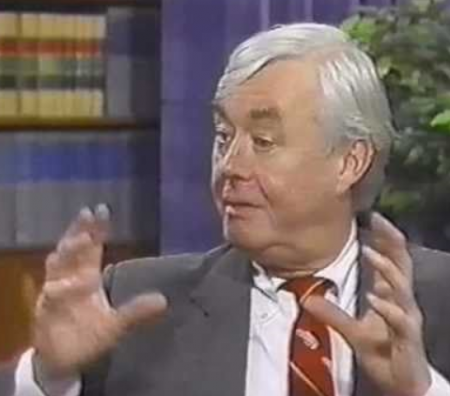 Chaim Herzog, the son of Ireland’s Chief Rabbi, was raised in Dublin but migrated to Palestine in 1935 where he fought for the Haganah, Mandatory Palestine’s Jewish paramilitary force, the British Army, and later the Israel Defense Forces.

Both of them were tough men who recognized bullying when they saw it.

This week, the UN had the opportunity to revisit Herzog and Moynihan’s historic speeches to the UNGA and their courageous stand for freedom and decency.

40th Anniversary of the “Zionism is Racism” Resolution

This past Wednesday Israel’s Permanent Mission to the United Nations, together with the American Jewish Committee (AJC) and the Chaim Herzog Public Council (also known as the Yad Chaim Herzog Association) held a special event commemorating the 40th anniversary of the historic speech by then Israeli Ambassador to the UN Chaim Herzog.

In it, Herzog denounced the world body for adopting its infamous resolution 3379.

Passed by a vote of 72 to 35 (with 32 abstentions), the resolution determined that “Zionism is a form of racism and racial discrimination”. The resolution passed with the support of the Soviet bloc and Soviet-aligned countries, and the Arab and Muslim-majority member states.

Tellingly, the vote coincided with the 37th anniversary of Kristallnacht, “Night of Broken Glass”, the devastating November 9-10, 1938 pogrom against Jews in Germany and Austria which is widely considered as an “important milestone” on the road to the Holocaust.

Along with Israel’s current Ambassador to the UN Danny Danon, speakers at last week’s event included Israel’s Prime Minister Benjamin Netanyahu (via video link), Isaac Herzog, Israel’s opposition leader and chairman of the Zionist Union party (and also son of the late Chaim Herzog), and Natan Sharansky, chair of the Jewish Agency for Israel and former Prisoner of Zion in the Soviet Union.

Secretary General Ban Ki-moon, U.S. Ambassador to the UN Samantha Power, and U.S. Secretary of State John Kerry were also on hand to mark that “dark day” in 1975.

At the event, Herzog’s speech was described by the Israeli mission and other speakers as “one of the most influential” addresses in history.

Herzog delivered an impassioned address repudiating resolution 3379 as a “shameful exhibition” that’s “dragged [the UN] to its lowest point”.

At the end of his remarks, Herzog made a “powerful impact” when he tore up the resolution on the podium before the entire UNGA, declaring

For us, the Jewish people, this resolution based on hatred, falsehood and arrogance, is devoid of any moral or legal value…this is no more than a piece of paper and we shall treat it as such” (the full text of Herzog’s speech was reprinted this week in The Jerusalem Post).

Israel Amb Herzog not only tore up UN “Zionism is racism” res, he fought against “evils of hatred & ignorance" pic.twitter.com/BihdSuuAfJ

As rightly noted on Wednesday’s event by AJC Executive Director David Harris, “Chaim Herzog memorably and eloquently deplored the insidious action, which sought to deny the Jewish people the right to self-determination and, in so doing, effectively kindled a new wave of anti-Semitism”.

But Herzog didn’t just think that the resolution was “born of a deep pervading feeling of anti-Semitism”.

He also recognized that Israel was being scapegoated by a large group of new members of the United Nations—the vast majority of them authoritarian regimes. The UN had grown from roughly 40 nations in the 1940s to 142 countries by 1975. Most of these new entrants were dictatorships that had a lot to gain from deflecting world attention away from their own despotism.

Back in 1975 Herzog told the gathering:

The resolution against Zionism was originally one condemning racism and colonialism, a subject on which we could have achieved consensus. However, instead of permitting this to happen, a group of countries, drunk with the feeling of power inherent in the automatic majority and without regard to the importance of achieving a consensus on this issue, railroaded the UN in a contemptuous maneuver by the use of the automatic majority into bracketing Zionism with the subject under discussion”.

The Battle for Zionism and Israel at the UN

On November 10, 1975 Daniel Patrick Moynihan—then serving as the American Ambassador to the UN—also delivered a magnificent and devastating speech from the same podium as did Herzog (the full transcript was published here by the non-governmental organization UN Watch).

"A great evil has been loosed upon the world." 40 years ago today, the UN declared Zionism to be "a form of racism." https://t.co/GJTEpsr76a

In his address, Moynihan thundered that

The United States rises to declare before the General Assembly of the United Nations, and before the world, that it does not acknowledge, it will not abide by, it will never acquiesce in this infamous act…A great evil has been loosed upon the world…The abomination of anti-Semitism has been given the appearance of international sanction”.

Moynihan—a “left-leaning Irish Catholic” with no particular Jewish connections—wasn’t especially pro-Israel when he arrived to his new post at the United Nations.

But Gil Troy, a professor of history at McGill University and the author of 11 books, notes that Moynihan saw the Zionism-racism charge as a “Soviet-inspired power play” to bully and humiliate the United States and the West (he called it the “Big Red Lie”). Moynihan also viewed it as an “early warning of anti-American contempt” by the Third World.

As described by Troy, Moynihan was furious for what he saw as “an attack on democracy and decency”.

At the UNGA debate on resolution 3379, he hugged Israeli Ambassador Chaim Herzog, and loudly bellowed “F*** ‘em”. According to Troy, Moynihan would later say that “I uttered an Anglo-Saxonism not found in the Talmud”.

Gil’s outstanding book, published by Oxford University Press several years ago, offers a detailed overview of the fight against the resolution, and its impact on U.S. foreign policy, American-Israeli relations, and Moynihan’s subsequent 24-year career as a U.S. Senator. 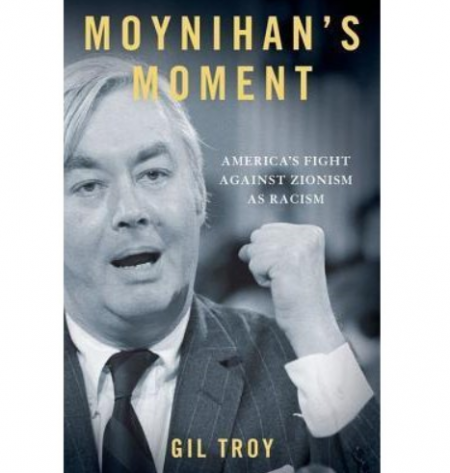 The disgraceful “Zionism is Racism” resolution was eventually revoked 16 years later on December 16, 1991—the eve of the Soviet Union’s collapse. By then, Herzog was serving as Israel’s 6th President.

Along with Herzog, its repeal took the concerted effort of many others, including two U.S. presidents (Ronald Reagan and George H. W. Bush).

But, as Troy notes in his book, it was really Moynihan who was instrumental in leading America’s efforts to mobilize support for reversing it. 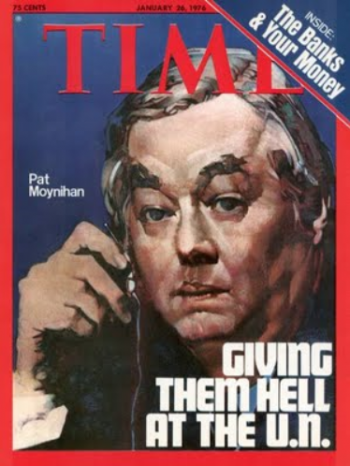 Both used their time at the rostrum to lambast the disgraceful UNGA Resolution 3379. Herzog tore it up before the seated assembly. Moynihan roared that it was a “day that will live in infamy”.

The “obscene” UNGA document was ultimately revoked in 1991. But nothing has really changed there.

The UN's “Zionism Is Racism” resolution is gone, but its spirit still stains the world: https://t.co/3yVumEjmbf pic.twitter.com/qji29a5Rdq

Today, the United Nation’s General Assembly still remains a popular forum for expressing the slander than Zionism is racism, and for the obsessive fixation on, and criticism of, Israel.

This past Wednesday, at an event marking one of the its darkest chapters, Danny Danon, Israel’s 17th Permanent Representative to the United Nations, put it well in his statement:

For sixteen shameful years, the comparison between Zionism and racism continued to be official UN policy. It was not until 1991, with another brave stand, and with the help of the United States and other allies, that the infamous resolution [3379] was finally repealed. While this act removed the hateful resolution from the books of the UN, no vote can erase the hatred from the hearts of those who seek to delegitimize the Jewish state. Forty years later, in the halls of this institution, and in the international community, we still see the same hostility towards Israel, the home of the Jewish people…Ladies and Gentlemen, it is time to eradicate the hatred of Israel by some in this institution, once and for all. It is time to restore the values of integrity and moral leadership to the parliament of nations. We must draw on the strength it took to denounce the resolution and the spirit and determination that was needed to repeal it…The challenges may have changed, but the will to stand and fight remains”. 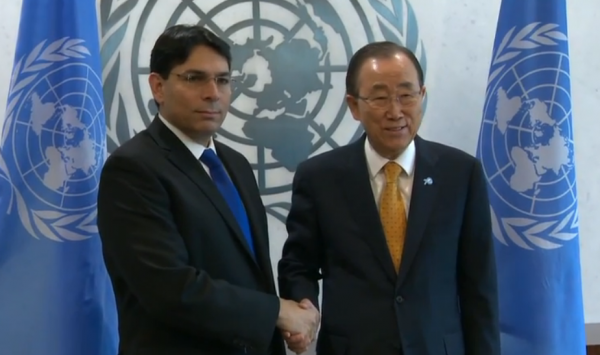 It’d be a good idea to periodically review the nations that make up the U.N.

Few among them are worthy to pass judgment on any thing or anyone:

I would like to say the UN has fallen far over the last 40 years but that would be an understatement. Other than the Korean War and some unity after 9/11 the organization has been nothing but Useless Ninnies.

Meanwhile an opinion piece in the PA’s official dailyblames the Mossad for the Paris and Beirut attacks.

Get the UN out of America and America out of the UN!