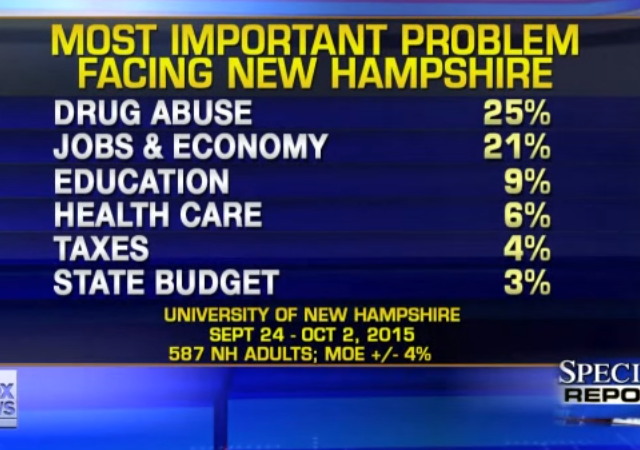 Substance abuse and addiction have always been an issue in America but these problems have never figured as largely in a Republican primary as they do now.

According to a recent poll in New Hampshire, drug addiction was the number one concern of respondents, topping even jobs and the economy.

Buddy Phaneuf, owner of New Hampshire’s largest funeral home network, has overseen burials and cremations in more than 50 heroin-related deaths this year. The average age of the decedent: 32.

Christopher Stawasz, manager of an ambulance service in Nashua, said the city set a record of 28 overdoses in September, then topped it with 37 in October. “It’s surreal,” he said. “It’s just day after day.”

Across the state, overdoses are on track to break last year’s record of 326 deaths. The pattern is so alarming that participants in an October WMUR Granite State poll ranked drug abuse as the most important issue in the 2016 presidential campaign, surpassing jobs and economy for the first time in eight years.

That is prompting a conversation in the state with the nation’s first primary that is remarkably different from prior elections in its expressions of compassion rather than condemnation.

Members of both parties have weighed in on the issue personally:

“It is the most heartbreaking thing in the world to have to go through,” said Republican presidential candidate Jeb Bush, during a New Hampshire town hall meeting in September. His daughter, Noelle, was arrested for trying to illegally buy prescription drugs and attended mandatory drug treatment.

Former Hewlett-Packard Chief Executive Carly Fiorina has opened up to voters about the hardship of losing her daughter to heroin addiction, and Sen. Ted Cruz has written about losing his half-sister to a drug overdose.

New Jersey Gov. Chris Christie, who has made substance-abuse treatment a hallmark of his campaign, often speaks of losing a law school friend to prescription pills. “I got a phone call that they found him in a hotel room with an empty bottle of Percocet and a bottle of vodka,” Mr. Christie said during an event at a New Hampshire drug-treatment facility.

Among Democrats, Hillary and Bill Clinton have both spoken emotionally about the prescription pill-related death of a 28-year-old State Department intern while she served as secretary in 2012. The Clinton Foundation has launched an initiative to cut prescription-drug deaths in half.

Ted Cruz recently spoke to Jake Tapper about his sister who died of a drug overdose in 2011. Skip to the 1:53 mark to hear the exchange.

Jeb Bush spoke to a group in New Hampshire about dealing with his daughter’s drug addiction.

Last night on Special Report with Bret Baier, the panel discussed the issue and opened with the clip of Carly Fiorina talking about losing a child to drugs.

This is a Presidential election we’re talking about. Substance abuse (and suicide, since examples like Chris Christie’s of someone found dead “in a hotel room with an empty bottle of Percocet and a bottle of vodka” sounds a lot more like a deliberate suicide than a “substance abuse” issue) are primarily social issues.

Expecting the President of the United States or the Federal Government to “Do Something!” about social issues is just begging for an embiggened Nanny State.

The drug use is closely related to the lack of economic opportunity for working class whites as well as the breakup of family structures.

Remember that when the war on poverty as unveiled in the 1960s Democrat politicians like LBJ and RFK focused on rural whites in Appalachia. Fast forward fifty years and the future prospects of those people has not improved even though they are now better feed and better housed. Much of the local industry is gone or it will be when Obama’s EPA gets his way. Indeed in terms of emotional needs many of these people are worse off now. In a region in which close knit families used to be the norm, single motherhood is is now often the rule. On top of all this, these people hear the political offspring of the architects of the Great Society speak of white privilege and endemic discrimination against black and Hispanics.

I know these people. And while the government doesn’t make them use heroin, it has certainly contributed to circumstances in which numbing the pain seems like a good idea.

No, it doesn’t help that other Federal government interventions have had unintended consequences such as throttling job growth and subsidizing “single motherhood” and the Welfare-Industrial Complex in general. Yes, the government needs to get out of the way (I’m one of those wacko-bird extremists who believes that less government intervention, not more, is the answer in almost every circumstance).

But to look at the issue of substance abuse and suicide in America and think, “this is a big problem; the government needs to fix it!”, seems to be just asking for more Big Government nanny-state intervention and micromanagement, and how often does that work out well?

That was actually a pretty good interview by Jake Tapper.

They all have some compelling stories; the real question is: what do Hillary and The Bern have to say about it, since they’re all about legalizing pot and letting drug convicts out of jail (as 0 is doing as we speak)?

I will paraphrase what Ted Cruz said in that last debate: any ONE of those people is vastly more experienced, more capable than any one of the Democrats running.

That said, Ted Cruz is by far the most conservative, principled, and proven. I’ll take Ted Cruz.

Legalize marijuana, that will help.

Most of the big issues this presidential cycle are helpful to Republicans: debt, economy, foreign relations, obamacare, etc. The wear on drugs in NOT helpful. Run, don’t walk away from this one.

Theer’s been a tremendous increase in opiate addiction because of oxycodeine.

Crackdowns on prescriptions, bit getting it and insurance reimbursements, affect people only after the fact and lead to people buying a cheaper alternative: heroin.

The heroin is imported by a certain Mexican drug gang, not related too the other ones, that carefully avoids the cities and black heroin dealers.

The antidiote to aheroin overdose should be widely available without prescription and kept in many different places.

The federal government really caused this increase in heroin addiction in places like Vermont, New Hampshire, Ohio and West Virginia.

How does the Federal government “cause” people to choose to abuse drugs?

About all the .gov could do on this is have DEA assist local le on breaking the supply chain of the worst of the stuff (NH is hammered by a version of heroin mixed with iirc fentanyl and much worse for od). Otherwise decrease the sense of hopelessness by actually getting out of way of jobs.

Drug abuse in rural America has been an under reported story for years now, probably because the casualties mostly enjoy “white privilege”. When I broke a leg a few years back I made sure the local gossip network knew I was not using any prescription painkillers. It was not uncommon for the addicted to burglarize the homes of those who are rehabbing from surgery or who have a family member with cancer to steal the drugs.

For a while there was a pipeline of illegal prescription painkillers coming out of Florida. That seems to have been replaced with Mexican heroin. I am not sure which is worse. There are more accidental overdoses with the heroin but I also know people who died too young from various conditions related to long term abuse of the pain killers.

People are going to continue to steal and murder. Maybe we should decriminalize those too. Because you know, we have too many inmates in our prison system and it makes us look bad on the world stage.

People are going to continue to steal and murder. Maybe we should decriminalize those too.

You could make the same argument in favor of retaining the 18th Amendment. I mean, the only reason alcohol prohibition didn’t work was that we just didn’t put enough people in jail!

Also, comparing the private legal use of drugs by competent consenting adults to theft and murder makes you sound a little hysterical. Just sayin’.

The NH poll surprised me. Is this a Meth or a Narcotics (heroin/pills) problem in NH? Because the Meth epidemic ravaged rural America a decade ago, to little media attention. Still does.

It can’t be Meth. The Federal government solved that problem back in 2006.

In my neck of the woods it was an abuse of prescription pain killers that morphed into an issue with Mexican heroin, which became cheaper.

I’d be more bullish on treatment if treatment had a reasonable long-term success rate.