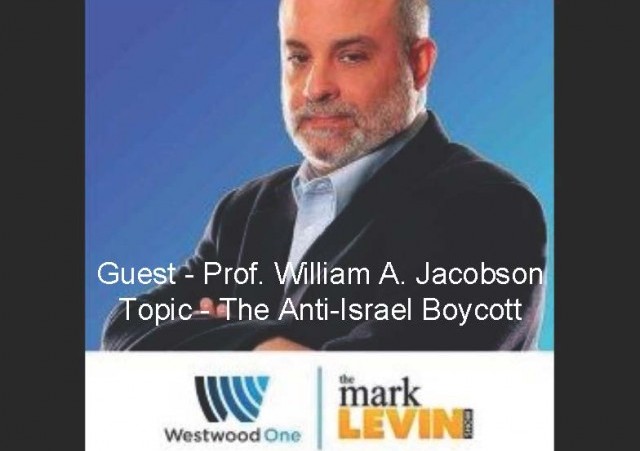 I was a guest last night on the Mark Levin Show, the 4th highest rated talk show in the country with over 7 million weekly listeners, regarding our post, ALERT: Faculty Association anti-Israel Boycott season has started.

This is the second time I have discussed the anti-Israel Boycott, Divestment and Sanctions (BDS) movement on Mark’s show. This time I discussed not just the problem, but a solution.

WAJ: “A combination of left-wing and Islamist-type professors have done at the campus level something which really is unbelievable. They’ve singled out Israel in their faculty associations, and they are trying, slowly but surely, to get more and more faculty groups to endorse the boycott of Israel, the complete academic boycott of Israel…. This season they’re really coming up to a big busy season.

WAJ: “And what’s even worse about it, is that the taxpayers are subsidizing all this, because these are all tax-exempt groups. We, in effect, are subsidizing these professors in their faculty organizations to boycott Israel….

They’re making a mockery of academic freedom. Because the American Association of University Professors, a very large group which is the one which essentially holds up the standards of academic freedom, has said that these types of boycotts violate academic freedom. Yet these professors are running wild at their own organizations passing it. Like I said, the crazy thing is we’re subsidizing it because it’s tax exempt.”

WAJ: “If there’s any congressmen listening now, there’s a very easy way to address this. Nobody has a right to be a tax-exempt organization, and there are rules in the IRS Code that prohibit certain conduct by tax-exempt organizations, such as lobbying. Even though lobbying is constitutionally protected right, it’s right in the First Amendment. Nonetheless, you don’t have a right to get a tax exemption and be a lobbyist.

Levin: “What you’re saying is right, I know that for a fact. Individual citizens can file complaints with the IRS against these organizations.”

WAJ: That’s right, and I did, and I filed one against the American Studies Association, a whistleblower complaint, almost two years ago, have heard nothing from the IRS. I don’t know if I ever will hear anything from the IRS. We submitted … a very lengthy brief on why the American Studies Association has violated the existing rules. But IRS has done nothing.

I think it’s going to take Congressional action. And I think they can do it. Because these people have the right to boycott whoever they want to boycott. They have a right to espouse whatever views they want. But they don’t have a right to a taxpayer subsidy to do it, and that’s what they’re getting now. And I don’t think they would be doing this if their tax-exempt status was on the line.”

So, if there are any Congressmen or Senators reading, or any staffers, you know what to do.

Change a few sentences in the IRS Code, and we’re done with this abuse of tax-exempt status by those who want to destroy academic freedom for everyone in order to lash out at Israel.

Well presented, Professor Jacobson. Will you ever run for office yourself?

I heard it too. Agree, superb presentation.