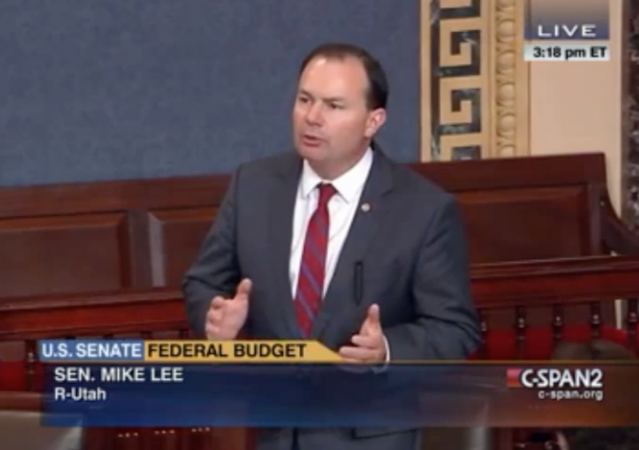 Monday afternoon, President Obama signed a two-year budget deal saying it was, “a signal of how Washington should work.”

Avoiding an election-year budget showdown, the bill suspends the debt limit until March of 2017 and brings the national debt total to a staggering $20 trillion.

According to USA Today:

Some House Republicans had proposed the former debt limit — which was set to expire Tuesday — to leverage more spending cuts from the administration.

Outgoing House speaker John Boehner, R-Ohio, put together a plan to avoid breaching the debt limit, saying that doing so would threaten the nation’s credit rating.

The bill sets the federal budget for fiscal years 2016 and 2017, with an end to spending caps that had affected both national defense and domestic programs.

“By locking in two years of funding,” Obama said, “it should finally free us from the cycle of shutdown threats and last-minute fixes. It allows us to, therefore, plan for the future.”

The two-year budget deal was passed by the Senate Friday with a vote of 64-35. All 35 dissenting votes were Republican.

Several Senate Republicans vocally opposed the budget deal which essentially robs the Social Security Trust Fund of about $150 billion. Senator Lee referred to the bill as, “the last gasping breath of a disgraced bipartisan Beltway establishment on the verge of collapse.”

“The bill is a product of an unfair, dysfunctional, and fundamentally undemocratic process, a process that is virtually indistinguishable from what we promised the American people a GOP-controlled Congress would bring to an end. We made that promise, precisely because negotiating legislation behind closed doors without input from a majority of members and then rushing it through for final passage without debate or opportunity for amendments violates our party’s core principles. It also inevitably leads to bad policy.

Many proponents of the bill say, well, the bill isn’t perfect, but while it isn’t perfect, it does include some meaningful entitlement reforms. The sales pitch we hear most often alleges this budget deal will save the Social Security Trust Fund from insolvency. But, we’re never told exactly how this bill would do this.” 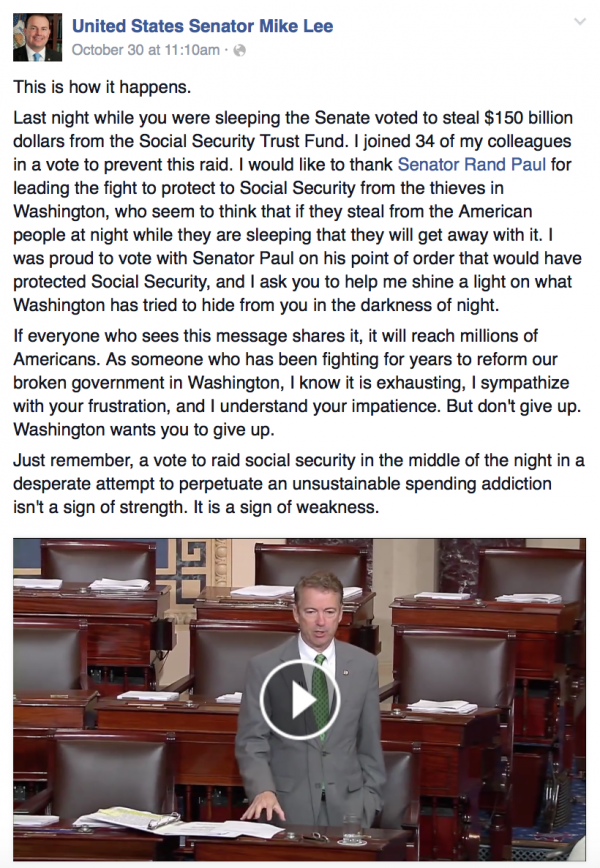 His post contained the following video of Senator Paul:

At the time this post was published, Sen. Lee’s post had been shared well over one million times. Interest in Lee’s sentiments mirror polling released by Rasmussen Monday indicating voters don’t believe politicians want to cut spending, nor will they honor voter wishes do to so.

I believe there is only one possible solution to the run-away Federal Government. We must call an Article V Convention of States to amend the constitution. DC will never fix itself.

That “cure” is worse than the disease. There is absolutely no telling what a convention might come up with. With all its flaws, we have a relatively good constitution; if we reroll the dice the chance is much higher that we’ll end up with something worse rather than something better. For one thing, any new constitution the convention writes is unlikely protect the right to bear arms, or have anything like the protection that speech currently gets.

And there is nothing that can be done to stop it. The Philadelphia convention set the precendent, and the next convention can take full advantage. Any decisions it makes will be ratified by a process that it will determine, just as happened last time. Don’t let that genie out of the bottle.

Nope. None of that.

What you describe is euphemistically called a “runaway convention” but it is an impossibility. Since the convention is limited to PROPOSING amendments for presentation to the states, its commission (authority) terminates once the amendments are proposed. If the proposed amendments are never approved by the appropriate number of states, then they die. Some could be approved and some could be disapproved. Each one would have to relate to the authorization resolution passed by the appropriate number of state legislatures; that is the scope of the convention. It is not a blanket/infinite commission to go anywhere it wishes.

You may think the constitution is fine the way it is and I would argue that you have the history of a couple of centuries down to a couple of decades which support your premise. But implying that merely having the debate in the various legislatures is somehow an ominous portent is just silly.

The Framers put the provision in the constitution for our use and benefit, not to scare the living daylights out of us.

There is an easy counterargument to your claim. First, the original Constitution was written by an out of control convention to “fix” the articles of confederation, not to write a brand new Constitution. Second, how do you prevent a majority of the delegates from writing a new Constitution as a single amendment. You can’t.

I see your out of control convention and raise you one out of control Congress and WH. Pick your poison.
So what if they write a new Constitution? If it sucks, it just gets done again.

Let me guess though, you’re one of those cowards that wants to pretend further inaction and further surrendering is the ‘smart choice’.

Lots of words there. Your only message, though, was that you are a coward.

In the RINO world, failure to block is an “accomplishment.”

Some good analysis, including the conclusion that the T=rump Frankenstein monster is the creation of the GOP.

For the record, the RINOs who voted with the democrats on this were:

Snopercod, you should have called them Undocumented Democrats rather than Rino’s.

Thom Tillis (R-NC)… I f**king knew it, knew he’d be on that list. He’s a Senate version of the House’s Renee Wellmers (R-NC), all conservativey – until elected.

Let’s not call them undocumented Democrats. They’ve done enough to be documented, stamped, tattooed and branded, as either Dems or traitors. Take your pick. They both mean the same thing.