The perfect choice for Obama’s America. 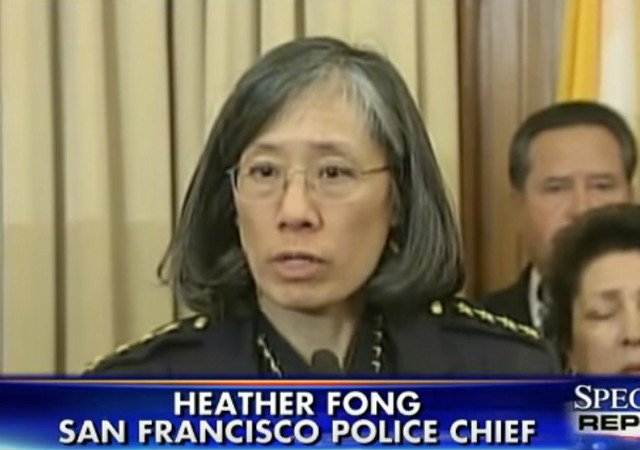 At a time when a growing number of Americans are becoming more concerned about illegal immigration and border security, wouldn’t it make perfect sense for the government to put a sanctuary city advocate in charge of our border?

When we told them we we care about jobs and the economy, they gave us Obamacare. When we expressed concern about terrorism, they told us climate change was a bigger threat.

Naturally, our concerns about immigration warrant a border chief who doesn’t believe in enforcing immigration law.

Sources: Vocal supporter of sanctuary cities on short list to be next head of Border Patrol

A former San Francisco police chief and vocal supporter of a sanctuary cities policy is on a short list of candidates to become the new chief of the Border Patrol, according to sources.

“If they bring (a police chief) in for political purposes based on the sanctuary cities model, that politicizes the job and I think it completely undermines credibility and morale in the organization,” House Committee on Homeland Security Chairman Mike McCaul, R-Texas, told Fox News.

“If you have someone who is advocating for sanctuary cities, that’s the opposite side. They welcome these illegal immigrants to stay in the country. And so I think it’s at cross-purpose with the mission itself.”

Fong, according to Border Patrol, DHS and Capitol Hill sources, is one of several candidates to replace current chief Mike Fischer, who announced his resignation last month.

Here’s a video from Special Report with Bret Baier:

Fong currently serves at the Department of Homeland Security as the Assistant Secretary for State and Local Law Enforcement.

Since leaving the San Francisco police department, she has also been receiving two considerable pensions which have been the subject of some controversy.

While former Police Chief Heather Fong was about as far from universally popular as you can get, few would question her work ethic.

And yet, no matter how diligently the former chief performed her duties, it’s hard not to drop one’s jaw at the size of the gargantuan lifetime pension payments Fong is earning as a 53-year-old retiree. That was the gist of a story in today’s Chronicle, which claimed the ex-chief is drawing an annual pension of $229,500.

Well, get ready to drop your jaw a little bit more, because the aforementioned number is not accurate. It’s too low. By plenty.

According to the San Francisco Employee Retirement System (SFERS), Fong actually earns two city pensions: One of $566 per month for her (brief) time as a miscellaneous-class employee and a second of $22,572 per month for her 30-plus years as a safety worker. Doing the simple math that’s $23,138 per month or $277,656 per year.

Retiring at 53 for over a quarter million a year?

Nice work if you can get it.

Is this position one wherein the nomination must be approved by the Senate? If so, I’d like to wager $100 that McConnell and his band of merry moderates roll over and approve her by a margin of 2:1.

Maybe even more… she is a threefer. Asian, female and gay.

So much for the oppressed minorities.

With few exceptions, the private sector doesn’t have pensions anymore. If Social Security and a 401K with 3% company match is good enough for producers in our society, why isn’t it enough for our servants? Fix it. Fix it now.

You have to realize the public sector unions in California pay for the elections, and after that, reward themselves. This has been going on for many decades. The Repubs aren’t going to do a thing about it, because California is a one-party state, and has been so for decades. It is all very incestuous.

An over-quarter-million-dollar pension is a money laundering scheme in support of Collectivist pols.

And, NO! I did NOT suggest anything about a Chinese laundry. Stop that!

No problem. The Republican Senate will block…

California is by far the largest employer in that State, and the practice of double-dipping is both common and encouraged.

Liberal Peter Principle at work. Or how the libs destroy things which are supposed to keep citizens safe in order to pander to invaders.

I think it is interesting that Ms. Fong retired, and then went to work for the Feds. It’s obvious that the sanctuary city policy has worn out its welcome, even in San Francisco.

Ross Mirkarimi just got defeated in his bid for re-election, and his support of sanctuary city policies, like that of the former police chief Fong, are very unpopular.

My theory is that the citizens of San Francisco were sold a bill of goods. The sanctuary city policy was supposed to be compassionate toward people who just come here to work, but in application, it turned into a get-out-of-jail-free card for violent criminals.

Jeez! These XY chromosome chicks are everywhere! When Obama leaves office, the incoming GOP president is going to have to fire everyone hired in any office for the past 30 years. That’s the only way to get rid of the open border, terrorist symp, America-hating twits hired in the past eight years,

Just more of the same from the Obama administration!
Lets see how much more damage we can do before our term runs out?