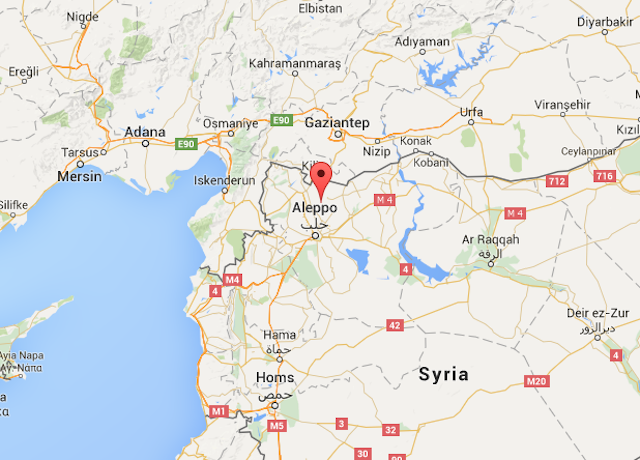 The Organization for the Prohibition of Chemical Weapons (OPCW) has concluded that mustard gas was used during a late-August attack on the Syrian town of Marea. The chemical weapon was detected during a battle between Islamic State insurgents and rebel fighters just north of the ISIS stronghold in Aleppo. OPCW’s confidential report (the media was given a peek at a summary) shows that at least two people were exposed to “sulfur mustard.”

What officials don’t know is which side unleashed it.

“It is very likely that the effects of sulfur mustard resulted in the death of a baby,” it said.

The findings provide the first official confirmation of use of sulfur mustard, commonly known as mustard gas, in Syria since it agreed to destroy its chemical weapons stockpile, which included sulfur mustard.

The report did not mention Islamic State, as the fact-finding mission was not mandated to assign blame, but diplomatic sources said the chemical had been used in the clashes between Islamic State and another rebel group taking place in the town at the time.

“It raises the major question of where the sulfur mustard came from,” one source said. “Either they (IS) gained the ability to make it themselves, or it may have come from an undeclared stockpile overtaken by IS. Both are worrying options.”

It’s a fair question. Syria supposedly rid itself of its entire chemical weapons program back in September of 2013 amid uproar following the deaths of hundreds of people in a sarin gas attack outside of Damascus. The purging was to have been completed over a year ago—but this is Assad we’re talking about. International officials and activists have long suspected that Assad squirreled away part of his chemical weapons stockpile, which contained large amounts of mustard gas.

According to Reuters, the Syrian government has accused insurgent forces of using chemical weapons against the military, but those reports remain unsubstantiated.

Meanwhile, the US and allied forces have agreed to increase aid to rebel forces countering the influence of Assad’s Russian- and Iranian-backed push to power. The aid will include shipments of weapons and other supplies.

The deliveries from the Central Intelligence Agency, Saudi Arabia and other allied spy services deepen the fight between the forces battling in Syria, despite President Barack Obama’s public pledge to not let the conflict become a U.S.-Russia proxy war.

U.S. officials said the Obama administration is pursuing what amounts to a dual-track strategy, which aims to maintain military pressure on Mr. Assad and his Russian and Iranian supporters while U.S. diplomats see if they can ease him from power through negotiations. U.S. officials said the pressure track was meant to complement the diplomatic track by giving the U.S. leverage at the negotiating table.

Saudi and Turkish officials say the level of U.S. support for rebel groups remains insufficient, despite the latest U.S. promise to do more. Pledges to expand the weapons pipeline came as Washington sought support from Saudi Arabia, Turkey and other allies in the region for a new diplomatic track that includes Russia and Iran, diplomats in the region said.

The US has made a point to emphasize the divide between Assad’s trifecta, and the rest of the world. Officials say that their goal is to direct all of their efforts into defeating ISIS, and not into a proxy war between the US and Russia:

US officials have rejected demands from both the Saudis and the Turks to keep the flow of weapons coming; the Saudis have also repeatedly asked that the US not back down from demands that Assad leave office at the end of a transition period.

I hope ISIS tries to make mustard gas. Muslims are careless and sloppy. They more often than not inflict their stuff on themselves. God willing.

” I hope ISIS tries to make mustard gas. Muslims are careless and sloppy.”

makes me wonder if Bill Ayers was muslim

He might as well be. He basically stands for everything Islamists do.

I recall there was speculation that Saddam Hussein transferred his chemical stockpiles to Syria.

An Iraqi Air Force General clearly stated the Russians moved truck loads of WMD to Syria, but the media was so anti Bush because their meme of Bush Lied soldiers died they could not be honest or investigative about this report.

Georges Sada even wrote a book about it, in english.

And yet the obit for Ahmad Chalabi this week failed to mention any of that, preferring to call him a liar, and in loving detail, lay out the controversy over whether Saddam had WMD or not.

While researching the chemical makeup of the various forms of mustard gas, I read that 64 million pounds of mustard and nerve agents were dumped into the ocean off the US east coast after WWII. Location records lost. Still there. Yikes.

It would’ve been burnt before it was dumped which probably would’ve destroyed the agents. Similar to other dumps of agents. However, the USG has spent millions upon millions of dollars buying back property and destroying chemical munitions that were thought to have been disposed of properly so who really knows.

So ISIS or another rebel group already used mustard gas in a battle between them but we’re assuming Assad. Because. Mustard gas is not hard to make. Others in the same town were already using it. But we’re blaming Assad.

He’s winning. He has the Russians on his side throwing lead downrange at the bad guys. Head choppers and baby rapers of all rebel bent are being pushed back but he’s going to risk starting something now.

Why don’t we assume it’s the side that sells children into sex slavery, chops off infant’s heads, and throws gays off of roofs that is using the mustard gas now. Since at least for now they’re using it on each other anyway.

We really need to know.

The more urgent ‘need to know’ is that Obama has turned US troops on Americans.
http://radio.foxnews.com/2015/07/17/texas-governor-president-obama-to-blame-for-jade-helm-15-hysteria/

“That’s pretty sophisticated for a bunch of halfassed mountain boys”

With non-combatant dead bodies all but being stacked as cord wood in this conflict zone; pointing at one of a hundred and shacking a finger and crying chemical weapons foul seems pointless to me.