This just might have something to do with teachers unions. 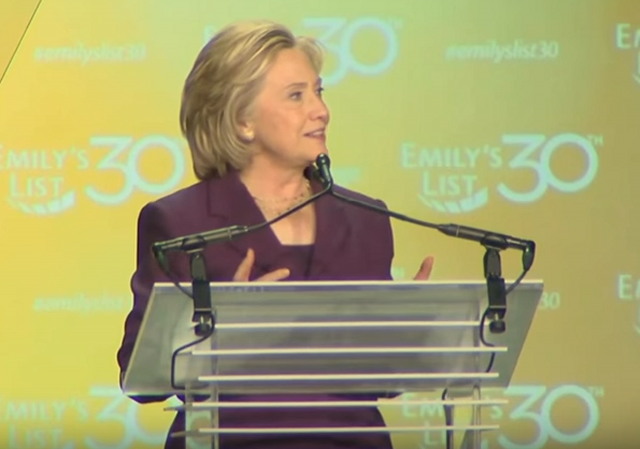 Hillary Clinton has changed her mind on the trade deal and gay marriage, but she’s not finished flip flopping.

During her husband’s presidency, Hillary Clinton was a big fan of charter schools. Now that she’s seeking the presidency herself, things have changed.

Former Secretary of State Hillary Clinton sounded less like a decades-long supporter of charter schools over the weekend and more like a teachers union president when she argued that most of these schools “don’t take the hardest-to-teach kids, or, if they do, they don’t keep them.”

Her comments in South Carolina came straight from charter school critics’ playbook and distanced her from the legacies of her husband, former President Bill Clinton — credited with creating a federal stream of money to launch charters around the country — and President Barack Obama, whose administration has dangled federal incentives to push states to become more charter friendly.

Then we come to the heart of the issue.

Teachers unions have been early and enthusiastic supporters of Clinton. American Federation of Teachers President Randi Weingarten, a noted opponent of many education reform efforts, is a longtime friend and informal adviser to her campaign. Unions say they aren’t anti-charter but often attack the schools, a majority of which employ teachers who aren’t unionized, accusing them of siphoning off money from traditional public schools.

Hillary, like Obama, enjoys the support of teachers unions and we all know how they feel about charter schools.

This editorial from the New York Post has more:

Whoosh! There goes Hillary Clinton, hurt­ling leftward after another 180-degree cartwheel on a critical issue — this time, a flip-flop on charter schools.

Charters once had no greater fan. Back in 1996, Clinton hailed them as being “freed from regulations that stifle innovation, so they can focus on getting results.”

But the two national teachers unions — the National Education Association and the American Federation of Teachers — were first to endorse her latest presidential run.

So now Clinton’s script on charters might as well be written by AFT President Randi Weingarten (an informal campaign adviser).

Asked about charters at a recent town hall, Clinton said she’d backed them for 30 years — then added that now she sees problems.

“Most charter schools,” she said, “they don’t take the hardest-to-teach kids, or, if they do, they don’t keep them.”

That claim is utterly false — and right out of the union playbook.

Democrats claim to believe in choice.

As long as it isn’t school choice.

Is this really a surprise?

“During her husband’s presidency, Hillary Clinton was a big fan of charter schools. Now that she’s seeking the presidency herself, things have changed.?”

No, no no…this is all wrong. Democrats don’t flip flop, Republicans do. Democrats become enlightened and evolve. /s

Seriously, the only “choice” Collectivists want is death. They’re all about killing the unborn on one end, and killing the aged on the other end of the spectrum, with killing off as many ‘evil’ humans as possible in the middle for the environment, donchaknow?

Conservatives like people to have choices, and we like markets exposed to market forces instead of Collectivist monopoly.

The Collectivists will always protect childish adults (and their votes) and never our children.

Bob Dole campaigned against the teachers’ unions in 1996 – but maybe he didn’t emphasize it enough. I think more people are aware now, anyway. and at that time it was school vouchers – now there are also “charter schools” and there’s more experience with them too.

School choice is a huge Democratic wedge issue, for millions of mostly reliable Democratic voters are alarmed and disgusted with the low quality schools available to their children yet Democratic politicians must weigh their votes against the serious money and phone-bank support that’s always available from the teachers’ unions. Perhaps few of these voters may be willing to vote Republican, but, they also may choose to stay home on election day.

It’s no surprise that Hillary! chose the unions, for she’s not exactly a populist. She intends to coast into the White House with the support of big-money donors (Soros, Big Entertainment, public-sector unions) along with the support of voters who couldn’t stand to look at themselves if they were to ever vote Republican, plus identity-group support (an automatic ten-point boost just for being female?), and mostly reliable mainstream press support.

And, although she seems the least gifted national politician in at least a generation (can you think of any politician with such obvious contempt for ordinary Americans, or with so little talent to engage a crowd?) she still stands a good chance to win: just add up the numbers of autopilot supporters and she already has close to 50% of the popular vote.

It. Doesn’t. Matter. She could be caught with a dead boy or a live girl (hi Vince and Huma) and she will still get the Dem nomination. She will still until the day she cheats her way in or loses in a nasty contested election have the media shill for her.

Benghazi? Nope nothing there. So many Top Secret violations she should be doing consecutive life sentences until the sun burns out? Nope didn’t happen. The TPTB don’t even pretend this is a free or fair country any more.

Don’t want to get killed? Get dragged through court as a murderer for protecting yourself. Don’t agree with the narrative? Have paid thugs come and ‘protest’ in your town until you can’t get arson insurance by Lloyd’s of London. Don’t bake a cake to celebrate sin or marry two perverts? Go. To. Jail. And they’ll send guys with guns to take you there.

She could insist we feed kids into woodchippers before school starts and the media would cover for her or even find being fed into a wood chipper to be good for childhood development.