PSA: Ladies of “The View” to Stop Apologizing for Being the Ladies of The View

PSA: Ladies of “The View” to Stop Apologizing for Being the Ladies of The View

We have “freedom of speech until you say something that offends somebody.” 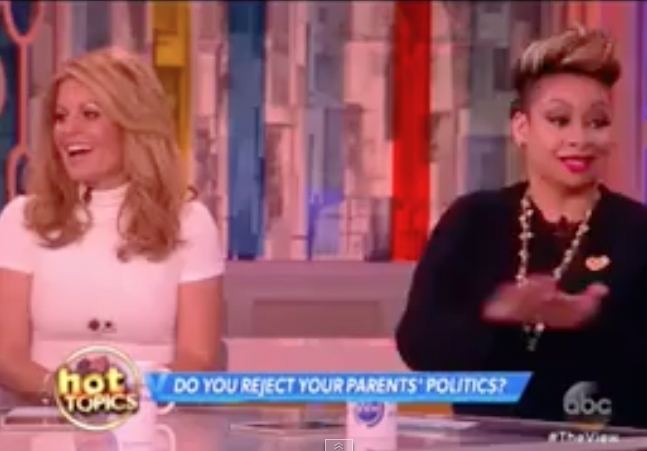 The ladies of The View have a lot of problems with you people—and most of them center around the problems that you people have with The View.

The panel is no stranger to controversy, which makes sense considering they spend a great deal of time launching bunker busters at people who don’t even have daytime talk shows on their radar. The show has caused its share of freakouts—and they’ve become increasingly adept at apologizing for them. Last week, Joy Behar waxed innocent on outrage culture when she said, “One of my friends said to me yesterday, ‘The View’ has become, ‘We didn’t really mean it! We’re sorry! We didn’t mean to say it like that!’ We need to stop saying that.” Co-host Raven Symone lamented that it feels like we have freedom of speech “until you say something that offends somebody.”

The funny thing with The View is, their own viewer demographic tends to turn on them at every opportunity. See here. And here. And who could forget this this piece of insanity?

So sure, ladies—you have a lot to worry about, and it’s mostly your fault.

Case in point: during the same episode last week, new host Candace Cameron Bure tripped over her own tongue in a panic to evacuate a minefield of political correctness.

I’d say the panic was needless, but this is a nationally-distributed talk show in 2015, so her reaction was actually pretty mindful of the times. Watch:

More from The Wrap:

The show’s penchant for stirring up controversy and then quickly apologizing for it reared itself again when new co-host Candace Cameron Bure had a moment of panic after realizing something she said could possibly be taken the wrong way.

It came during a discussion in the show’s Hot Topics segment on how kids inherit political views from their parents, when Bure explained how she naturally leaned toward a Republican point of view, even at a young age.

“I know that was because of my upbringing, and the way that our values and morals were brought up in our household we veered — not to say that Democrats aren’t moral or anything like that!” she said, quickly clarifying her statements as her liberal co-hosts assured her that they were “quite moral.”

“You get so nervous because everybody writes in and it’s like you can’t say one thing without people being offended. It’s so hard,” Bure said.

My use of Wrap’s coverage of this non-gaffe was intentional. I really like how—and this could have been completely unintentional, so bear with me—the author worded it:

Candace Cameron Bure had a moment of panic after realizing something she said could possibly be taken the wrong way.

This is where we’re at. Right there, at the corner of, “Eggshell Plaintiff” and “Oh God, Please Don’t Fire Me for What I Just Said.”

In 2015, we’re no longer worried about saying some offensive, or racist, or sexist, or generally degrading about another group of human beings; what we’re worried about is the perception of an increasingly sensitive, increasingly breakable, and increasingly hostile group of society-watchers (Media Matters ain’t got nothin’ on Tumblr, people) who actively seek out things that could be interpreted as offensive to a carefully curated, ad hoc class of people, represented by professional (or close to it) “activists.”

In this clip, Candace Cameron said absolutely nothing to suggest that Democrats are immoral; she simply brought up the completely recognizable and wholly observable fact that Republicans in general tend to have a differently-calibrated moral compass. Anyone who has ever been friends with someone at the opposite end of the spectrum knows this to be true: Republicans put emphasis on preserving and protecting tradition, for example, while Democrats see no need to do so if it means a step toward “inclusiveness,” even at the expense of another belief system; Republicans might worry about the long-term effects of a new entitlement program, while Democrats are more concerned about the here-and-now problems associated with things like poverty or teen pregnancy.

We’re both fixers. We’re both doers. We just use a different flowchart to get there; I’d argue that the Republican flowchart is a better path to success, and hey, that’s what we have debates (and the comments section) for.

The problem is, by and large, shows like The View create the very atmosphere that leads to this nonsense—and now they’re feeling the crushing blow of the SJW Frankenstein they’ve created.

ARE there ladies on “The View”?

Caitlyn Jenner is more of a lady than Joy Behar.

An autoplay video of “The View”? Srsly?

No, Rags. No ladies on the “V”, tho to be honest I’ve never watched it (see all I need online). No more respect for little Candy, either. I read the transcript where she couldn’t even come CLOSE to defending Christianity during an exchange with Whoopi, who INSISTED that Hitler was Christian. For you who might be wondering, Hitler was NOT a Christian.

Anyone dumb enough to watch this gaggle of stupid old crones cackling away daily is probably an Obama voter, and may just tune in for the set’s background color.

More like ladies of the evening. They would make excellent residents of the Bunny Ranch.

Aside from Cameron (who I didn’t know was on the show), if the rest of that bunch were residents of the Bunny Ranch, the place would have to have a new slogan.

“Where boners go to die”

Stupid yentas, all of them. One is dumber than the next.