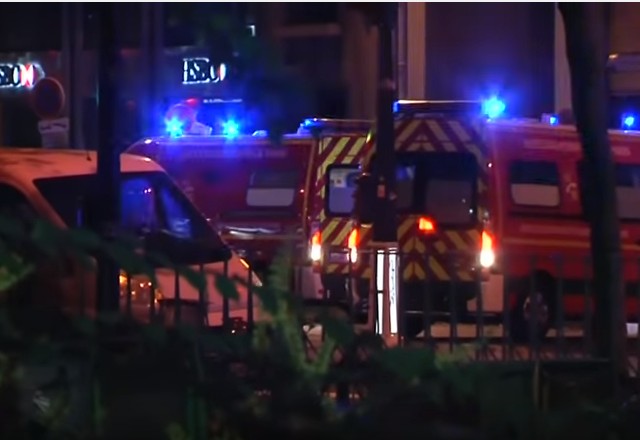 French Interior Minister: We will start the "dissolution of mosques where hate is preached." https://t.co/BZwXLnBnp3 pic.twitter.com/sZ7JIvVPp9

Speaking to a joint session of Parliament Monday, French President Hollande declared, “France is at War.” He encouraged Members of Parliament to extend the country’s state of emergency for another three months. Calling the Paris attacks, “acts of war,” Hollande the murderous acts represented an attack of aggression, “against our country, against its values, against its youth, and against its way of life.”

Hollande’s speech is here (in English) and is worth a listen:

Declaring that “France is at war,” President Francois Hollande on Monday proposed sweeping new laws and more spending on public safety in response to Friday’s terror attacks in Paris — promising to eradicate terrorism, but not at the expense of France’s freedom.

A suspect in the Paris attacks have been in ISIS propaganda

European officials have identified Abdelhamid Abaaoud, a Belgian man whose parents are from Morocco, as a key suspect in last week’s coordinated terrorist attacks in Paris. Abaaoud has been featured by the Islamic State in its propaganda for plotting terrorist attacks in Europe in the past.

French authorities say Abaaoud is “the presumed mastermind” of the coordinated assault, according to the Associated Press. And he is also thought to have been involved in earlier plots targeting France, the AP reports, including an attack on a Paris-bound train in August and another on a church in the suburbs of Paris.

Abaaoud has not kept a low profile despite his suspected involvement in plots against the West. The Islamic State interviewed Abaaoud in Dabiq 7, the seventh issue of its English-language magazine, which was released in February 2015. The cover of Dabiq 7 mocked Muslims who stood in unity with France over al Qaeda’s attack on the offices of Charlie Hebdo in Paris.

Dabiq described Abaaoud as “a mujahid being pursued by Western Intelligence agencies for his jihad in Belgium.” Two members of Abaaoud’s cell were killed in a shootout with Belgian police during a raid on their safe house in Verviers on Jan. 15, just one week after the massacre at Charlie Hebdo’s offices.

23 people were arrested and 104 others were held for questioning. From NBC News:

French police launched dozens of raids overnight as part of a colossal manhunt following the deadly terrorist attacks in Paris.

Prime Minister Manuel Valls told the RTL radio more than 150 raids were carried out across the country.

“We are at war with terrorism,” he told the station. “The terrorists can strike again.”

Interior Minister Bernard Cazeneuve said that 23 people had been arrested — while 104 others detained for questioning — over a 48-hour period. He added that guns, bulletproof vests and even a rocket launcher had been seized.

“This is just the beginning,” Cazeneuve said. “The response of France will be total. Those who attack France, we will catch them and we will be unrelenting with them … Terrorists will never destroy the Republic, because the Republic will destroy them.”

A total of 168 raids took place throughout the country, including some in the cities of Toulouse, Grenoble, Bobigny and Lyon.

The BBC has a great article detailing the lives of individuals who were murdered Friday. France24 also covered the victims:

Mother of suspected jihadi says her son, “may have been stressed.”

“He didn’t mean to kill anyone,” says suicide bomber’s family. I’m going to have to disagree here. The Independent writes:

The mother of one of the Paris suicide bombers has claimed her son “did not mean to kill anyone”, adding that he may have blown himself up because of stress.

Brahim Abdeslam, 31, detonated a suicide vest outside the Comptoir Voltaire café, yards from the Bataclan concert hall where more than 80 people died on Friday night.

Abdeslam was one of three brothers from Belgium suspected of being linked to the attacks which killed 129 people.

Salah Abdeslam, 26, became France’s most wanted man after being stopped and let go by police.

The third brother, Mohamed Abdeslam, a former council worker, was arrested in Molenbeek in western Brussels, a day after the attacks in the French capital.

“He added that guns, bulletproof vests and even a rocket launcher had been seized.”

So do they step up attacks or put them off till later when things calm down. We’ll see tomorrow, or not.

This is some sort of role-reversal. We used to insult the French for being ridiculously passive, and the USA was mocked for being overly aggressive. Is it too late for French President Hollande to join the Democratic party and run against Bernie and Hillary? The whole citizenship and birth place really don’t matter to the media or the general populace anyways.

“The mother of one of the Paris suicide bombers has claimed her son “did not mean to kill anyone”, adding that he may have blown himself up because of stress.”

Actually, he was just turning his life around. He had stopped using drugs and enrolled in courses at the local community college. He had even applied for some jobs. He had joined a gym and was starting to workout. His hope was to be a something or other.

Will we be monitoring our radical mosques, funded by the Friends of Bush, the Saudis?

Your second paragraph should have sarcasm markers. (If it wasn’t sarcasm it was has ridiculous as his mother’s comments.)

Or did you actually mean to say that you aren’t familiar with the meme?

Almost invariably when a “Dindu Nuffin” gets killed perpetrating robbery, home invasion, attempted rape, or some other violent felony, the family protests that “…Alphbetavious was just turning his life around. He had stopped using drugs and enrolled in courses at the local community college.etc., etc., etc.”

I am tired of hearing about this being a war against “terrorism.”

BS. It is a war against the Daesh, BECAUSE they use terrorist methods to get their way.

Exactly. And they shouldn’t get their way, period, no matter what methods they use because their goals are incompatible with our civilization.

Daesh is just one manifestation; it is in reality a war against the whole of Islamic Supremacism. When Mohamed (Blasted be his name) started out he was selling his garbage as a religion, but that soon changed. He changed it into a military/political organization with a complete set of civil and criminal laws (sharia); the religion became nothing more than a small ancillary attachment. This, the real Islam, has been at war with the civilized world since that time 1400 years ago!

As far as the “religion of peace” thing is concerned, look up the Islamic concept of abrogation, wherein anything Mohamed said that contradicted any earlier pronouncement totally invalidated the earlier. If you study the Qu’ran you’ll see that all of the early, peaceful suras have been totally invalidated, as if they never existed at all!

Al-Queda, Daesh, Hamas, Jamaat-ul-Mujahideen Bangladesh, and all the rest of the Islamic Supremacist groups are openly at war with the civilized world; we must recognize that if we are to have any hope of prevailing.

Ultimately this is a war against normative Islam because it is the inspiration for all muslim terrorist groups. It is also responsible for Wahhabism which is a dogs hair away from being a terrorist outfit. Even if we defeat ISIS another group will take its place and it will have the same beliefs, goals and methods. It’s probably not possible to change islam because of its hard internal rules which declare normative Islam to be the perfect religion and demands death for any deviation. We could end up in a fight to the death with all of islam. We did defeat political/military Shintoism which has many similarities with normative Islam, but it took a couple of nuclear weapons to do it.

A French socialist gets it.

Our socialist? Not so much…