Not even MSNBC knows what the hell just happened at Mizzou

Not even MSNBC knows what the hell just happened at Mizzou 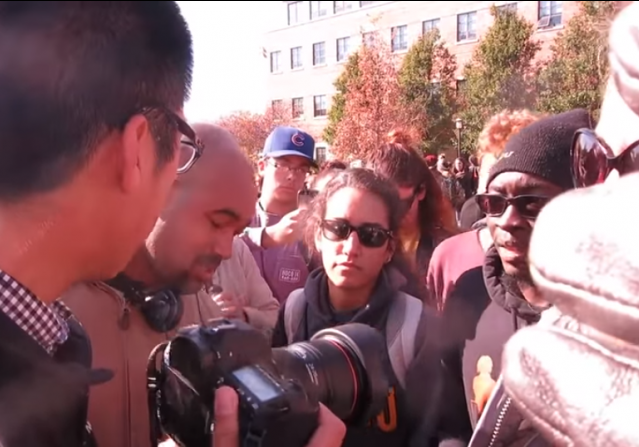 On this morning’s episode of Morning Joe, Joe Scarborough and his fellow panelists dove deep into the University of Missouri race controversy, focusing on the forced resignations of university president Tom Wolfe and chancellor R. Bowen Loftin. During the discussion, Scarborough did the unthinkable, and asked the question we’ve all been pondering since this story broke: what did these men do to deserve this?

Scarborough’s point was fair—the media hasn’t uncovered or reported a single piece of evidence to suggest that either man turned a blind eye to complaints of harassment or abuse—but the panel, in true MSNBC panel fashion, proceeded to give him a lecture in Sensitivity 101.

“Students have the right to protest, obviously,” he continued, saying, “I think what concerns me the most is the powerful of college sports… once the football team said they weren’t going to play Saturday, the hell with due process.”

The Washington Post’s Eugene Robinson offered, “There are a lot of African-American students and other minorities who feel for whatever reason that the campus was not made to be a friendly, accepting, and supportive place.”

“But what are those reasons? What are the specifics? I’ve been reading since this photograph was taken, looking for specifics of systemic actions that have made students feel exclusive,” said Scarborough. The photograph that Scarborough referenced features the entire Mizzou football team locked arm-in-arm that was Tweeted from head coach Gary Pinkel.

“I don’t know what those specifics are,” admitted Robinson.

We’re so far down the rabbit hole with these “racial incidences” that Joe “Mainstream Liberal Media” Scarborough is the only sane man in the room. During the entirety of this eight minute segment, we hear multiple panelists making every excuse in the book for these student “protesters” without ever actually demanding an answer.

At around the 4 minute mark, Scarborough and his guests fall down the “there has to be more to this” rabbit hole, and again, Scarborough’s expression tells me that he feels like he’s losing his mind. Why did the president and the chancellor resign if not even the media can articulate what did or did not happen to the students who complained about race-based aggression on campus?

WaPo’s Eugene Robertson isn’t particularly interested in the answer to that question; instead, he focuses on defending the idea of these protests. Finally, Scarborough broke:

“Isn’t that troubling Gene, that you don’t know? A Pulitzer Prize winner? This guy is run out as President of the University because the football team said ‘we’re not gonna play’. And neither you nor I reading these articles know what he did to invoke this type of response. Is this a complete failure on the national media to report?”

(What’s more troubling is that Gene doesn’t really seem to care; he’s happy to 1) take the students’ word for it, and 2) leave it at that.)

What happened to these people? Shouldn’t we be investigating this? No, no, no! To investigate is to question, and to question is to perpetrate another microaggression on students who apparently will settle for nothing less than heads on the platter.

This should terrify you.

Universities are a haven for mentally ill malcontents, mob rule and vigilante justice.

… and you get to learn Marxist sloganeering for 50K a year.

I can absolutely, positively GUARANTEE you that, if I get you on the witness stand to question you about total bullshit you are FANTASIZING about…like these “students”…you WILL be feeling “unsafe”.

It won’t be no “micro-aggression”. You’ll be “MEGA-aggressed”.

The radical Abbie Hoffman once said that the most dangerous thing he was given was a classic, liberal education — it taught him how to think and how to argue.

The girl-child at Yale is not receiving the education that Mr. Hoffman received, nor does she appear to be receptive to understanding the implications of such an education. Ditto for the students at Mizzou who are “protesting” — protesting something, who knows what.

The girl-child at Yale is a skinless person in a sandpaper world. Ditto the students at Mizzou. The world will always be sandpaper. I’d advise the girl-child to return to her dorm room, pull on a robe, and bury herself under her pillow under such time as her parents can marry her off safely to a Wall Street broker.

In the meantime, she and the students at Mizzou are being used. They are tools, cats-paws, a means to an end. Not for them but for the cynical adults behind them who manipulate them to get what they want.

What do they want? Why power, of course. It’s what they always want. The girl-child and the Mizzou protestors will be tolerated as long as they are useful to advancing the cause — and not one moment longer.

At around the 4 minute mark, Scarborough and his guests fall down the “there has to be more to this” rabbit hole,

Somebody is probably looking to run an unaudited slush fund, with the ability to get rid of anyone who asks any questions.

Does any body know if any of the alleged racial incidents taht this was suppposedly about even actually happened?

“Does any body know if any of the alleged racial incidents taht this was suppposedly about even actually happened?”

Mr. Sammy: That you would even challenge their stories tells us that you have a heretofore hidden, unsuspected, deep-seated pathological racist streak in you that no one, I repeat No One here has ever suspected. Deep and wide that streak must be. How dare you question the hurt their feelings have taken? Whether the events happened or not is irrelevant, the hurt happened. Their feelings count!!! I am appalled. Appalled, mind you, at your lack of sensitivity and humanity. Where is the maitre-de of this joint? I am shocked, shocked I tell you. And totally offended myself. My feelings are best expressed in a quote from that most excellent of movies Casablanca. “This is outrageous! I shall report it to The Angriff!”

Who or what is an “Angriff”?

From what I have read, the “cotton ball incident” happened in 2010.

In a world where everyone has a cel phone camera running 24/7, there is no video proof of whites yelling racial slurs.

As to the Poop Swastika (what self respecting skinhead would defile their own symbol by drawing it with feces, and what is it about a swastika that offends blacks by it’s presence?) the only evidence of it’s existence is a single picture online, which can be found on a Google search as first being posted in 2014, not Oct of 2015.

This whole “revolution” has Lisa Fithian and George Soros written all over it.

“True but not accurate” is the theme of our times.

This new soft effeminate coddled etc etc etc culture will be a set up to be CRUSHED by forces that are not. I can think of one right off the top… fundamentalist Islam. There are cultures than are toughened and will to make needed sacrifices for their beliefs. Today’s whinny kiddie culture is more than ill-prepared for the real world.

I read a commenter at another blog say the president who resigned is going to get a $1.7 million severance. Has anybody seen that number from a reliable news source?

Heck, if they’re going to pay him $1.7 million not to work, that’s all the reason he needs to resign. Gonna be some ticked off donors and alumni if that is true, though.

“Let’s see, I have two choices. I can try to stay in the office and tough this out, and be vilified for everything that I’ve said and not said by the media, the students, the foolish protesters and agitators, the faculty, the alumni and the board of trustees.

“Or, I can quit and drive out to the lake house to count my severance money.

It keeps reminding me of Larry Summers, forced out at Harvard for upsetting feminazis when he spoke the truth.

Also of course what should be done won’t be.

Those players should have returned to practice today only to be told to turn in their gear and that any scholarships had been revoked.

I am getting sick of people who can’t find any real racism just making it up out of thin air.

A reader over at The Atlantic site has this observation —

“Maybe this is the real Ferguson effect: People who have been coached up and primed to believe that they are victims, who want to be a part of some kind of important historical movement, to the point that they’re seeking confrontation over essentially nothing.”

Apart from the craven parting words, I don’t see this as an act of cowardice on the part of Wolfe. It seems like a practical assessment of the possibilities. If you attempt to impose order, the agitators will push you into a situation where some incident will occur which will arouse the anger of a large number of the normally marginally sane students, and you will lose anyway. See Kent State for an extreme example.

The whole idea of concentrating a large number of foolish adolescents in a small area without adult supervision is what the left likes to call “unsustainable” (and I’m talking about the students as well as the faculty).

Getting out of Dodge is an appropriate response. Parents should follow suit. The market will respond.

I have a suspicion that no one is talking about it, but there was an element of “take this job and shove it” in the discussions with the board for both Loftin and Wolfe.

The answer is obvious. The progressives running our universities are secret members of that long time institution of the Democratic Party, the KKK.

My takeaway is basically that it will soon be illegal to be white while American.

I keep seeing that image of Dakota Fanning in the movie “War of the Worlds” creating her “safe space” by placing her one
forearm over the other.

Dear still sane parents of any students of any color, background or persuasion who still attend this school.

Get out while you can.