The framework has already been built. 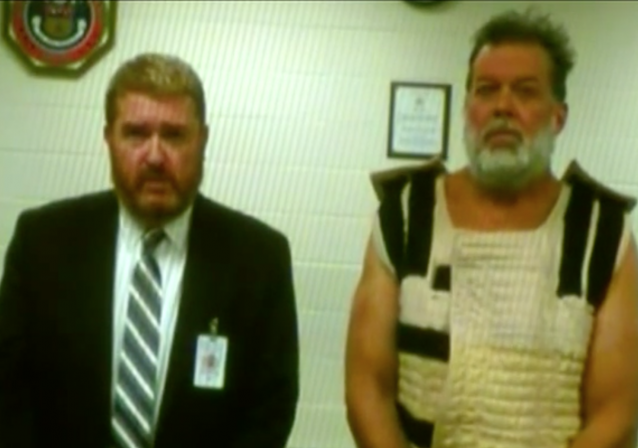 Monday, Robert Dear, the 57-year-old suspect in the Colorado Springs clinic shooting attended an advisement hearing alongside his public defender. Dear will be represented by the same public defender who defended the Aurora theater shooter some months back.

The hearing contained no discussion of motives.

The man accused of killing three people and wounding nine others spoke only a few words during a 13-minute court hearing Monday afternoon.

Dear spoke only three times. He answered the judge’s questions with only “yes” and “no,” and told the judge he had no questions. There was no discussion of a possible motive for Friday’s attack.

Formal charges against Dear will be filed next Wednesday. He is currently being held without bond on investigation of first-degree murder.

King, the public defender representing him, defended the Aurora theater shooter during a months-long trial over the summer. The jury was unable to unanimously sentence the convicted mass murderer to death. At least one of them cited his mental illness as a reason not to give him the state’s highest punishment.

Despite the media’s insistence that Dear is a pro-life activist goaded into violence after videos exposing Planned Parenthood’s baby part harvesting surfaced, to date, the authorities involved in the case have made no such determination.

Ben Domenech of The Federalist dug into the latest rush to politicize tragedy (emphasis mine):

More important for the media’s context for this story, according to anonymous law enforcement sources speaking with The New York Times, Dear “said ‘no more baby parts’ in a rambling interview with the authorities. The official said that Mr. Dear ‘said a lot of things’ during his interview, making it difficult for the authorities to pinpoint a specific motivation.”

Further investigation may reveal Dear to be a pro-life activist and it might not. At this point, we simply don’t know enough about Dear — and that’s the point. But the damage is already done. Take a look at this Reuter’s report on Monday’s Advisement hearing:

Or this ABC News article on Dear’s alleged anti-Obama statements: 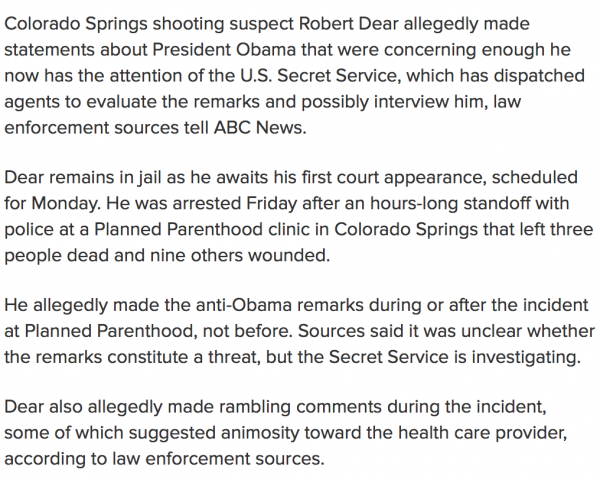 The framework has already been built. Dear is being portrayed as a man who’s beliefs are 100% congruent with right-wing everything and everyone. Any facts to the contrary will be summarily ignored, while those that fit the framework will be over-exploited. And so the cycle will continue.

Whoever is trying to find a reason for the shooting is looking for logic in all the wrong places.

How Dear transformed himself from a married, self employed art dealer in a small SC town noted for its historic preservation district and many antique/folk art galleries to a raving nut living in an off the grid shack in western NC and finally to a resident of am unincorporated community in central Colorado does not seem to interest the media. No place along the way is there any indication Dear was religiously or politically motivated. He didn’t register to vote in NC, though he did register in Colorado as unaffiliated. What can be inferred is that his life seemed to go off the rails in recent years, probably due to untreated mental illness.

Drugs, prescription or otherwise, are a pretty good bet for that kind of drastic life change.

Mental illness is also a pretty good culprit. Combine that with the fact that he apparently liked to smoke pot, and you’ve got the recipe for a spiral of crazy culminating in what we saw on Friday.

Planned Parenthood so much didn’t deal in baby parts that they issued a statement saying that they would “no longer be reimbursed for their costs.”

It is curious that the left would ascribe his motive to videos which they tried so hard to conceal and denigrate.

Hell Planned Parenthood built that framework within HOURS of the shooting. They started fundraising off of it before the bodies of the three victims had grown cold. Now this shooting is going to be used like a cudgel to beat the pro-life movement into submission.

I posted this morning on my own blog about this very subject, and what the pro-life movement needs to do about it:

I give Reuters credit for at least stating they were unable to independently confirm the “baby parts” report.

I agree with InEssence.

There is a single source for the baby parts comment and HE got his info from “unnamed” sources.

Of course the sources are always “unnamed” or “anonymous”.

This story was written before the shooting ever happened. The MSM had only to fill in place, time, date, and identity of the perp. It’s part of Democrat’s coordinated pushback against the House investigation of PP.

Just keep in mind that Dr. Gosnell killed more people at his abortion clinic than this guy did at the one in Colorado. Three counts of first degree murder for killing infants after they were born and one count of involuntary manslaughter for giving a drug overdose to one of his abortion patients.

I am convinced he’s not an outlier, for a number of reasons. No wonder they had this media campaign loaded and ready to go to shut down the investigation.

Suppose his motive was to rob the nearby bank, and then, when confronted with law enforcement, fled to the nearby clinic, where he was holed-up? What then? I’m assuming as part of a guilty plea, he will be forced to allocute, and state his motive?

I & a friend were among the 400 to 500 that picketed that P.P. Klinic in August. The pall of death emanates out from it past Centennial blvd which is the main street a quarter mile away.

It sounded to me, SecWind like the shooting started in the street and I’m wondering if he ran into the PP building because it’s built like a fortress. Could this be true?
I really wondering if Dear even knew it was a PP building?

Astroserf
Dear is an obvious nutbag. It’s always problematic to ascribe motivation to such.
Only the left does that in its attempt to justify its own specious positioning.

John Kerry can do it. Just ask him about legitimate terrorism the next time you run into him.

It is too easy to turn my mind into a pretzel on the issue of abortion and the eugenics based publicly financed Planned Parenthood baby killing factories.

Let us imagine that I marry my high school sweetheart, we go on to college, get jobs and decide to have a family. We take the big step to get a two bedroom apartment, we paint the room with all kinds of fluffy clouds in pastel colors, stack shelves with teddy bears and heffalumps and miracle of miracles happens and my wife starts puking her guts up in the toilet every morning and this over the counter pregnacy test thing says that we are going to have a baby.

We are living on cloud nine just left of the hot springs. All is not happy in Hootersville. It seems that some evil politician has armed foreign drug gangs as part of a political plot to undermine fundamental elements of the U.S. Constitution and has additionally imported unrealistic numbers of radical 18 to 30 yearold males from countries where almost the entirety of the population hates democracy, free will, self-determination, religious freedom and all western civilization. Bad goes to worse and at an evening at the local Nights of Columbus behind the Tex Mex and a quick stop at 9pm at Chuckie Cheese to please the wife who wants to see how families interact with their kids, I and my wife are brutally assaulted, raped and sodomized, resulting in my wife being killed by 17 guys named Mohammed.

Many thoughts go through my mind. I believe that these assailants killed not only my wife but also took the life of my child.

OK, slightly different thought on this. My high school sweetheart and I get through college, decide to have a child, get the two bedroom apartment, paint the nursery, her belly grows bigger with our child, a girl who we plan on naming Matilda. My wife takes up with a circus performer named Vladimir in no small part due to my inflating flatulence problem. She leaves me for Vladimir, and travels to the Crimean, during which time she has an abortion and kills my child.

OK, yet another slightly different thought on this. My high school sweetheart and I get through college, decide to have a child, get the two bedroom apartment, paint the nursery, her belly grows bigger with our child, a girl who we plan on naming Matilda. My wife takes up with a circus performer named Vladimir in no small part due to my inflating flatulence problem. She leaves me for Vladimir, and travels to the Crimean. After fifteen years my high school sweetheart realizes that Vladimir’s flatulence problem makes my own flatulence problem seem so trivial that she begs me to take her and our daughter Matilda back, which I readily do with joy in my heart. Happiness is never a constant. As it would happen, Matilda while walking to the local vocational school where she is being instructed to counsel one-legged lesbian Inuits (a popular and highly successful program in our community) is brutally assaulted, raped and sodomized by 17 guys named Mohammed, resulting in Matilda being pregnant. She does not want to give birth to the result of rape.

How is killing in one case OK, and killing in another case not OK? My mind literally explodes.

OK, yet another slightly different thought. Matilda is free spirited and doesn’t seem capable of keeping her knees together. She becomes pregnant. She doesn’t even know during which train ride she became pregnant, but as this is at some point in the future, and speculative medical assumptions have become reality and prenatal procedures are possible to determine the gender identity and sexual proclivity of her child, she much to the surprise of my wife and myself has announced that it is her body and her choice and for reasons only known to herself she has determined she will kill the gay child that is growing in her belly through an abortion at the tax payer funded Planned Parenthood abortion factory.

Twisting my mind in a pretzel. I see no easy answers to any of these possible scenarios.

What goes through the mind of an individual that understands thousands of babies are killed each year in these facilities, to get to the point where you would actually kill the killers of the babies? Kill the killers of the babies. Mind being bent into a pretzel. I try to understand, I can’t. It’s not possible to understand crazy. There are shadows and specters of logic and reason, but I can’t bring myself to the point of reaching a logical conclusion to this abortion question. God help me.

At this time, the only answer I have and have followed is that sex, while very enjoyable, can be very unsafe. It should have consideration to the possibility of procreation of life and the propagation of very malignant diseases.

Pro choice??? Choose wisely, because I don’t have any answers. This is far too complicated for me to make an absolute proclamation on this issue.

The msm has already used ‘hands up, don’t shoot, so it’s on to the next big lie.

The only tragedy here is that he didn’t take out more abortion doctors.