The economic discussion you’ve been waiting for 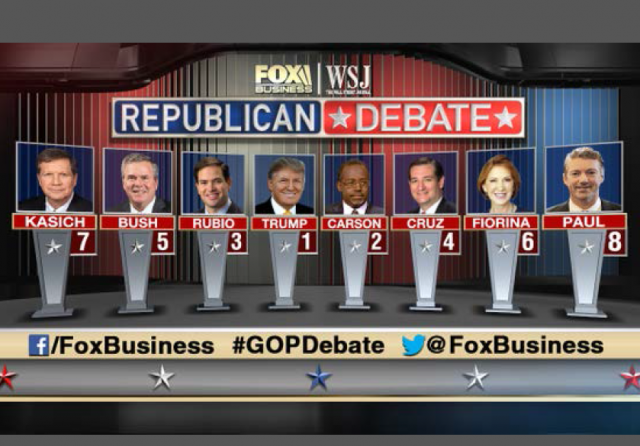 Howdy and thanks so much for joining us tonight!

Fox Business, host of tonight’s Republican debate has limited online access to cable subscribers. If you’d like to livestream the debate, click here. But remember, the debate is being broadcast behind a paywall so you’ll need your cable log-in information.

Welcome to the main stage! Tonight’s debate will feature…

Just losing 2 candidates has really made a big difference, in terms of the dynamics. Great discussion tonight.

Can we get rid of Kasich or at least send him to the democrat debate? Seriously… If that clown refers to illegal immigrants as “law abiding” one more time, my head is going to explode.

Agreed, and Ted NAILED the post debate interview with Cavuto. Unlike the Tee-balls he was tossing Kasich, Cavuto tried to grill Cruz (hostile witness, your honor) and Cruz handled it with class, aplomb, and never allowed Cavuto to get him off balance.

Yes, Cruz did have his “oops” moment (or really doesn’t like the Dept. of Commerce) but he is such a quick thinker and polished speaker that you almost couldn’t tell.

It reminded me of what my piano teacher always told me: if you make a mistake, don’t stop, play through it. One missed note can be forgiven; crashing the performance to a halt cannot be.
For what it is worth, most everyone had a malaprop, for example, Rubio said the most important job is president once when he meant parent. (Doubt you’ll see that on mainstream media)

I did not watch entirely, but from what I did watch:

Cruz was at his best
Trump didn’t hurt himself and was good
Carson was very good
Rubio was his normal self, practiced and good at this (but I know he is a liar, so it never means anything to me)
Kasich is in the wrong debate, he needs to run as a D
Fiorina, while a smart lady, just doesn’t come across well, IMO
Rand, not sure, didn’t hear him
Bush, the best he’s done. Not good enough.

I didn’t watch the “debate”, and from the lack of comments on this thread, not many others did either.

How about some analysis on primary math?

With the dem race in the toilet, a lot of liberals will be casting votes on the republican side of the house in the primary. This will definitely skew the results (and not in a good way).

Conservatives in favor of Cruz are screwed in states that allow fence hopping (like Washington state).