Clinton vs. Sanders vs. O’Malley 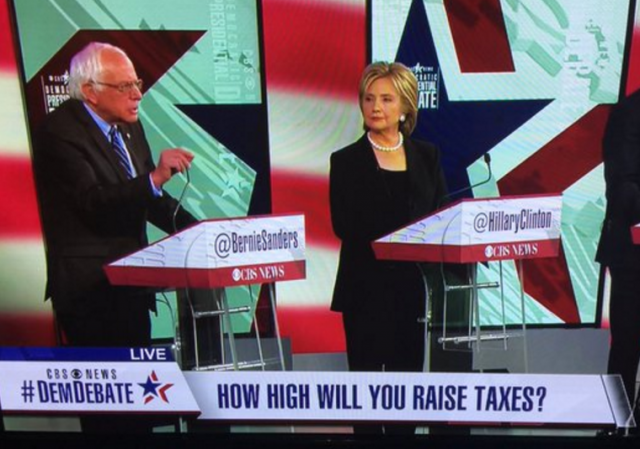 Too true. Tonight, Hillary Clinton, Bernie Sanders, and Martin O’Malley will come together for a two hour debate at 9 pm EST—ensuring that almost no one will bear immediate witness to whatever insanity and moral inversion flows from the mouths of the three most high-profile Democrats in America.

You can watch the debate live here:

LIVE FEED OVER – Highlight clips and tweets below.

Our own updates (by WAJ):

Clinton responds: “we abided by the agreement made by George W Bush” in Iraq. Says she wanted to arm moderates in Syria.

It's all Bush's Fault. Chug! #DemDebate

Hillary is doing the impossible — defending regime change in Libya.

Hillary used "nihilism" and "lust" in same sentence – pop quiz – who was she talking about? #DemDebate

You realize that nobody voting in the Dem primary will care that Hillary won't say "Radical Islam" right? #DemDebate They don't care.

Dems stressing they want really rigorous screening for the 65,000 Syrian refugees they want US to accept. So why accept 65,000?

Last Democratic debate there were 800 credential reporters. This time, not so much. pic.twitter.com/YwZUroTllN

Bernie: read my lips–top rate will be below 90%

This sums it up perfectly. Hold on to your wallets, America… #DemDebate pic.twitter.com/Tsk2Jikhd1

So Hillary took money from Wall Street to help it recover from 9/11? Most shameless answer this century

More back-scratching over emails between @BernieSanders and @HillaryClinton. Maybe he thinks she’s going to prison regardless #DemDebate

Hillary Clinton: "I come from the 60s. A long time ago." Bet this bite will be used in a GOP ad

Biggest crisis in her life? @HillaryClinton says the bin Laden raid. I nominate her for the “stolen valor” award for that answer #DemDebate

Hillary tried to join the Corps, but must have been famous in the army. They sing about over Hill, over Dale. Anyone have a clue who the Dale guy was?

Pleasantly surprised by John Dickerson’s questions — a bit more probing and professional than I have been used to in the liberal media.

This has been a clown car of insanity.

And wasn’t it convenient that they had to cut the gun control portion short to address a tweet about that evil wall street?

At least her wig didn’t fall off.

Actually, I gained a small amount of respect for Bernie Sanders for his comments on climate change.

At least he’s sticking to his guns.

He’s a misguided fool but at least he’s sticking to what he believes.

And, if elected, Bernie is going to go back in time and preempt the Invasion of Iraq! That is apparently his plan to combat Islamic terror. Wow. What a guy.

Hillary used “nihilism” and “lust” in same sentence – pop quiz – who was she talking about?

If it was just nihilism, I’d think she was talking about herself. But throw in lust, and it’s obviously her husband.

I clicked on the “debate” just as Bernie was talking about how all 320 million of us ought to pay for each other’s healthcare. As if he has been in a time warp and unaware that we just had a big two year fight about that. I could not take listening any longer.

Sanders was not going to be pushed into deviating from the hard Left position, that there was money to be found in the defense budget for those domestic spending priorities.
He’d sooner have ISIL cut off his head.

I switched channels 15 minutes into the debate.