“Liberté, égalité, fraternité, and crème brûlée…versus WHAT?” BBC Host Goes Off on ISIS

“Liberté, égalité, fraternité, and crème brûlée…versus WHAT?” BBC Host Goes Off on ISIS 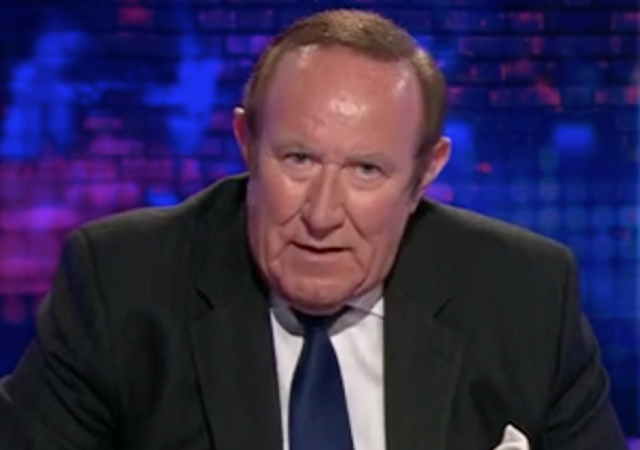 This month’s attacks in Paris, France killed 130 innocent people and left hundreds more battered, bruised, and reawakened to the danger of radical Islamic terrorism in the west. Political leaders and presidential candidates are speaking out, and everyone’s megaphone is pointed straight at Syria and the heart of ISIS.

BBC anchor and host of This Week Andrew Neil took his network’s coverage to the next level this week when he totally let loose against the terrorists’ ideals:

“Welcome to This Week, the week in which a bunch of loser jihadists slaughtered 132 innocents in Paris to prove the future belongs to them, rather than a civilization like France. Well, I can’t say I fancy their chances.”

Well, IS, or Daesh or ISIS or ISIL—whatever name you’re going by, I am sticking with IS, as in Islamist scumbags.

I think the outcome is pretty clear to everybody but you. Whatever atrocities you are currently capable of committing, you will lose. In a thousand years’ time, Paris, that glorious City of Light, will still be shining bright, as will every other city like it, while you will be as dust, along with the ragbag of fascists, Nazis, and Stalinists that have previously dared to challenge democracy, and failed.

We need more of this attitude in our coverage of terrorism and the spread of ISIS. In the wake of the attacks, Barack Obama said that the carnage was “an attack on all of humanity and the universal values we share.”

This, of course, is crap.

The massacres in Paris did not constitute a collective attack on any sort of shared value system or collective consciousness; no, it was an attack on a very particular value system and state of mind—one that is fundamentally and eternally incompatible with the tenants of radical Islam and in fact any liberty-hating ideology.

ISIS doesn’t just hate Christianity, or democracy, or the concept of an equal society; they also despise little things that make places like America and France places that people want to escape to.

We live in a world filled with wonderful things like the Federalist Papers, and Beethoven, and Monet’s water lilies—but we’ve also been blessed with the bizarre, the profane, and other things that offend, shock, or bore 90% of the population. Significant or no, they matter in the context of the war on terror because they exist simply because we want them to, apart from any institution or structure that mandates or forbids them.

Politics inevitably clouds every discussion we try to have about the rise of radical Islam—just look at what the DNC did with its latest ad. It’s frustrating, but we can beat it if we divert from the political and focus, like Andrew Neil did, on all of the other things that distinguish the way we live from the desolate hellscape that is Islamic jihad.

Not quite Churchillian, but close enough!

Not nearly close enough. It doesn’t acknowledge the squalor and menace and violence that Muslims have been bringing to European cities for a long time.

And how many temples, churches, relics, ancient artifacts, and icons have they destroyed . . .

These maggots should not be called “Radical Islamist. The methods they employ to terrorize are the same methods they have used for decades thus are not really radical, they are SOP.
A more accurate name would be “Islamic Supremacist”. “Low life maggots” works too.

Are we supposed to applaud his moral clarity for recognizing that ISIS is really bad? What has he said about the squalor and rape and violence that pre-ISIS Muslims brought to Britain, and the banlieues of Paris, and large parts of Brussels, and Malmo, and Marseilles, etc.?

The Beeb has a reputation for sanitizing Islam and painting Islam-critics or those who worry about the Islamic colonization of their homeland as practically Nazis themselves.

As for the “death-cult barbarity that would shame the Middle Ages”: Is Neil not aware of the barbarous attacks that Muslims were perpetrating against medieval monasteries and villages for many centuries? Does he not know that the European Middle Ages produced Peter Abelard, Roger Bacon, St. Francis of Assisi, the Gothic cathedrals, agricultural and commercial innovation, the beginning of polyphony, the beginning of scientific investigation — while Muslim authorities had decreed that Truth was complete and closed?

Does he know that the tradition of Islamic beheading and conquest and plunder and sex-slavery began with the founder of Islam? Does he know that amputation and slavery and the death penalty for “blasphemy” are written into orthodox Islamic law?

Mr. Neil left out one pertinent fact. The world rose up and smote the fascists, Nazis, and Stalinists. We are drawing silly red lines and then backing away.

We started out drawing silly red lines for the Nazis too. They crossed a lot of those lines before they got any serious pushback. They too mistook the hesitation to go to war for a profound weakness.

I am not hoping this happens but it might; the Islamists might take over parts of Europe. They view this as a religious war and the West doesn’t. That is a huge mistake. It’s like bringing a gun to a knife fight (no I didn’t get that backwards). Knife fights are bloody, brutal and up close. At knife range a guy can grab your gun and move it off line or even take it from you. Even if you win you might still be dead.

The West has lost it’s Christian faith in the last hundred years. Europe voluntarily threw away one of their crown jewels of culture for what? They want to win? Find their faith before it’s too late.

And they owe Enoch Powell an apology. He warned them and they put their fingers in their ears and stomped their feet.

Yessssss! Europe needs MORE of THIS please – perhaps a few in media/leadership in Europe (oh, just a few) do have a hidden back bone? Perhaps Oui!

Fear not! The war has already begun especially now that the people are awake. For two decades, I’ve waited for this day. Not a day of rage or hatred, but a day of recognition, of acknowledgment that we have our enemy in our midst and it is the Muslim. They came amongst us, heard and rejected the Gospel, and have sought to foist their ancient and pagan hatreds upon us. Two armies will go down into the valley if Megiddo; only one will emerge victorious. It will not be them.

Annihilate ISIS and the problem will remain, unchanged.

“Well, I can’t say I fancy their chances.”

Looks like they’re going to win, with no one in opposition at all. The French government is going after only the few that actually committed the latest atrocity while simultaneously promising to keep accepting Syrian “refugees” and, of course, not even considering slowing the flow of Muslims from other countries into France.

A sane government, with a care for the future of their country, would not only be halting all Muslim immigration but mobilizing to deport every Muslim currently within its borders. Unless they do that, Islam will eventually win.

You’d think the French would have learned in Algeria.