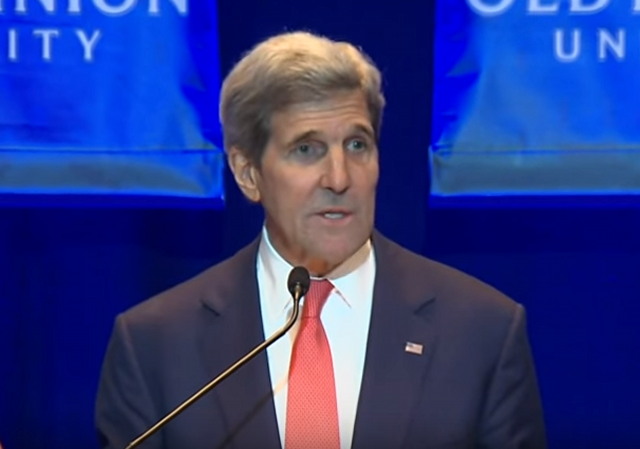 John Kerry, in a recent speech at Old Dominion University, insisted that climate change is a threat to national security.

In a speech delivered at Old Dominion University in Norfolk, home to the world’s largest naval base and already experiencing flooding linked to climate change, Kerry called climate change a threat to national security.

“We have to prepare ourselves for the potential social and political consequences that stem from crop failures, water shortages, famine and outbreaks of epidemic disease,” he said. “And we have to heighten our national security readiness to deal with the possible destruction of vital infrastructure and the mass movement of refugees — particularly in parts of the world that already provide fertile ground for violent extremism and terror.

Kerry said he would convene a task force of senior government officials and outside experts to determine how to make climate change predictions a part of foreign policy planning.

A recent editorial from Investor’s Business Daily offers a different theory on the issue:

What Climate Alarmists Want: ‘A World Without Capitalism’

Climate Change: Researchers from developed nations who insist that humans are warming the planet have inadvertently given Third World nations a weapon to shake down capitalist nations. Or was that the plan all along?

Third World nations haven’t developed their economies because their governments are often run by con men, thieves, killers and tyrants.

While these governments never recognize that they are the problem, they do know an opportunity for a racket when they see one.

Extortion often comes with a veneer of legitimacy, though, and that’s what we have in a manifesto produced by Bolivia. It is ostensibly that country’s contribution to the United Nations climate conference that begins later this month in Paris.

But it’s really a facade hiding a corrupt campaign.

According to the Bolivian government, which takes its orders from extreme-left President Evo Morales, “the failed capitalist system, (which) promotes consumerism, warmongering and commercialism, causing the destruction of Mother Earth and humanity, (has) triggered the climate crisis.”

Good to know that. As for the solutions, they include “adoption of a new model of civilization in the world without consumerism, warmongering and mercantilism.” Bolivia also wants “a world without capitalism.”

Who sounds more plausible to you?

Where to start? A Collectivist myth is about more than a cartoon character. And this guy heads our foreign relations.

There is no way January 2017 can get here fast enough.

Kerry, just stuff it. Climate change is not the biggest threat. The morons who believe it is are.

What a baffoon! This idiot hasen’t accomplished anything on his own.

He has found, wooed, married, and survived TWO wealthy widows. That can’t be easy with a face like a horse.

That face is necessary to balance out the other end of the horse that dominates his character.

Climate change is a threat but not as this fool says it is. It is the LACK of change coupled with the LACK of crushing socialism that is a problem. The left needed to get all of the controls in place so they could claim that the controls saved us from climate change — no change would be the result of their wonderful controls.

Now, we have no change (change — could we possibly be more vague?) with no controls. Result = panic on the left. Kerry’s IQ seems to drop every month and he did not have any extra to lose.

Long story short, John Kerry (who once served in Vietnam) is a world class idiot.

You almost got it right. Should read: no class idiot.

In 1974, the CIA published the report linked below warning about crop failures, refugee crisis, war, etc. associated with a climate change that they claimed began in the late 1960s. They talked about how snow and ice cover had increased by about 10-15% around the world and how temperatures in Greenland were well “below normal” for 19 consecutive months, something they claimed had never happened in the past 100 years. In other words, they were assessing the risks associated with Global Cooling (though they did not use that phrase explicitly).

That was 41 years ago. I suspect every U.S. government in the past 41 years has continued to commission similar reports and engage in extravagant contingency planning about how to deal with looming climate catastrophes.

It’s just that other governments didn’t publicly gin up fear about it that they could exploit for their own political purposes like this government tries to do.

That CIA report is te best proof that Kerry is NOT a world class idiot. This is not original with him. This trope has been going around for a long time.

Kerry does not have the wit to disagree with the conventional wisdom of the official experts maybe. But that doesn’t make you into a world class idiot – a minor league one, perhaps, but not world class.

Sammy makes a fair point.
Also, why shouldn’t Kerry be concerned? With the millions (tens of millions?) dying all around us due to AGW the situation is bleak! With all those islands sinking into the sea due to meltage, who can go about their business as usual?
Oh. Wait. Neither of those things is happening. Or will happen in our lifetimes.

Buffoonish statements made by an alarmist namby-Bambi milquetoast – why “It’s like eating ten lbs. of dry toast with a sawdust chaser.”

He will not be treated well by the history books unless code pink and Hamas co-writes them.

Is it any wonder why the United States Foreign Policy is in complete shambles?

All of this from the dolt who “negotiated” The grand Iran nuke deal!

John Kerry is a bigger threat to national security than “climate change”.

Exactly. What I was going to say.

How much we would have to pay Putin to take him off our hands? Surely Vlad has a price.

It’s hard to fathom this, but Hillary Clinton was a far better secretary of state: for 4 years, she did nothing but fly around the work getting drunk. A waste of jet fuel, but by accomplishing nothing, she did far less damage than this moron and his nose-picking president.

In that sense, Maria Bartiromo didn’t sound like an absolute complete ass – though a solidly partial one — when she asked the GOP candidates to compare their records against Clinton’s “impressive résumé.”

Climate Change, even if real, isn’t about Bambi at all. Deer are migratory — they can respond to a 1 degree increase over a hundred years by making almost unnoticeable changes in their migratory patterns.

Who does he think he is? Al Gore?

Just because he met his future wife at a ” Climate Warming Conf,” he and our dear leader are making such crazy statements, trying to get our eyes off of the destruction that they both are wreaking all over our country. Our Leader keeps making such bizarre statements. Does he think he is a funny man ? He thinks that if he tells a lie often enough, we will believe it. NO, we are smarter than you. Maybe your ” Basket weaving,” College grads will believe you.

This Bozo is actually correct. Climate change is a threat to our freedom. The solutions the progressive fascists propose would greatly expand the power of government and that is a threat to our liberty. Furthermore, it would destroy the world economy, throwing billions into poverty and kill millions.