IAEA Chief: Iran Still Stonewalling About Its Past Nuclear Work

IAEA Chief: Iran Still Stonewalling About Its Past Nuclear Work 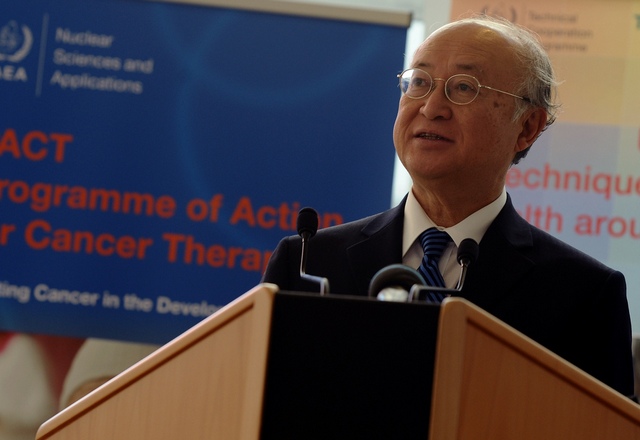 Last week saw a very important piece of news about the nuclear deal with Iran. And it was covered by neither The New York Times nor The Washington Post.

International Atomic Energy Agency Director-General Yukiya Amano said that Iran, instead of coming clean about its past nuclear work, has continued to stonewall. Amano, too much the bureaucrat to use those actual words, said that his agency’s report will not be “black and white.”

But Iran was obligated to come clean by the interim Joint Plan of Action (JPOA) from two years ago “to facilitate resolution of past and present issues of concern.” That obligation to come clean also was required by this summer’s Joint Comprehensive Plan of Action (JCPOA) to “fully implement the ‘Roadmap for Clarification of Past and Present Outstanding Issues’ agreed with the IAEA, containing arrangements to address past and present issues of concern relating to its nuclear programme.”

Since Amano did not say that Iran “fully” addressed questions about its past nuclear work, he’s acknowledging that Iran did not comply with its obligations.

Reuters, the Associated Press and The Wall Street Journal (Google link) all did original reporting on the story. I will use the Journal here, because its coverage was the most complete.

At a news conference in Vienna, International Atomic Energy Agency Director-General Yukiya Amano confirmed he would present his final report on the five-month probe into Iran’s past nuclear work early next week. …

“As I said in the past, the assessment…will not be black and white,” Mr. Amano said. “This is like a jigsaw puzzle and…we have (a) better understanding now” of Iran’s past actions.

The IAEA’s probe was a key condition in July’s nuclear agreement between Iran and the six powers. That deal saw Tehran agree to strict limits on its current nuclear program in exchange for the easing of U.S., European and U.N. energy, financial and commercial sanctions.

The investigation was supposed to answer twelve questions the IAEA spelled out in “Roadmap” (cited above) in 2011.

Amano said that his report is factual but that it will be up to the IAEA’s board (the IAEA board is made up of member nations) to determine if the criteria were satisfied, for the world to proceed to Implementation Day, which is to be no later than December 15. Implementation Day will involve Iran reducing its stockpile of enriched uranium, reducing its centrifuges and redesigning its heavy water reactor, Western nations removing nuclear-related sanctions against Iran and the United Nations Security Council cancelling 7 resolutions targeting Iran for its nuclear cheating.

According to the Journal, Iran has “complied with all the formal steps in the IAEA probe,”the United States wants to declare Iran in compliance with its obligations so it can lift sanctions. However, the Journal also cites diplomats are familiar with the situation who say that while Iran may have met its formal obligations, it has provided the IAEA with very little new information nor allowed the IAEA access to a number of officials and documents that the agency had sought. Put another way, Iran has gone through the motions but done little or nothing of substance.

So the United States would rather lift sanctions than ensure that Iran complies with one of its fundamental obligations to the IAEA. Why is this bad?

The administration has insisted the deal is not built on trust but on verification. In the words of President Barack Obama in August, “After two years of negotiations, we have achieved a detailed arrangement that permanently prohibits Iran from obtaining a nuclear weapon. It cuts off all of Iran’s pathways to a bomb. It contains the most comprehensive inspection and verification regime ever negotiated to monitor a nuclear program.”

The tool by which this verification regime will be implemented will bebthe Additional Protocol, a series of steps spelled out by the IAEA that Iran will have to adhere to, in order to ensure that it is not cheating on its obligations. The IAEA will be setting out the terms of compliance for Iran and judging whether Iran meets those terms.

If the United States and its partners says that Iran’s compliance is good enough it sets a dangerous precedent for the future. What if the IAEA says that Iran is not meeting one or another of the standards it set for Iranian compliance? (That last sentence should have started “When the IAEA says.”)

Will the United States assert that Iran’s compliance in the future is good enough too? Verification can only take place if objective standards are put in place and adhered too. By not adhering to the standards in two previous documents the United States is signaling that it is more interested in having a deal than in verifying or enforcing it. This violates the very standard that Obama set forth in justifying the deal.

The failure to hold Iran accountable for its past nuclear work is dangerous for another reason. Several Iranian official have recently said that the failure of the IAEA to close Iran’s nuclear file of possible military dimensions (PMD) of its program will be grounds for Iran to stop implementing the deal.

The latest is Iranian foreign minister and chief nuclear negotiator, Mohammad Javad Zarif, who said on Sunday, “that the closing of the PMD file is a ‘prerequisite’ for the implementation of the nuclear deal.” So if the United States lets Iran get away with less than full compliance now, it is signalling that any time that Iran threatens to walks away from the deal, it will capitulate and demand no further compliance from Iran. So not only is the United State giving up its leverage to enforce the deal, it is ceding all the leverage for implementing the deal to Iran.

(Zarif claims that there are no PMD for Iran’s nuclear program and therefore the file must be closed. Inconveniently, a top Iranian official last week said that building a nuclear bomb would now be “easier than putting in a contact lens,” for Iran.)

Make no mistake the nuclear deal with Iran is atrocious and will not prevent Iran from developing nuclear weapons. But by not taking a stand here, the United States will forfeit any shred of verifiability contained in the deal, making it even more dangerous than ever.

Tom Cotton recently got the State Department to admit that Iran never signed the agreement. So, they don’t have to do anything they don’t want to.

They can declare it null and void any time they want to.

What is needed is for whoever is holding office in the United States to understand this thing as well.

It was Iran in fact that didn’t want this to be a legal agreement. It’s not a treaty, it doesn’t pretend to be any kind of treaty or binding agreement – it’s only a “plan of action”

Iran will do this, other countries will do that, then more things will happen in various stages, in such and such an order.

And Iran has said they would declare the agreement void if any new U.S. sanctions against Iran, regardless of the alleged purpose of the sanctions, is put into place, and if the U.S. doesn’t lift all of its sanctions.

There isn’t any deal, and there never has been any deal. It’s held together with paper clips and paste.

The only question is how long will this agreement last before it completely falls apart.

I guess now we wait and see how far Iran goes in its limited destruction of its nuclear capability. And what they will try to get other countries to do first.

The Iranian parliament approved an agreement whose terms were altered to fit their own interests. It departs significantly from what Obama and Kerry agreed to. It means there is nothing. Iran is going to do whatever they want.

Barack (Allegedly named after Mohamed’s Horse)Hussein Obama is intellectually and ideologically incapable of accepting even the possibility that Islam, or any Muslim, might have committed some evil, nefarious act against its fellow man. Recently in an address in Asia he referred to “We Muslims…” during an address.
With Hussein Obama as friend, who needs enemies?

It’s worse: there’s no denial on Obama/Jarrett’s part. It’s all part of an intentional, ugly plan, which will ensure the reality of a nuclear World War III.

Barack with a K means “blessed”, and has no connection at all with Buraq the Magic Horse, with a Q, whose name means “lightning”.

Mssr. Artie d’Deal has said that he will make this agreement work.

What deal? What agreement? It’s just a complete fraud.

Failure is not an option to “preserve humanity and save the planet.” (Climate Change!)

Failure is an option because Iranian money will be released to support EU socialism. (Iran Nuclear Non-Agreement!)

To refer to Obama as “the weak horse” is giving him too much credit. “Weakfish” is more fitting.

Nuclear War is coming to the Middle East. It is only a matter of time.

The point of this “deal” is the destruction of Israel.