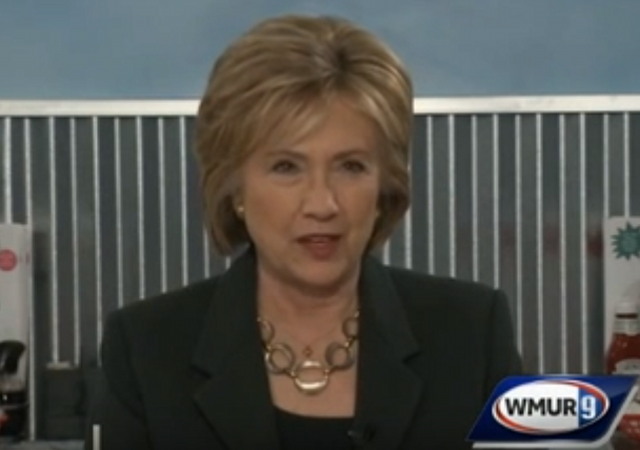 At a political breakfast event in New Hampshire this week, Hillary Clinton enthralled the guests at her table with a story about the time she tried to join the Marine Corps.

Hillary Clinton’s claim that she tried to join the Marines

One Clinton story that has often been greeted with skepticism is her claim, first made in 1994, that she once tried to join the Marines in 1975. On the campaign trail, she brought up the story again.

Can this story be confirmed?

“You’re too old, you can’t see and you’re a woman,” Mrs. Clinton said she was told. “Maybe the dogs would take you,” she recalled the recruiter saying. (Actually the military slang is “dogfaces.”)

“It was not a very encouraging conversation,” she said. “I decided maybe I’ll look for another way to serve my country.”

Dowd asked: “So, if she was talking to a Marine recruiter in 1975 before the marriage, was she briefly considering joining the few, the proud and the brave of the corps as an alternative to life with Mr. Clinton, who was already being widely touted as a sure thing for Arkansas Attorney General?”

Hillary Clinton tells a story of how she tried to join the Marines in 1975 but was rejected because she was too old. The problem? The story may not be totally true.

As The Post’s Fact Checker illustrates in a column dedicated to Clinton’s Marine claim Thursday, there’s little reason to believe that she — already a very prominent person — would suddenly attempt to join the military.

Does everyone remember how much time the media recently spent fact checking Dr. Ben Carson’s claim about being offered a scholarship to West Point?

Here’s a video of Hillary telling her story:

Bill Clinton was probably not the only reason Hillary moved to Arkansas. As she admitted in her autobiography, she had taken, and flunked, the D.C. bar exam around that time. She might have thought that she could use her Capitol Hill experience to land a job with a big-name D.C. firm, but failing the bar exam (and having a boss who was unwilling to write her a reference) would have made that unlikely. So she followed Bill Clinton to Arkansas, having no better options at the time. And who knows, maybe she did ask about joining the Marines. It’s no secret that Hillary hated Arkansas and thought she was too good for the place. Perhaps she briefly considered joining the military as a way to get out of there.

The problem with this conjecture is the implied distain attributed to a Marine or any service recruiter to a civilian. Within the service we professional soldiers are sometimes like Gunnery Sergeant Hartman but never to outsiders and certainly not to any potential recruit.

Occam’s razor says the most reasonable explanation is that she is simply a pathological liar. And oh by the way, she belongs in jail. Or gaol. Whichever you prefer.

… but surely she did communicate with Eleanor Roosevelt

Clintons lie. They lie about everything. It is who they are.

Recruiters don’t run people off, and certainly not a female in the mid 70s with a bachelor’s degree and a law degree. That would be prime recruiter material.

Not surprisingly, many of the mil-blogs are all over this.

To say the least, they aren’t happy and are calling Hillary out on this story.

The basic gist is that at the time, the military was all volunteer and hurting for recruits. No one was rejected if they were below the age of 30. Furthermore, unless her eyesight was not correctable to 23/30, she would not have been rejected.

She is lying on the basic facts of her eligibility.

Furthermore, as a college educated person with a law degree, she would have been a sought after recruit for any of the services.

She lied. Straight up lied. (Which is a pattern for her.)

The idea that the WaPo would give her story “2 Pinocchios” shows the depth (the lack of depth) of their fact checking.

Just another pass for the Clintons.

De rigeur if you’re a Dem.
Senator Richard Blumenthal(D-CT) enthralled the state’s electorate while he campaigned for that office with tales of his being “In country” in Vietnam while the truth was that the closest Dicky got to being “In Country” was a ‘Toys For Tots’ collection warehouse in DC.
The state’s voters, recognizing a knight in shining armor when they saw one, sent him to DC anyway, despite the little lies.
“If you like your healthcare plan, you can keep your healthcare plan! Period!”
“Al Qaeda is decimated and on the run!”
“Emphasize that the deaths of four Americans in Benghazi, Libya was all the result of a spontaneous demonstration over some hateful internet video rather than a failure of policy.”

Today I read a letter to the editor of the San Diego Union-Tribune, about all then news reports that “prove” Ben Carson is a liar and incompetent (!). You have to realize, of course, that the Union-Tribune printed at least two stories, one from the AP and one from the New York Times, without any of the blowback or retractions.

That person, of course, was relying on the same “news” sources that cover for Hillary, bolstered by personal prejudice.

And she probably votes.

That is what we are up against.

There is an article about this over at the “This Ain’t Hell” military website that adds more to the argument that she’s not telling the truth. Here’s the link:

There’s more in the comments there, but a lot is enlisted men’s humor. Some may like that, too. After all, it’s close to Veterans Day.

What also makes her “story” suspect is that a few years ago she said at age 13 she wrote to NASA about her interest in working for them. She says she got a letter back from them saying they “don’t take girls. “She has never produced a copy of this letter.

And then reporters for a blog on space frontiers tracked down other women who had contacted NASA about their interest in working for them in the 1960s. NONE of the women say they got a letter about being rejected because they were a girl. In fact, they say NASA wrote them ENCOURAGING letters: http://www.thespacereview.com/article/2310/1

Also, in a USA TODAY story yesterday about Hillary and the Marines, the reporter posted that USA Today wanted to hear from the Marine who had dealt with Hillary

Stephanopolis will simply chaulk it up to wig trauma, being hers is too tight.

Hillary’s seditious cackle was the reason she was dishonorably discharged (booted out the door), that and her push-up bra couldn’t pass muster.

Did you misspell “cankle”?

Maybe, Hillary was ‘Flat Broke’ and needed a govt job?

Nah, just lying to plump her socialist donor cred… like coming under fire.

The closest Hillary ever came to a recruiting office is the time she happened to walk by one – without even noticing what it was.

Shouldn’t be too hard to track down who was on duty at the recruiting stations in question during that timeframe. Let’s see if anybody remembers a fugly hippie with massive cankles.

in 1974 she was a committed leftist, toiling on the house judiciary’s watergate committee to bring down president nixon. even back then her ethics were shady. yet we are supposed to believe that she subsequently decided to join the military, an institution despised by her fellow travelers?