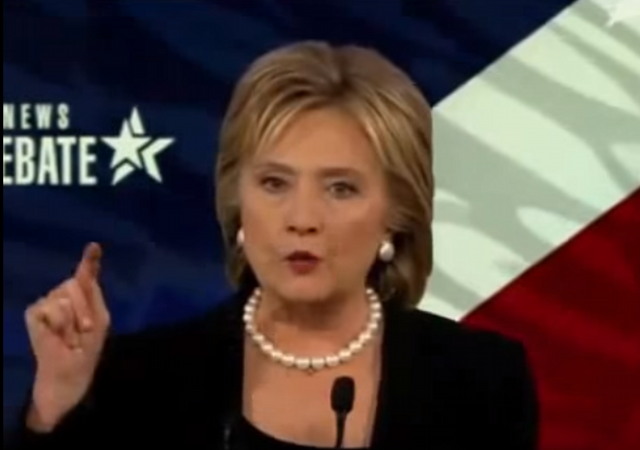 In one of the weirdest moments from last night’s Democratic primary debate, Hillary Clinton invoked the attacks of 9/11 to justify the financial support she has received from Wall Street.

In an angry and defensive way, Hillary claimed that as a senator from New York, she worked with people on Wall Street to rebuild after the attacks. She also used the moment to play the gender card.

Even liberals are scratching their heads over this. Slate reported:

Bernie Sanders pointed out (fairly) at Saturday night’s CBS Democratic presidential debate that Hillary Clinton raises a substantial amount of campaign money from Wall Street, while moderator (and Slate columnist) John Dickerson alluded to the millions of dollars in paid speeches that the former New York senator has given to major banks. Pressed on whether this would compromise her ability as president to properly regulate the financial industry, Clinton answered with a non sequitor, citing her female donors and alluding to 9/11:

Oh, wait a minute, senator. You know, not only do I have hundreds of thousands of donors, most of them small, and I’m very proud that for the first time a majority of my donors are women, 60%. [Cheers and applause.] So I— I represented New York, and I represented New York on 9/11 when we were attacked. Where were we attacked? We were attacked in downtown Manhattan where Wall Street is. I did spend a whole lot of time and effort helping them rebuild. That was good for New York. It was good for the economy, and it was a way to rebuke the terrorists who had attacked our country.

The reaction was almost immediate. The Washington Post reports:

Hillary Clinton invoked 9/11 to to answer a question about Wall Street, and Twitter was not happy

It’s tricky to invoke 9/11 on a debate stage. Trickier still when the question has nothing at all to do with national security.

Bernie Sanders slammed Hillary Clinton’s ties to Wall Street, stating that her plans to reform the financial industry are “not good enough.”

Why, Sanders asked, has Wall Street been a “major contributor” to Clinton’s campaign? “Maybe they’re dumb and don’t know what they’re going to get, but I don’t think so,” he said.

“He has basically used his answer to impugn my integrity, let’s be frank here,” Clinton said, noting she has “hundreds of thousands” of donors, many of them small.

Wait, Hillary Clinton’s answer is Wall Street supports me because 9/11?

My dad worked in WTC from the day it was built to the day it went down. @HillaryClinton, never invoke 9/11 to justify your Wall St positions

After the debate was over, CNN reported that the Clinton spin machine was in full force:

In an otherwise unremarkable debate, this stood out as one of the strangest moments.

Will the liberal media accuse HRC of pandering or even taking advantage of women and Wall Street Donors for her campaign? Her statement is bizzare and ludicrous.

These candidates, especially Clinton just don’t get it.

OK. This is a logical disjunction.

But it’s TOTS fine when your voters don’t savvy either “logic” or “disjunction”.

The way Hillary explained it afterward to Huma, “It’s like having your cake and eating it too, Sweetie.” Or as Bill I Didn’t Have Sex With That Woman Clinton rephrased it speaking to Monica said, “Hand me another cigar will ya.”

Now the campaign is saying we didn’t hear what we heard.

It’s hard to watch any clips from last night’s debate without this coming to mind — and making MORE sense than the three staged stooges: http://laughingsquid.com/a-bad-lip-reading-of-the-first-democratic-presidential-debate-held-in-las-vegas/

my favorite part was *this* gem: ” “Wait a minute, he has basically used his answer to impugn my integrity.”

how can you impugn a character trait she doesn’t possess?

Wait, Hillary Clinton’s answer is Wall Street supports me because 9/11?

This probably worked very in the focus group.

The reason for mentioning the women donors was that the issue was whether or not her donors were trying to get something from her.

So she replied that this was an attack on her integrity, and that she had hundreds of thousands of donors, and most of them were small, and a majority even – no 60% – were women, who presumably either don’t corrupt people or give her money because they want a woman in the White House.

And then about Wall Street she added that it would have been logical for them to give money because they were affected by 9/11 and she spent whole lot of time and effort helping them rebuild (or at least helping get money spent on alleged recovery or rebuilding, like that unnecessary rebuilding of the Fulton Street station that they couldn’t even actually build the way it was first planned because it cost so much money.)

And that helping 9/11 recovery was good for New York. And not just for New York, but the economy as a whole. And if that’s not enough for you, it was a way to rebuke the terrorists who had attacked our country.

So you could say that everything the contributors associated with Wall Street got was something that should have been gotten.

She probably staches the cash under that wig she’s wearing.

I’m actually with Clinton on this one. Her answer to the question was a fair and logical one. Sanders accused her of being in Wall St’s pocket, saying that if they’re not expecting her to protect them then why are they giving her all that money. So she answered that question, saying that the reason they’re giving her money is not because they expect her to side with them, but out of gratitude for what she did for them after 9/11. It’s a fair reply to that particular challenge. Who knows, it might even be true!