Democrats sure are afraid of words. 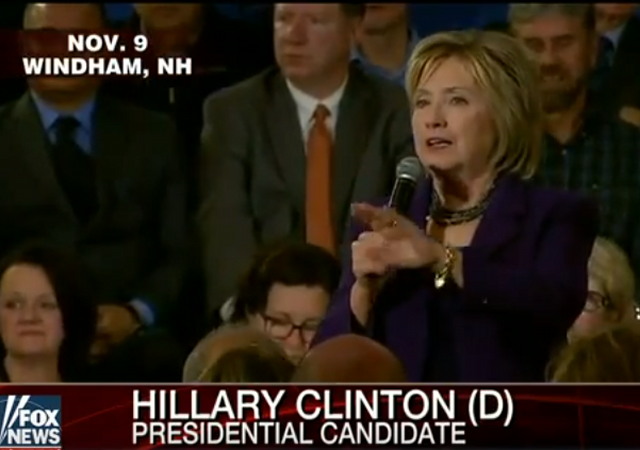 Illegal immigration and terrorism are hot political issues in the 2016 election, which makes things difficult for Democrats who aren’t allowed to say “radical Islam” or “illegal immigrants.”

Hillary Clinton recently used the latter term at a campaign event in New Hampshire and has now been forced by the left to do penance.

Boulder, Colorado (CNN) – Hillary Clinton said Tuesday that her use of the term “illegal immigrant” at a town hall in New Hampshire earlier this month was a “poor choice of words.”

“That was a poor choice of words,” Clinton wrote during a Facebook chat. “As I’ve said throughout this campaign, the people at the heart of this issue are children, parents, families, DREAMers. They have names, and hopes and dreams that deserve to be respected.”

She added during the chat, which was sponsored by Telemundo, that she has “talked about undocumented immigrants hundreds of times” throughout the campaign and “fought for years for comprehensive immigration reform.”

During a town hall earlier this month in Windham, New Hampshire, Clinton gave a more conservative answer on immigration and controlling the United States’ southern border.

“Well, I voted numerous times when I was a senator to spend money to build a barrier to try to prevent illegal immigrants from coming in,” Clinton said. “And I do think you have to control your borders.”

This was a big deal for progressives, who are more concerned about feelings and political correctness than the issues facing America. It’s so important that Hillary made a solemn vow.

Clinton’s comments drew criticism from pro-immigration advocates who prefer the term “undocumented immigrants.” She was asked about the phrase in the Facebook chat on Tuesday by Jose Antonio Vargas, an activist whose group is mounting a campaign called “#WordsMatter” to get presidential candidates to promise not to use the phrase “illegal immigrants.”

“On behalf of the organization I founded, Define American, and the 11.7 million undocumented immigrants in this country — including myself — I am asking all the presidential candidates to recognize that #wordsmatter by committing to not using the term ‘illegal’ when referencing the undocumented population. Will you make that commitment?” Vargas asked.

Clinton agreed to stop saying “illegal immigrants” and pointed to her support for immigration reform.

We’re probably only one election cycle away from Democrat candidates complaining about microaggressions and demanding safe spaces.

Why is only one group of deliberate law-breakers singled out for your special compassion, Hillary? And don’t tell us that illegal immigration is a victimless crime, because we all know it’s not. Aside from the associated crimes like identity theft, tax evasion, etc., committed routinely by so-called “good, law-abiding” illegal aliens, there is also the matter of the hundreds of billions in tax dollars that illegal aliens cost American taxpayers every year.

So please explain to American voters, Hillary, why it’s okay for some groups to break the law in this country and victimize Americans, but not for others.

It should be unwanted or inconvenient emigrants. There should be an emphasis on the refugees or displaced persons crises with a focus on addressing causes, not treating symptoms. And certainly not administration of anti-native policies, including quietly compensating for the loss of life under the selective-child or pro-choice doctrine.

After Hillary groveled and apologized on her knees, she promised she would only use the phrase approved by the PC Language Commission (PCLC):

Our First Amendment rights are drifting away. Ted Cruz would reverse the flow.

My dictionary just threw up all over the bookshelf. What a mess.

I don’t use the term “illegal immigrant” either because it’s an oxymoron. If you are an immigrant you are here legally. If you are here illegally you are not an immigrant. Illegal refers to those who come here illegally by illegally crossing the border hence being a lawbreaker and having no right whatsoever to remain in this country. However it is not politically correct to speak the truth anymore and Hillary, wetting her finger to see which way the wind is blowing, would rather lie than speak the truth.

Why not use the legislative term: “illegal aliens.”

This business of insisting on continual changes of terminology is heckling. It’s purpose is to avoid substantive discussion by diverting the conversation to vocabulary that is always less and less accurate.

That woman is unbelievably stupid. She will say what ever gets the votes. I really think the votes are already counted. The World Bankers have selected her. She , if elected will treat everyone as pagan serfs, unless they are big donors. We must be careful who we can get into office. This is our last chance to stop the Marxist/Communists/Socialists.

And the other great thing is- everyone knows who Monica Lewinsky’s ex-boyfriends wife is. No explanation needed for using the term.

OK, good idea, but please add in the appropriate apostrophe.