Administration wants “to cut off debate rather than discuss foreign policy” 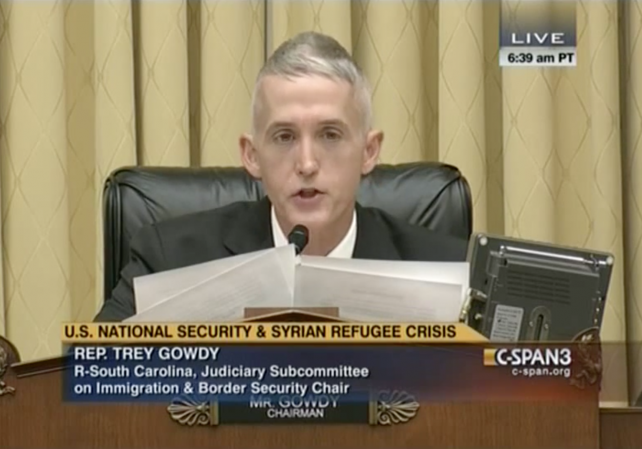 Wednesday, I argued that debate over the Syrian refugee crisis detracts from the heart of the issue — President Obama’s incompetency combatting radical Muslim terrorist cells.

Had this administration some semblance of strategy or will to win, the contentious and overly politicized refugee debate would be nonexistent. There would be no need for for the masses to flee heinously violent Islamist terrorists.

The better discussion here is not refugees that will take at least 18 months to vet, but how an absence of overall strategy has resulted in an emboldened ISIS.

Speaking from Turkey earlier this week, President Obama renewed his commitment to stay the course with the current strategy to fight ISIS (whatever that is) and admitted he has no interest in, “pursuing some notion of American leadership or America winning,” an attitude that become more obvious by the day.

Prior to Thursday’s House vote to halt President Obama’s Syrian refugee proposal, Rep. Trey Gowdy also argued that, “the people in charge of our foreign policy seem more interested in treating the symptoms,” rather than addressing why thousands are fleeing their homeland.

In his opening statement to the House Judiciary subpanel on immigration, Rep. Gowdy said:

This country has a rich and long history of welcoming those fleeing persecution. We have a long and rich history of liberating those suffering under oppression. We are the most welcoming country in the world and we are the most generous country in the world, and we help those in need both here and abroad. We administer that aide in greater quantities than anyone else. Our country has welcomed over 3 million refugees since 1975.

…It is because we are free and secure and an orderly society, rooted in public safety that we are at liberty of being generous to other people. Rather than address the underlying pathology that results in displaced people, the people in charge of our foreign policy seem more interested in treating the symptoms.

…There are refugees from the middle east and northern Africa because those regions are on fire and riddle with chaos and our bright lines and smart power and policies of containment or whatever we call it today, have failed. Terrorists took the lives of over one hundred innocent people in France and injured many more for no other reason than the fact that they could. They killed a hundred because they couldn’t kill a thousand and their objective is evil for the sake of evil, it is murder for the sake of murder.

We also argued Wednesday that there appears no cohesive strategy to combat, defeat, or annihilate ISIS. Rep. Gowdy’s statement reiterated this argument as well:

The president has said he’s too busy to debate the critical issue and unfortunately what passes for debate in this political day in age is the absurd conclusion about widows and orphans. It is precisely that kind of hyper-partisan conclusion designed to cut off debate rather than discuss foreign policy that has united this country with only this one fact — we have no idea what our foreign policy is in the middle east.

With the help of 47 Democrats, the House voted on a bill that would halt the President’s Syrian refugee initiative until further security measures could be in place. President Obama has threatened to veto the bill and Senate Democrats have promised the bill will not see the Oval Office desk.

The Collective is not concerned about national security. They never have been.

They hate us. They really do.

It’s time to put the pressure on our senators, all of them but especially the Democrats. We absolutely need a veto-proof majority. Here’s a letter I just sent to mine.

Sen. Brown,
I am deeply imploring you to vote along with 2/3 of the House and the vast majority of the American people who feel like we shouldn’t allow anybody into this country who can’t follow our rule of law and who can’t be properly vetted. The vast majority of Syrian refugees are probably good, decent people. But infiltrators will come in as well. The number one job of the federal government is to keep us secure. If you put the desires of non-Americans above your constituents, we’ll remember that on Election Day. Mark my words, we’ll remember that on Election Day. Benjamin Franklin said that “an ounce of prevention is worth a pound of cure.” He’s absolutely right. Keeping people out of this country who can’t be properly vetted may save American lives.
Just like Iran’s nuclear bomb which will have your name on it; if you again side with President Obama and one American is killed in a domestic attack, their blood will be on your hands. If the United States, with help from our allies, would come down on ISIS like the superpower that we are; there would be no need for Syrians and Iraqis to be fleeing their countries. President Obama’s air strikes are doing nothing to stop ISIS. It’s time the US stepped up and squashed Islamic extremism like the pestilence that it is.

Here is the letter I sent to my Senator….

Got that far and, after careful consideration, decided having a stiff drink was probably a more productive use of time.

buckey: Good letter but only seven democrat senators are up for re-election in 2016 and Brown isn’t one of them. He (and the rest) don’t care since they know the public will have forgotten their perfidy by 2018 or 2020.

Is it just me, or has Gowdy adopted a Trump hairstyle?

Aw Trey……..all we have gotten from you is a bunch of yadda yadda yadda. How about some action, crazyhair?

As far as I can tell, this bill does nothing to make Americans safer. All it does is pre-assign 3 scapegoats for when something goes wrong.

That was House Speaker Paul Ryan’s way of trying to stop the madness. The thing was that one of those 3 had just said he couldn’t vet the refugees.

What he can’t do is stupid and automated vetting (based on getting a “No” answer to the question of whether their home country knew they involved with terrorist groups.) That doesn’t mean you can’t vet.

Or at least his way to cover their a$$es. The one who said he said he couldn’t vet the refugees also said in his confirmation hearing that he was personally going to make the IRS investigation a top priority. What to believe?

That picture of Gowdy doesnt help the growing criticism from RINOs that he is not really a Republican, but a Manchurian-style candidate from the “Remulac” region of France.

Gowdy is saying this whole refugee issue is irrelevant.

Now about Obama;s strategy> It is, for now:

Step 1. Get a peace agreement in Syria – not even just a ceasefire – between all the groups that are not ISIS, including the Syrian government.

Obama thinks it will take Putin a maximum of four or five to realize the necessity of this.

He also doesn’t realize that such an agreement will have to include Israel and Hezbollah.