Free Yoga classes at U. Ottawa cancelled as form of “cultural appropriation”

Free Yoga classes at U. Ottawa cancelled as form of “cultural appropriation” 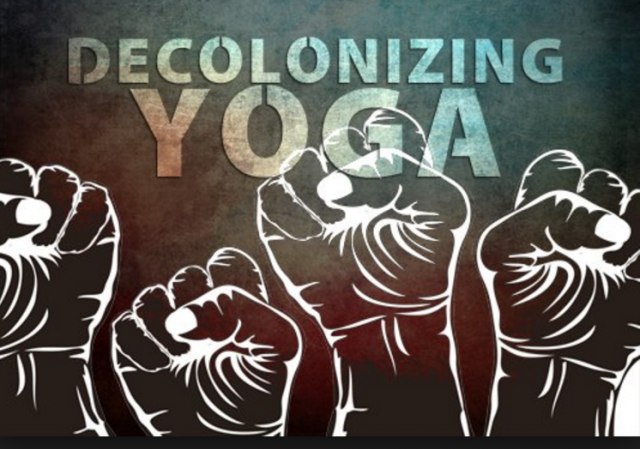 Now they’ve gone too far. Someone tell me this is a hoax, and we’ve all been had.

But, I fear this report from The Ottawa Sun is not a joke.

Student leaders have pulled the mat out from 60 University of Ottawa students, ending a free on-campus yoga class over fears the teachings could be seen as a form of “cultural appropriation.”

Jennifer Scharf, who has been offering free weekly yoga instruction to students since 2008, says she was shocked when told in September the program would be suspended, and saddened when she learned of the reasoning.

Staff at the Centre for Students with Disabilities believe that “while yoga is a really great idea and accessible and great for students … there are cultural issues of implication involved in the practice,” according to an email from the centre….

The centre goes on to say, “Yoga has been under a lot of controversy lately due to how it is being practiced,” and which cultures those practices “are being taken from.”

The centre official argues since many of those cultures “have experienced oppression, cultural genocide and diasporas due to colonialism and western supremacy … we need to be mindful of this and how we express ourselves while practising yoga.”…

Acting student federation president Romeo Ahimakin …. said the student federation put the yoga session on hiatus while they consult with students “to make it better, more accessible and more inclusive to certain groups of people that feel left out in yoga-like spaces. … We are trying to have those sessions done in a way in which students are aware of where the spiritual and cultural aspects come from, so that these sessions are done in a respectful manner.”

Scharf offered a compromise, suggesting she change the name from yoga to “mindful stretching,” since that would reflect the content of the program and would “literally change nothing about the course.”….

According to email correspondence between Scharf and the centre, student leaders debated rebranding the program, but stumbled over how the French translation for “mindful stretching” would appear on a promotional poster, and eventually decided to suspend the program.

What leads me to think this is not a hoax is that for years there have been claims that Yoga as practiced in the West is guilty of the crime of cultural appropriation. This article in XO Jane explains, Like It Or Not, Western Yoga Is A Textbook Example Of Cultural Appropriation:

As a fitness movement, yoga has swept across the US, and it’s been widely adopted in a variety of communities. It’s promoted for everything from supplementing physical therapy to help people recover from severe injuries to staying toned and fit for beauty pageants. Yoga is the New It Thing.

The problem is, that’s not yoga. What people in the US are referring to as “yoga” is actually one aspect of a larger spiritual practice. Practitioners in the US are using asana, or “postures,” a series of poses used to prepare the body for meditation.

Yoga actually includes a combination of exercises, which are intended to connect people with the divine. It’s an aspect of Hindu faith with origins that are thousands of years past, and a very lengthy history of practice across Hindu communities in regions like modern-day India.

There even is a website devoted to Decolonizing Yoga: 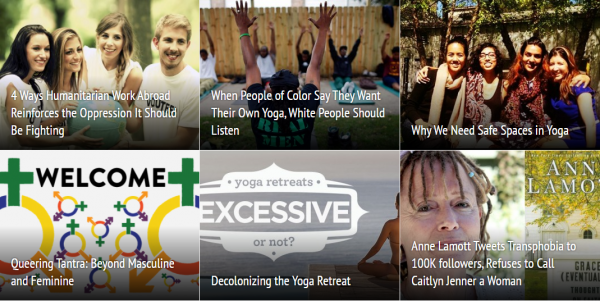 There is even a Yoga “Safe Space” movement: 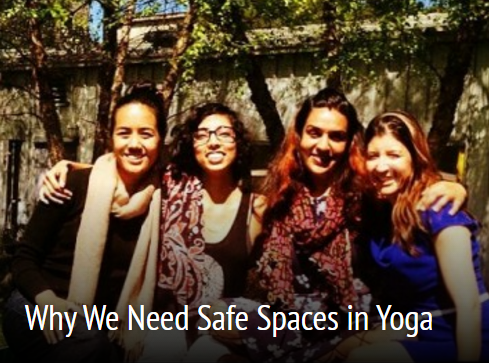 I emailed acting student president Romeo Ahimakin for further comment, but have not heard back yet.

Please, please say this was all a misunderstanding, and that

This should have been a parody Oleg Atashian (former Soviet propaganda artist-turned American conservative)of The Peoples Cube (www.thepeoplescube.com) comes up with.

But it’s not. And it’s dangerous. Even more dangerous, it’s emanating from the White House.

Yes. That demon in the WH is balkanizing the nation, stoking civil war, importing Muslims. The end result is the USA will be a nation conquered by his much loved “sand devils”.

Hmm. Perhaps we should stop modern popular music because it misappropriated — and perverted — African music?

… and all that Jazz!

You could just as easily say that modern popular music is misappropriated and perverted European music. It’s almost like exchange between different groups is how culture changes and grows, and the very concept of “cultural appropriation” is stupid, or something.

I’m thinking we need a zero tolerance policy towards progressives.

I’m thinking we need a zero tolerance policy towards progressives.

That works, from an Italian-appropriation viewpoint. Progressives were all gaga over Mussolini’s fascism back in the 1920s. Banish a progressive today!

“Yoga has been under a lot of controversy lately…”

Come to think of it, hardly a day goes by that I don’t run across an editorial discussing the raging controversy over yoga.

There is a Seattle based Yoga instructor for Rainier BeachYoga who decided to be a Progressive Princess and run a series of sessions for POC Yoga only. Not only were white people not allowed in class she put up a really obnoxious drama point that even if your spouse or partner is a POC or your friend is a POC and attending this class that if you are white you are not welcome.

Laura is of course white but felt so proud of herself for her diverse views and being a hater. She had POC instructors run the class no idea if Laura herself was excluded or if she expected behind kissing for her wonderful progressive nature.

She got slammed on YELP for it but managed somehow to get them to remove all the negative reviews and then by a miracle she had (family or etc) submit a whole pile of 5 star reviews for her yoga. Thus my opinion of Yelp is one star. I did not think someone could have negative reviews removed as long as they were true and there was evidence. People uploaded pictures of her yoga promo with the dramatic statement included.

Basically she is a racist and a hater but due to the direction of her racism/hate, she expects to be rewarded for her viewpoints. Evil B that she is.

So yes progressivism has spread to Yoga.

Well hells’ bells, guess I’m gonna have to stop eating at the local Mexican, Chinese, and Italian restaurants. This all American white boy doesn’t want to be accused of cultural appropriation!

You, my friend, are now a racist for refusing to eat at these ethnic restaurants.

I’d really hate to have to start eating the native food of my ancestral country. The very thought of haggis turns my stomach- I can only imagine what actual consumption would bring.

Self-hating, war-mongering, bagpipe-blowing Scots white boy, you and your kind don’t count — unless you can prove you gave some melanin somewhere, and by the one drop rule now resurgent, your life matters. Your alternative to mattering as you are is to go full Shawn King.

“The University of Ottawa offers a wide range of inter-university sports, including basketball, football, track and cross country, volleyball, swimming, rugby, soccer, and hockey, in addition to a number of additional intramural sports.”

At least they don’t have lacrosse. The Iroquois, Cree and other eastern woodland nations might get angry.

Don’t forget wrestling (Greek), mathematics (Greek and English–forget the Arabs; they appropriated other people’s cultures and called it algebra. Marathons (Greek), ping pong (whomever), lawn tennis (Brits), Chemistry (Brits and French), and the list goes on and on. Barbarian philistines.

We’re in the USA for Christ’s sake! EVERYTHING in this country was “appropriated” from someplace else. Fucking morons.

We’re in the USA for Christ’s sake! EVERYTHING in this country was “appropriated” from someplace else.

University of Ottawa is in Ontario. Last time I looked that was in Canada. Looks like Justin Trudeau is spreading the flames of PC as quickly as he can.

The morons in the USA are no different.

Well now that is embarrassing. I must have been looking at Obama’s map of the US… the one with 57 states.

Ontario is in southern California; everyone knows that.

What fools these millennial mortals be! They have locked themselves into boxes of stupidity from which there is no escape.

Not a one will be able to practice the language or arts of another people.

Not a one will be able to become fluent in and teach another language.

Not a one will be able to visit another country and wear its national garments. (Lots of humor in that especially when the locals outfit you themselves. The fun and laughter is amazing!)

Not a one will be able to participate actively in another country’s holidays. (No dragon dancing on Chinese New Year. No saying: gong he fa cai, hong bao na lai. No hong baos for them. Hong baos are free money, bèbè! No dancing on Eastern Parkway on Labor Day!)

Not a one will be able to venture outside their cultural borders and appreciate the beauty of humanity and human achievement because of their absurd minimalist weltanschauung.

“The centre official argues since many of those cultures “have experienced oppression, cultural genocide and diasporas due to colonialism and western supremacy…”

Hey ho Calculus has got to go!!!

Watch the h8ing, man. Isaac Newton is only responsible for English Calculus. Some dude named Gottfried Wilhelm Leibniz is responsible for the dy/dx notation we use today. Of course, Gottfried was a White, European man.

this attitude works both ways. if they dont want me to culturally appropriate their cultures, i dont want them to financially appropriate my money. no more meals in ethnic restaurants, travel to non-european destinations, music from formerly colonized countries, products made outside the US. call it a boycott if you will, but i’m not into abuse and guilt.

Be careful. If they don’t “appropriate” our culture, how will Coca-Cola help to fuel “American Cultural Imperialism” and sell stuff all over the world? We want them to submit to our cultural imperialism. What about Ford and Hollywood?

I can almost hear the culturally sensitive yoga proponents in Ottawa clamoring to give up their flush toilets and cell phones.

Apparently we need a safe space FROM yoga, now that it is clear all those yoga classes are designed for proselytizing for the Hindu religion. Freedom FROM religion demands shutting down all open displays of yoga stretches in public places. /sarc

Is there any misappropriating going on when men act like women? When Title IX scholarships start going to men that think they are women, there may be revolt.

Many laughed off the D’Souza book about Obama’s view of America as colonialists, guilty of absconding with other nations goods, culture and even their people. But the diversity queens on campus show that view is indeed prevalent. American dominance and success only indicates guilt, to the PC nuts.

But it’s hard to tell when the crazies are serious. Maybe they just want a private space, and playing victim is the proven method of getting special treatment.

What these morons are trying to do, is essentially eliminate international intercourse and with it international trade. Europe and America would sink into their own little xenophobic squalor, and the Turd World would die. Literally. Typical of Lefturds, their proposed action would kill millions.

Progressive Liberalism is the religion of death.

“Mindful stretching” is a much more accurate description than “yoga” for what goes on in classes such as this.

Who needs it? YOGA SUCKS!

You know this country is messed up when you can’t even sit “Indian-style” anymore.