ISIS may have sent social media signals 72 hours before attack on Paris. 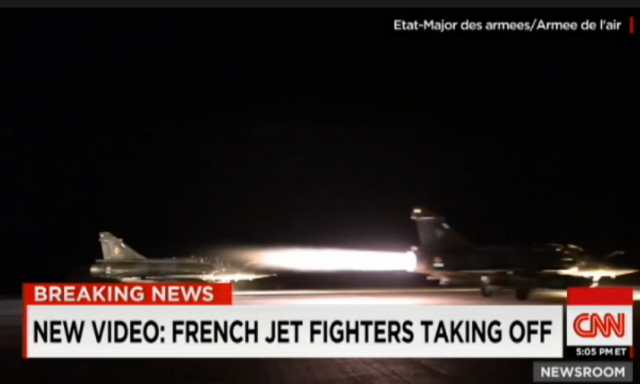 French jets struck ISIS targets in Syria this Sunday night, destroying a jihadi training camp and a munitions dump in the city of Raqqa, where Iraqi sources say the Paris attacks were planned.

Twelve aircraft including 10 fighter jets dropped a total of 20 bombs in the biggest air strikes since France extended its bombing campaign against the extremist group to Syria in September, a Defence Ministry statement said. The jets launched from sites in Jordan and the Persian Gulf, in co-ordination with U.S. forces.

Meanwhile, as police announced seven arrests and hunted for more members of the sleeper cell that carried out the Paris attacks, French officials revealed to The Associated Press that several key suspects had been stopped and released by police after the attack.

A review of social media records shows there were warnings that terror cells were about to launch a major attack on the iconic city.

ISIS claims of responsibility for Friday’s Paris massacre are being reviewed by US intelligence analysts Sunday morning, with a focus on the English-language version, which is delivered in American-accented English, Fox News has been told. It is now clear the plot included a rollout of ISIS propaganda, which was prepared in advance, including threats directed toward the Russian people, Rome, London and Washington DC.

Separately, Fox News has learned that four credible, ISIS-linked social media accounts began sharing messages 72 hours before the Paris attack, including images of weapons, the Eiffel tower, as well as blessings for the attackers’ mission. A military intelligence source says the social media traffic is now seen as evidence the three teams had gone operational.

The translations include “God bless you in your mission” and “Support the deployment,” as well as a reference to our “sister,” suggesting an operative, or member of the support team was a woman.

There is no doubt that Europe will be at the epicenter of future attacks. An ISIS operative indicates over 4000 potential jihadis are in Europe in the guise of refugees:

The ISIS smuggler, who is in his thirties and is described as having a trimmed jet-black beard, revealed the ongoing clandestine operation is a complete success.

The Islamic State operative spoke exclusively to BuzzFeed on the condition of anonymity and is believed to be the first to confirm plans to infiltrate western countries.

French investigations into the terror cells that perpetrated the massacres has lead to the neighboring country of Belgium.

The investigation into Friday’s attacks, the worst atrocity in France since World War Two, led swiftly to Belgium after police discovered that two of the cars used by the Islamist militants had been rented in the Brussels region.

By Sunday, Belgian officials said they had arrested seven people in Brussels. But one of the people who had hired the cars slipped through the fingers of the police. He was pulled over on the French-Belgian border on Saturday, but later released.

Police named the man they were seeking as Salah Abdeslam, saying the 26-year-old was “dangerous”. Although he was born in Brussels, French authorities said he was a French national.

Ok, how sad is it that the French have more fighting spirit against these terrorist than our own administration.

An ISIS operative indicates over 4000 potential jihadis are in Europe in the guise of refugees:

I heard some Euroweanie official on the news say “We must not associate the migrants, with terrorists”.

Yeah, good luck with that.

Not since the American military and diplomatic corp under the Bush administration performed a remarkable feat to stabilize and reconstruct Iraq has there been so much renewed hope for change under Russian leadership. I guess the French have had just about enough of Obama and progressive liberals’ war binge, social activism, and destabilizing efforts throughout the Middle East, Africa, and Europe.

Gay Patriot asks a couple of good questions regarding this:

“Obama has supposedly been bombing ISIS for months. Why is there still a command center for France to bomb?

Today I saw numerous references to this French bombing campaign as “massive” and the like. I’m sure if you were on the receiving end of even a single 2,000 pounder it would seem “massive.” But, some points of reference:

During the first gulf war the US led coalition averaged 1,100 sorties per day.

Oblamo’s “strategy” to contain ISIS lately has involved about 7 sorties per day.

Of course ISIS – if Buzzfeed’s source really is ISIS anyway, always tells the truth to Buzzfeed.

This isn’t the first exclusive interview Buzzfeed has had with a self-proclaimed terrorist, or terrorist supporter.

They ought to make this an advertisement.

Read Buzzfeed, the most important source of news you can find, rated #1 news source among Islamic terrorists!!

When an urge to tell the truth or reveal secrets hits someone, they all pick Buzzfeed as their outlet. Not the AP, not the New York Times, not ABC, CBS or NBC – they all go to Buzzfeed!

– Or the Daily Beast maybe.

Anyway, see for example: (from January)

In fact, Buzzfeed is the recipient of all kinds of helpful information from terrorists and people helping terrorists:

The murky nature of Hassan’s business means that his account can’t be verified without putting his life at risk. He keeps no records of his illegal trade, and contacting the alleged ISIS fighters involved would let them know he had taken their story to the press.

But only to Buzzfeed.

But he had qualms. “But eventually Hassan reconsidered. While he had no problem with the idea of ISIS fighters attacking government targets in Europe, he worried about civilian casualties”

Actually, another smuggler told Mike Giglio that that scenario was quite impossible. They’d eventually all get caught especially if they applied for asylum. (Their stories wouldn’t stand up)

Another claimed that he did smuggle some, but only as a separate group, which, of course, is the only way that would make sense. Quite the opposite from blending in. But that’s also probably not true.

Only rinky-dink news outlets like Buzzfeed (or probably the Daily Beast) would let themselves get fooled this way:

The ISIS smuggler, who is in his thirties and is described as having a trimmed jet-black beard, revealed the ongoing clandestine operation is a complete success.