Belgium locked down due to maximum alert; Atlanta a possible target? 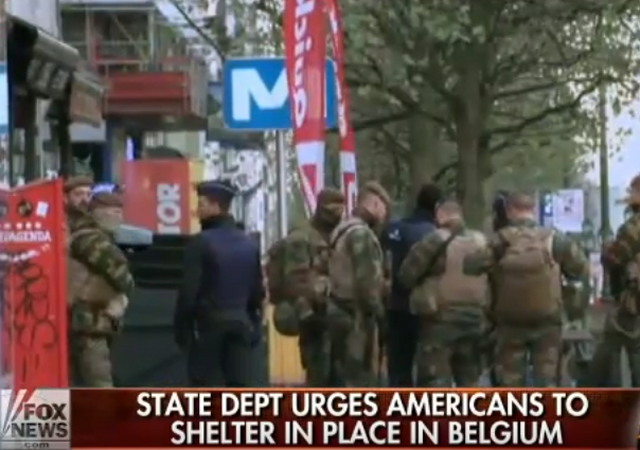 Authorities in Europe are tense due to warnings of another attack or wave of attacks. Belgium has raised its terror alert to the maximum level and has nearly shut down.

Brussels in lockdown after terror threat level is raised to maximum

Brussels has been blanketed with security after the Belgian government raised alert levels on terrorist threats to the maximum, warning of the “serious and imminent” possibility of a Paris-style attack involving firearms and explosives.

The city’s metro system was closed down on Saturday until Sunday afternoon at the earliest as shops shut, shopping malls were partly shuttered, professional football was cancelled, concerts were called off and music venues, museums, and galleries closed their doors for the weekend.

The heightened alert level followed meetings of the national security and counter-terror services late on Friday, which concluded, on the basis of undisclosed evidence, that a major attack was being planned in Brussels. The rest of the country was put on a level three alert, one level short of the maximum.

The measures are thought to have been implemented over fears that Salah Abdeslam is hiding in the Brussels area. The 26-year-old Frenchman is believed to be one of the ringleaders of the Paris attacks in which 130 people died last Friday.

In a strange twist, the hacker group Anonymous claims to have gained intelligence of imminent attacks.

Bradford Richardson reports at The Hill:

The hacker collective Anonymous says the Islamic State in Iraq and Syria (ISIS) is planning to launch attacks in the U.S., Paris, Indonesia, Italy and Lebanon on Sunday.

OpParisIntel, the name of Anonymous’ mission against ISIS, released a statement Saturday saying it had uncovered information regarding new terror plots “on Paris and the world” scheduled for Nov. 22.

“All proof was submitted to official authorities all around the globe days ago,” the statement said, as first reported by the International Business Times. “They have it and it is their responsibility to do something with it. But because they have not done anything with it yet and it’s almost the 22nd, we have matters into our own hands.”

“We only take the responsibility of warning civilians (incase the authorities do not act well enough),” the statement added.

Anonymous warned against attending events with large crowds, especially church services, but added that “the risk of any churches outside Paris/France being targeted is low.”

“The goal is to make sure the whole world, or at least the people going to these events, know that there have been threats and that there is possibility of an attack to happen,” the statement said.

The threats about which Anonymous warn are not confined to Europe.  The Hill continues:

It listed several events in Paris that it said “have been confirmed are at risk” and several events around the world that are not yet “100% confirmed,” including a major WWE pro wrestling event in Atlanta, Ga.
WWE said the event will still take place as scheduled.“WWE Survivor Series is currently scheduled as planned while we investigate the matter with federal, state and local authorities,” WWE said in a statement to The Hill.

I would have thought the last place the terrorists would strike in Belguim, because they are based there.

On the other hand, now that we know and realize that that is their sanctuary, and the authorities are going after them in a big way, thinbgs might be different.

The suddenness of the alert might indicate two possibilities:

Either that they have intercepted some communications indicating that somebody has given some orders or advice saying “do as much destruction as you can now before it is too late.”

Or it’s like the day when the Tsarnaev brothers were identified or nearly identified and on the run. They had abandoned their hideout and left. And did indeed, it turned out, have a bomb with them. And they were heading toward New York.

The fact that the Belgian authories said they would re-evalate the situation tomorrow may indicate this is connected to Salah Abdeslam being on the run, and possibly a abandoned safe house being discovered, and not some kind of interceotion message or warning from ISIS. The shutdown, combined with the ntice to await further instructions tomorrow, also looks a little like Boston, and if they get a good handle where he is in or around Brussels, they’ll limit it more to a certain section.

If they have evidence of an attack being planned, I suspect it was being planned everywhere except in Belguim. Belguim is the arms depot. This is a new situation.